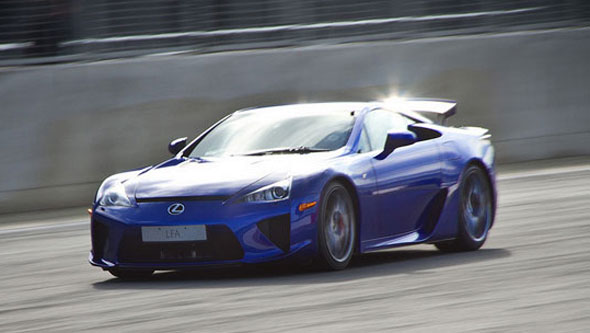 The Lexus LFA has been widely acclaimed since its launch two years ago, for its incredible hi-tech engineering, brutally powerful V10 engine and pioneering construction.

But this weekend could offer the best chance yet to see the car as it appears on Top Gear (Sunday, BBC Two, 8pm) as Jeremy Clarkson takes the wheel on one of the show’s famous adventures.

The LFA has given us so many highlights over the years, so now’s the perfect time to take a look at some of our favourite moments.

The LFA versus the IS F

A battle between two powerhouses took place in 2011 with the LFA taking on the IS F.

The LFA breaks the Nurburgring record

The Lexus LFA was made for the Nürburgring – almost literally. Car and track proved to be perfectly matched when the Lexus LFA Nürburgring Package broke the record for the fastest lap time in a current, regular production car.

Petrolhead and US talk-show host Jay Leno has bagged a world exclusive with his first drive video of the Lexus LFA Spyder.

The LFA at Silverstone

Our lucky ‘LFA At Silverstone’ competition winners Tim, Jon and Oli hit the track and we were there to see how they handled LFA No. 016.

The LFA at Goodwood

We rode shotgun as the LFA went up the hill at Goodwood, and managed to grab some video that shows exactly what it’s like to hear the V10 engine in action.

Owners were invited to an exclusive track day event at the Laguna Seca circuit in California last month, creating the biggest LFA gathering seen to date.

Lexus LFA #304 was delivered to Australia. There was, however, something that makes this particular LFA rather special.

Have you ever seen the LFA in action? What did you think?