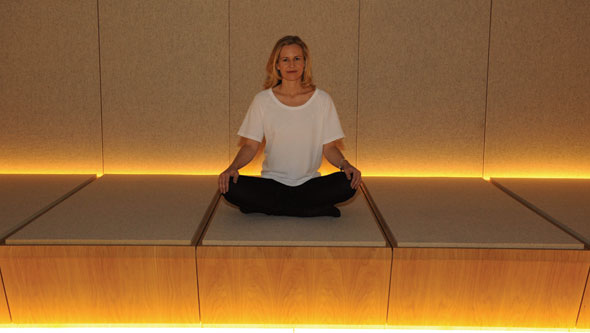 Even the most hardened shoppers sometimes need a break from full-on retail, so Selfridges is resurrecting a Silence Room alongside other noise-cancelling initiatives to provide respite, writes Guy Bird

Whether shopping fills you with dread or wonder, Selfridges’ Silence Room could become a real boon for those in need of a moment to mentally and physically re-group away from the hustle of the retail experience – especially when it’s London’s Oxford Street at the weekend.
In fact, the idea of a Silence Room is not new. The store’s legendary founder Harry Gordon Selfridge – currently the subject of ITV drama Mr Selfridge – had one in his store as far back as 1909. The new one, a cool and calm minimalist space designed by architect Alex Cochrane, has transformed the London store’s Ultralounge and is available to frequent until the end of February as part of the store’s wider ‘No Noise’ initiative.

A  simply-lit long bench following the walls of this room is the only intrusion and to ensure tired punters aren’t bothered by the visual or audio accessories of others, all visitors are asked to leave shoes, mobile phones and other 21st Century distractions at the door.

Alongside this silent space, Selfridges is suggesting other quiet in-store activities. A curated ‘Quiet Shop’ area offers visually de-cluttered products that have had their brand names removed – from Levi’s jeans that only have a red tab on the back pocket to Marmite jars minus the Marmite name. Cleverly, the brands that have got involved have worked on the hunch that their products’ logos or design alone are enough to identify them, thus adding even further to their brands’ kudos. Other labels like Maison Martin Margiela, Jil Sander and Diesel have chosen to exhibit ranges of de-branded staples from T-Shirts to jewellery.

Teaming up with the Headspace organisation, staff have also been having chill-out sessions, including a 500-strong mass meditation in the make-up department (see photo). The inner peace won’t just be the preserve of the London store either. A Headspace Pod will be travelling between Selfridges’ Manchester and Birmingham stores and a showcase of foods with well-being in mind will be offered at the Trafford store in Manchester too. As Alannah Weston, Selfridges creative director concludes: “Selfridges’ No Noise is a project which invites customers to find a moment of peace in a world where we are bombarded by a cacophony of information and stimulation. We hope that people will enjoy the restorative qualities of quietness by visiting our Silence Room and by participating in a specially curated programme of quiet experiences.” Quietly excellent.