Last year’s line-up consisted of a pair of Lexus RC F safety cars and a Lexus IS 200t F Sport course car. Now for its second year of partnership with the championship, Lexus has filled the vital missing link in the support fleet. Headlining the group for the 2016 season is the new Lexus GS F, which will provide critical support during life-threatening emergencies as the new official medical car. 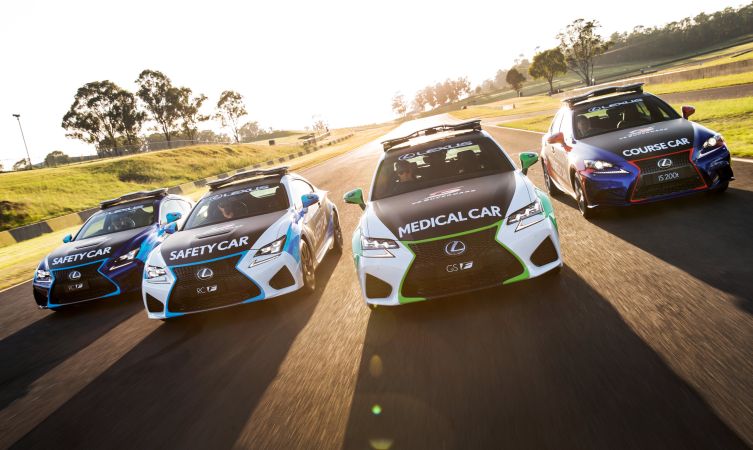 Thanks to its powerful 5.0-litre V8 engine and dynamic chassis, the GS F was singled out for its potential to scramble to accidents with impressive pace, while its spacious, four-door saloon body provides ample space to accommodate lifesaving equipment and medical personnel.

Lexus Australia chief executive Peter McGregor is convinced the GS F is the ultimate vehicle for the medical car role: “The new GS F perfectly integrates the honed performance of the Lexus F line with the acclaimed GS to deliver a supremely balanced, engaging saloon.

“It will provide a reassuring presence in V8 Supercars this year, ready to deploy [medical staff] to the scene of accidents so [they] can provide drivers with urgent medical attention.” Medical delegate Dr. Carl Le was similarly enthused, commenting: “Although I hope not to attend medical emergencies at all this year, it is comforting to know I have something as capable and potent as the Lexus GS F if the need arises.

“It also looks absolutely brilliant, which is an added bonus.”

Learn more: What was the first Lexus F line car?