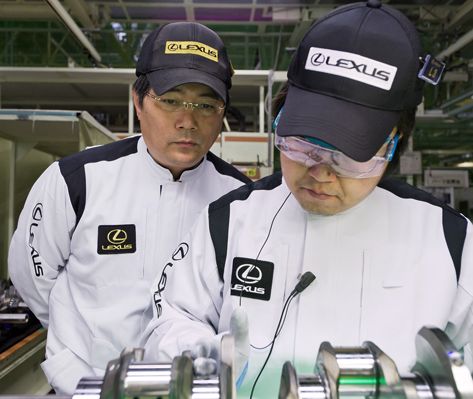 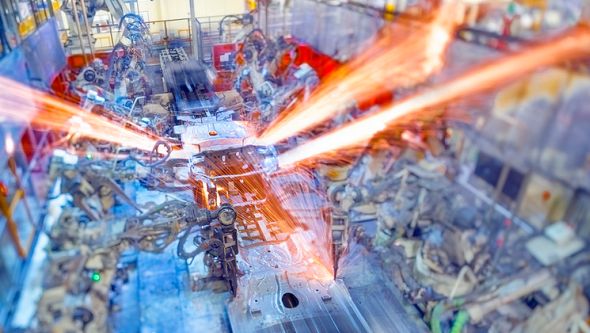 Lexus recognises that no machine can match the perceptive power of a skilled person.

Within the Tahara factory in Japan where every Lexus IS, GS and LS is made hang banners bearing the slogan, ‘Takumi skills for perfect Lexus quality’.

The Japanese word takumi refers to an artisan or master craftsman. In the Tahara plant there are ten takumi, incredibly skilled experts with at least a quarter of a century of experience within each of their respective fields. Positioned as team leaders, they maintain Lexus traditions by fostering new talent, teaching skills and processes, and delivering the highest quality end products. Let’s meet them. 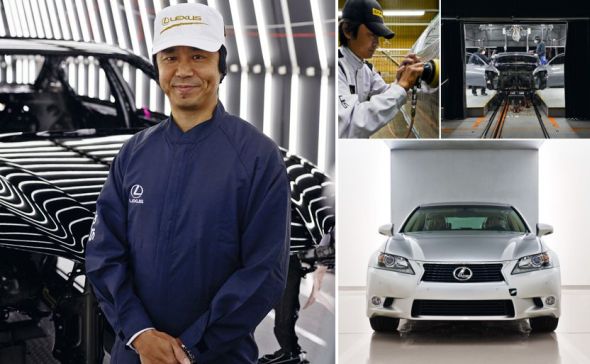 Sakakibara has eyes like a hawk and is able to spot the sort of paint blemishes that other carmakers would overlook. It is a skill perfected by almost thirty years in the paint shop. No car leaves the factory without inspection from Sakakibara’s station. “We cannot let our vigilance lapse,” he comments. “The people who buy our cars have sharp eyes and an appreciation of beautiful, lasting quality.”

But Sakakibara’s experience extends beyond signing off the end product. He also assists the programmers of the robots that apply the paint, ensuring a more human-like nuance and sensitivity to the laying of each coat.

Not only can Suganuma instinctively spot an abnormally assembled body, he uses his knowledge of the entire assembly process to quickly assess the point in production where the problem was introduced.

Although most of the welding is carried out by takumi-programmed robots, the precise fitting and careful adjustment of bolt-on parts is almost entirely done by hand. Only a couple of minutes are usually available to make fine adjustments to the fitment of the bonnet, doors and boot before each body disappears for painting. Misalignment by just a millimetre is immediately noticed and rectified, and the team is kept on its toes in the knowledge that Suganuma sneaks a vehicle with a minor fault down the production line every single day. And before you ask, not one of these has ever slipped past the team…

Tashima thinks in terms of microns, where seemingly insignificant objects such as a stray fleck of dust or a strand of hair on the body stamping press will show up on the body surface and affect the finished quality of the vehicle.

Yes, Tashima’s intense visual scrutiny and sense of touch can detect such tiny indentations and scratches, and he expects the same level from every member of his team. “This is not something you can ever quantify and leave to a machine,” he reveals. “The only way to be sure that [a defective] mould is smooth is to run your own hands over it. It can take more than a decade to develop that skill and knowledge. Each one has to be as flawless and perfect as the next.” 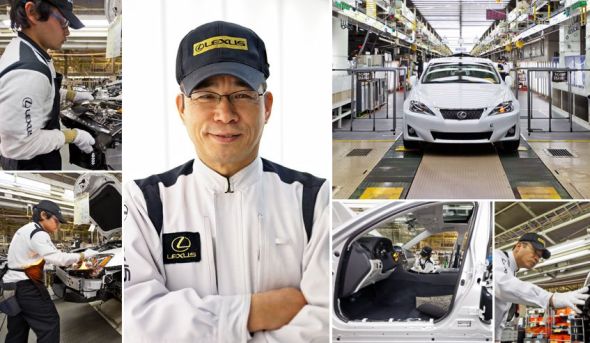 In his role of preparing new models for production, it is Tanaka’s job to decide the order in which parts should be assembled. During assembly itself, Tanaka leads and instructs a team that completes the work started at the press, body and paint stations.

Among the 350 steps under his responsibility, the team bolts on doors and wheels, attaches headlights, inserts the dashboard and connects the electrics – a total of 2,800 parts that need to be precisely aligned and connected correctly within a time frame of just two minutes per car. “It is my responsibility to make sure that each worker maintains their skill set. To make sure of this, I check their work with my own eyes every day, and give them personal advice and instruction,” he says.

During his 40-year career, Takeda has seen bumpers evolve from polished chrome to black urethane before moving into body-coloured plastic resin. Now designed as a seamless element of the overall design, it is essential that the paint quality, shine and colour of the bumper matches that of the rest of the body.

Though robots tackle the majority of spray work, the most perfect, evenly applied layer of paint can only ever be applied by a takumi-trained specialist. It’s about constantly articulating the spray head to match the curve of the panel and keeping a set distance away from the surface. The form, timing, technique and speed of each student is examined and referenced against a video of Takeda working as the takumi master. It’s a method that can take years to perfect.

Within Koga’s sphere of responsibility, piecing together the dashboard is the team’s biggest challenge. “It sits right in the driver’s line of sight, so the slightest problems will be visible,” he commented.

Similar to other takumi masters, Koga uses the sensitivity of a gloved hand to feel for tiny imperfections such as wobbly stitch lines, imperfections in the grain of the dashboard, uneven swellings within the underlying foam – all less than one millimetre in severity. Incredibly, these sort of faults are more reliably identified by touch rather than with the scan of a machine.

Koga insists on one thing from himself and his team; perfection. Every four months he tests the team’s skills and settles for nothing short of flawlessly completed tasks, but within that period he has honed his own skills four times by jumping on the production line for self-training sessions. On top of this, every few years he moves to a new section of the plastic moulding line to master another area. No wonder his staff talk about him in awe.

Hideya Segawa possesses a bloodhound-like determination to track down the source of any squeak, smell or vibration. He ensures that every Lexus coming off the production line is visually inspected for flaws and subjected to a series of tests on simulators and machines, not to mention driven on a few laps of the 4km-long test track that includes a variety of road surfaces.

While gadgets like hypersensitive microphones and road simulators are used to pick up unusual noises, Segawa points out that, “No matter how many machines you use for testing, humans are better at finding something that isn’t right.”

Because of this he puts every trainee through hours of listening drills, which enable them to identify and isolate every sound in the car, from the propshaft and gearshift to the axle and fuel injectors. A Lexus is designed to deliver an aura of solidity and calm from the cabin, and remain so throughout its life.

Most of us didn’t even realise there is a front and back side to a sheet of paper. Yet Eiji Goto possesses the rare ability to be able to identify the difference between the textures of each side with a single touch.

As the takumi of engine parts, it is his job to ensure that every mechanical component – crankshafts, engine blocks, cylinder heads and camshafts – turns out as intended in the original blueprint. So although each is precision machined, parts are only approved after they have been visually and physically inspected by Goto and his team. Their hands seek out minute flaws that untrained eyes would never notice, while further inspections with magnifying glasses and endoscopes ensure the exterior and interior surfaces match Goto’s perfecting standards. In fact, there is a 250-point check list to run through. 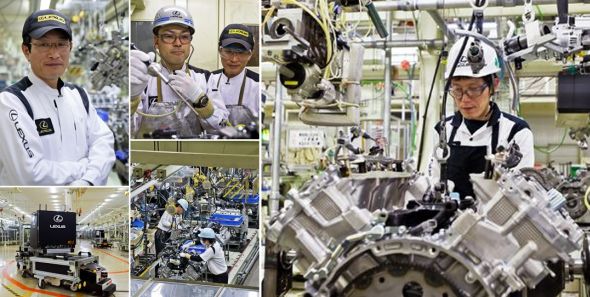 Similar to the conductor of an orchestra, Kayashima knows precisely what sound an engine should make when the 20 noise-making components hum in perfect harmony. So while a bank of computers analyse the power, torque and responsiveness of a freshly assembled engine, Kayashima uses a modified stethoscope to listen to the engine working from various strategic points. If an engine passes this aural test it moves to the next stage.

Interestingly, the final test is reminiscent of the first Lexus LS advert. Kayashima’s inspectors place a cocktail glass on top of the engine while it’s running. The glass is filled to the brim with a pink liquid and if any spills out the engine doesn’t meet the grade and will not meet the consumer.

At their most productive, Kayashima’s team can manufacture and intensely scrutinise up to 12,000 engines a month. What they do during this most intimate aspect of the assembly process could never be replaced with machines.

Where other takumi rely on silence in order to do their job, Yoshimura wouldn’t feel comfortable without the deafening din inside the engine casting area. His skill set is akin to an award-winning chef, knowing the precise alloy compounds, chemical compositions, and heat needed to make a perfect engine cast. It is a recipe that he tests daily and routinely analyses to protect against unwanted impurities.

Unlike other engines, the block of a Lexus engine is usually more complicated in structure, full of fluid contours, divots and tiny details that need to be visually checked for perfect casting. It is these details that make the casting more difficult yet also makes the Lexus engine run more smoothly.