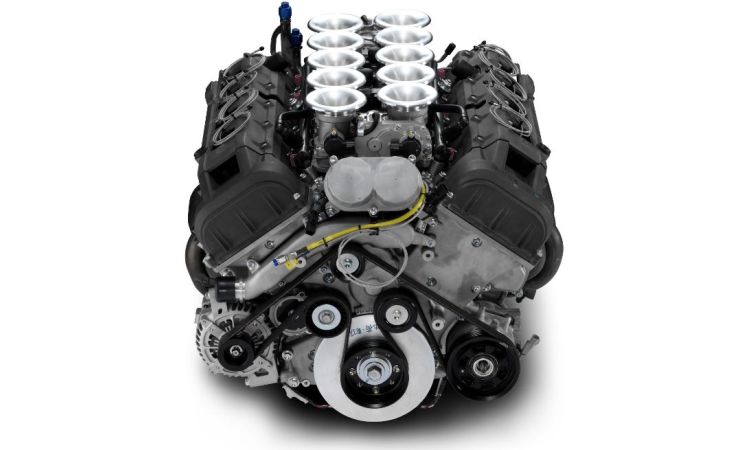 Making the LFA was one of the greatest engineering challenges ever undertaken by Lexus. As well as developing new technologies, materials and processes – irrespective of the difficulties encountered in their adoption – the model recalibrated the world’s perception of Lexus as a performance car manufacturer. 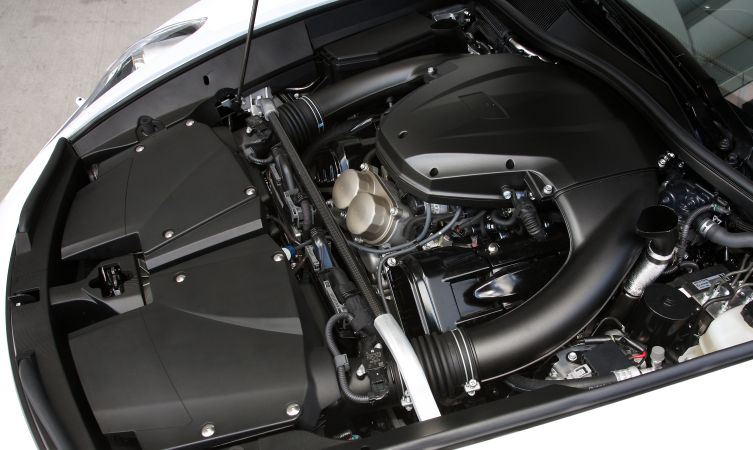 At the heart of this supercar was the breathtaking 1LR-GUE engine, a bespoke 4.8-litre V10 that is widely regarded as an engineering masterpiece. Rich in motorsport technology, it was endowed with an exceptional peak output of 553bhp at a soaring 8,700rpm. A specific output of 115bhp per litre made it one of the most powerful engines ever unleashed in a production road car.

Surprisingly compact and constructed from exotic aluminium, magnesium and titanium alloys, the dimensions of the engine were equivalent to that of a traditional V8 yet it remained as light as a conventional V6. 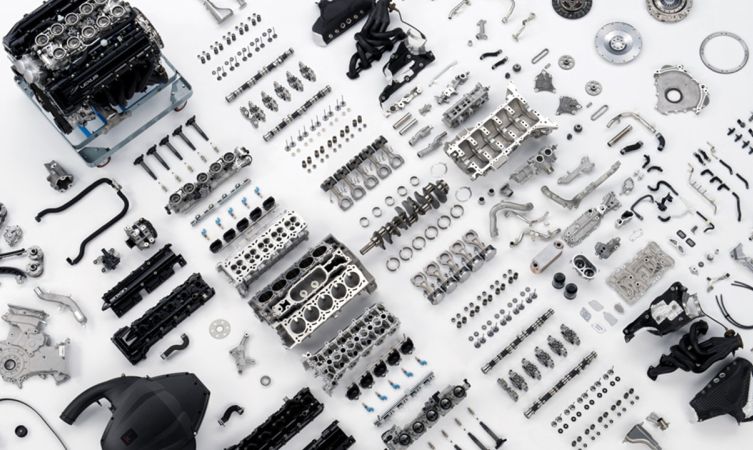 Inside you would find moving parts manufactured to incredibly high tolerance levels, beginning with a fully integrated lightened crankshaft acting on titanium alloy conrods that were 40% lighter than equivalent iron components. These, in turn, connected to lightweight forged pistons designed to cope with the pressure of a high 12:1 compression ratio and the capacity to shuttle backwards and forwards at approximately 25 metres per second at the rev limit.

The 72° angle between each bank of cylinders was wider than most other V-formations but this was determined as the optimum point for balancing the primary and secondary movements of the internals for smooth operation. It also created a neat valley that was used to position both the oil cooler and positive crankcase ventilation chamber. 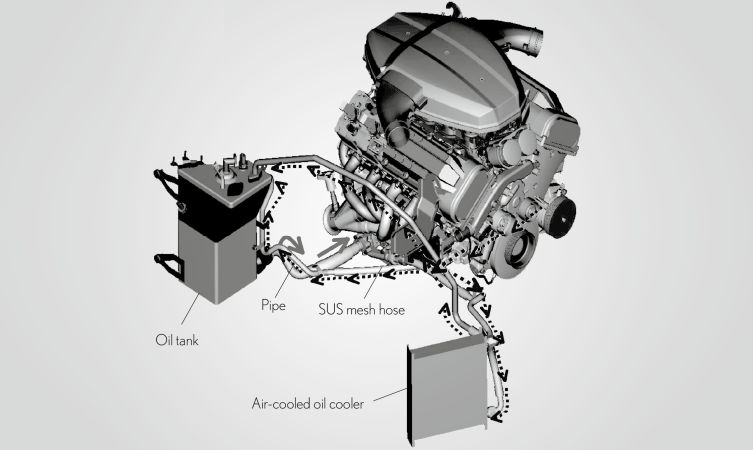 Similarly non-conformist was the fitment of dry sump lubrication, a feature usually only found on dedicated race cars. By deleting the traditional wet sump from the bottom of the engine and directing oil to specific parts through an external ventricular arrangement, the V10 was able to be located deep within the chassis. This lowered the LFA’s centre of gravity, which improved its resistance to G-force loadings. And because lubrication was supplied at a constant pressure, the oil could not cavitate from where it was needed. The LFA was therefore able to handle sustained high-speed cornering in excess of 2G.

An unwavering focus on low inertia and low friction enabled the V10 to rev from idle to its 9,000rpm red line in just six-tenths of a second, yet remain as refined and reliable as any other Lexus powerplant. Interestingly, this incredible ability to gain and lose revolutions meant that Lexus had to design a new digital rev counter for the cockpit, since an analogue meter simply could not keep pace with the engine.

In view of this accelerative performance, the valvetrain hidden behind the magnesium alloy cylinder head covers also came under intense scrutiny. Light but strong titanium alloy was employed once again in the construction of the valves, while the valve springs were cylinder-shaped and of a low-inertia design to remove the chance of valve float at high revs. These were partnered with ultra-lightweight solid rocker arms featuring a special diamond-like wear-resistance coating and integrated oil jets. 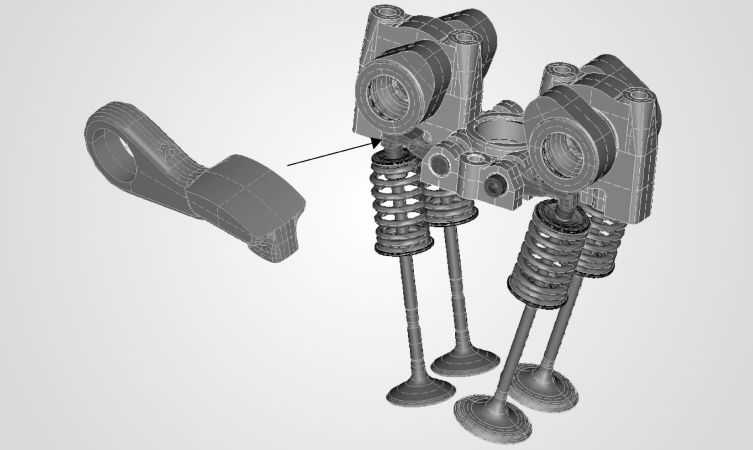 Meanwhile, the application of intelligent variable-valve timing on both the intake and exhaust cycles allowed the engineers to tune the ECU to produce at least 90% of the V10’s formidable 354 lb/ft torque peak from 3,700rpm upwards.

The engine was also designed to deliver linear and predictable power through natural aspiration. Each of the ten cylinders breathed through its own independently-controlled throttle body trumpet (see main image) rather than being force-fed by a multiplication of turbos.

This short, direct airflow into the engine was a key element in the hyper-responsive feeling coming through the throttle. But another factor was an innovative calculation programme that used throttle position to estimate the total air intake volume that would be required for the engine to perform. Using this driver input information, the system was able to prime each 12-hole injector to deliver the appropriate volume of fuel for any given engine speed and load. So precise was the air and fuel management that the engine exceeded existing emission regulations. 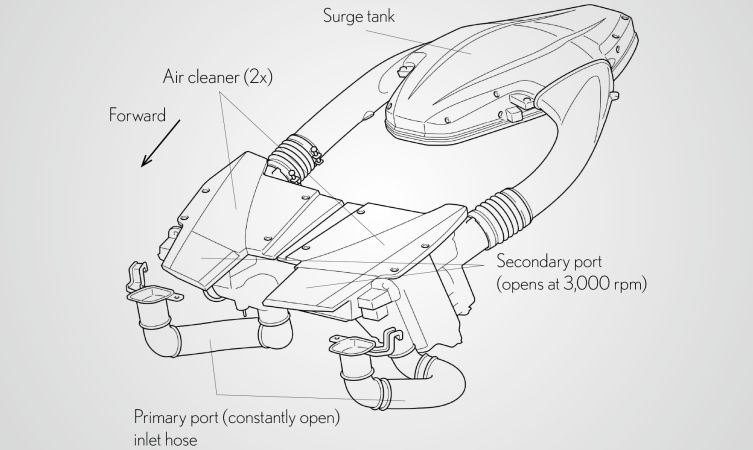 The LFA’s symmetrical dual intake system was tuned like a musical instrument. Has any other engine been able to compete with its induction roar?

Incoming air arrived through a dual intake system that switched from a primary inlet port at low to medium speeds to dual ports at higher revs to boost breathing efficiency. Within the intake system was a surge tank responsible for generating the engine’s F1-style induction roar. Inspired by the design of musical instruments, the tank was horizontally split and tuned using rigid walls with horizontal ribs to generate optimal acoustics.

After combustion, spent exhaust gases exited through a true dual system beginning with equal-length exhaust manifold runners, a layout that enhanced torque through optimised back pressure and created a crisp sound quality.

Harmonic management was also used at the titanium dual-stage rear silencer, which incorporated a valve-actuated structure to either minimise or maximise exhaust sound. Above 3,000rpm all sound-deadening chambers were by-passed; the exit route straightened and the engine announced its delight at being unleashed with a spine-tingling scream. 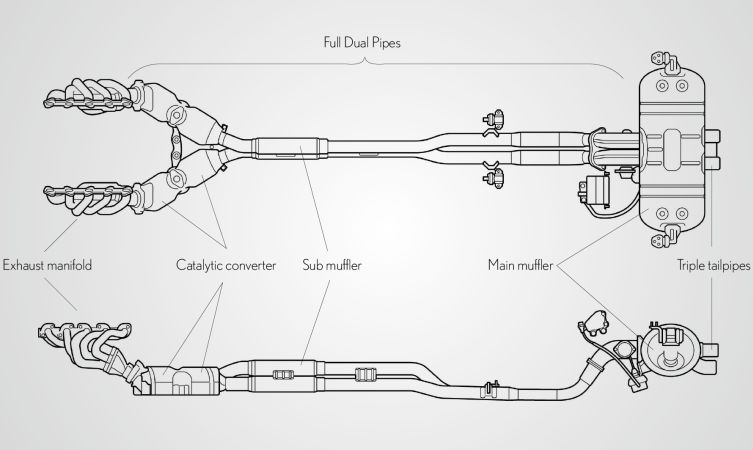 This wasn’t just for the benefit of onlookers, however. Induction and exhaust sounds were directed into the LFA’s cabin through three channels, giving the driver centre stage in a surround sound concert of engine performance.

But for the full-on supercar experience, there is never anything more dramatic than a standing start. In that respect the 4.8-litre V10 propelled the Lexus LFA to the 62mph benchmark in just 3.7 seconds and would keep pushing to a top speed of 202mph. 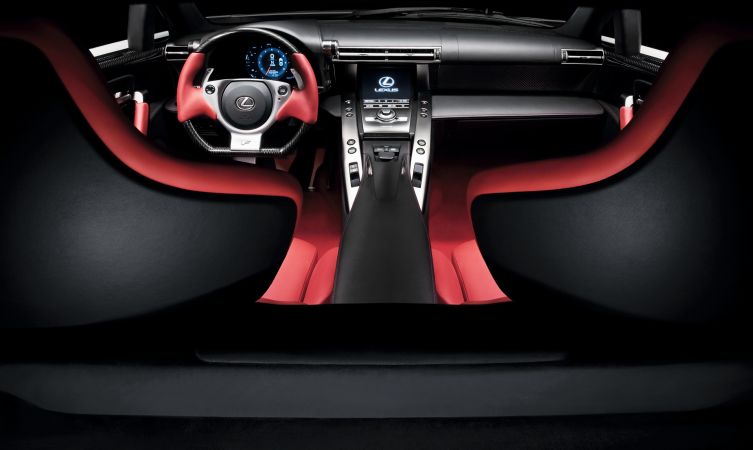 This ground-breaking V10 engine was developed in conjunction with Yamaha, a highly respected Japanese engineering specialist and long-time collaborator with Lexus’s parent company. Nevertheless, the development was controlled and managed by Lexus at each crucial stage to meet its exacting standards.

“What we needed – and what we created – was a car that moved the driver in more ways than one,” summed up Haruhiko Tanahashi, the LFA’s chief engineer. “The LFA was a car that stirred all the senses.”