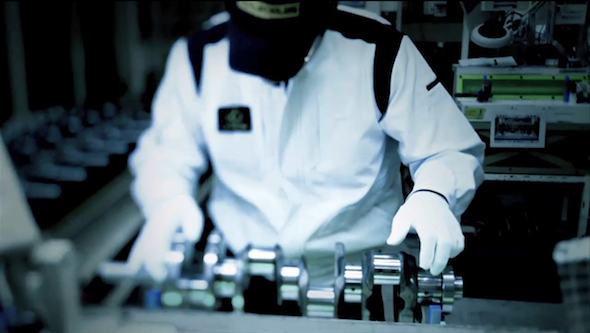 With a wide range of hybrid-powered vehicles, the LFA supercar and industry-leading quality standard, Lexus is recognised as a world-class innovator. It’s no surprise – for the past two years, its parent company Toyota has been the world’s number one investor in research and development.

As part of our focus on innovation and technology, we’ve investigated some of Lexus’s biggest engineering innovations. Read on to find out just how mind-bending some Lexus production processes really are.

Several supercars had employed carbon-fibre in their construction before the first LFA concept (which was originally conceived in aluminium) appeared in 2000. But once the decision had been made to use cutting-edge carbon-fibre reinforced plastic (CFRP) for the car’s chassis and body, what had gone before wasn’t quite sophisticated enough for the Lexus engineering team’s requirements.

Many months of work went into creating the circular Lexus carbon loom, which knits together strands of ultra-light carbon-fibre reinforced plastic into a 3D object without seams for maximum strength, rigidity and lightness.

Get a more in-depth insight into the Lexus carbon loom in this article, or for a glimpse into the process of creating the carbon loom, watch the video below.

It might seem a little counter-intuitive, but glue can be more effective way to join car parts together than welding. Spot welds link parts in one place, but a powerful adhesive can bond whole panels together. Welding remains the most common method of connecting chassis and body parts, but advanced adhesives now play their part too.

Lexus first employed adhesives in a significant way when engineering the LFA, but now that innovation is arriving in road cars like the latest IS saloon.

Glueing parts together aids structural rigidity, but this brings benefits not only in solidity, but also stability, handling quality and noise reduction.

The low heat of the lasers used means there is no distortion on the body panels, making the laser welds as accurate and effective as a traditional screw. More accuracy means less weld material, more stiffness and a more accurate construction.

A car’s engine block is its most highly-stressed part. Housing the entire combustion process, it has to withstand massive pressures, heat and constant movement.

But Lexus engineers noticed that the traditional method of pouring liquid aluminium into a cast could create bubbling, splashing and uneven setting that can lead to weak spots that can damage an engine over time. So they subverted the force of gravity by developing a construction method that sucks the aluminium into the cast vertically, meaning a perfectly even, resilient finish.

Read more about vacuum-cast aluminium in our in-depth article, or view the video below.

Find out more about our month-long focus on innovation by liking Lexus UK on Facebook.