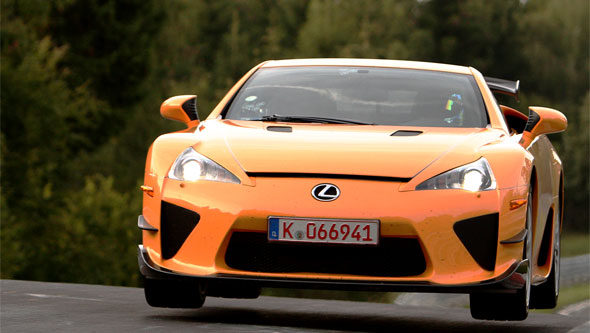 The Lexus LFA was described as ‘automotive hedonism’, ‘a work of art’ and ‘the best car in the world’ by Jeremy Clarkson but on 17 December 2012, the final curtain came down as the final example of the supercar rolled off the production line.

Just 500 examples of the hand-built 4.8-litre V10-engined supercar were made over a two-year production period, making it one of the rarest and most exotic performance cars ever.

Beginnings
The LFA project originally began way back in February 2000 when Lexus decided to create a car (then codenamed P280) that could showcase its performance credentials and develop new pioneering production techniques.

It took a full five years before LFA made its debut in concept form at the North American International Auto Show in Detroit, in 2005. Then followed years of further development, before production was officially announced in 2009.

Order books for the £336,000 machine finally opened on October 23rd, 2009 and production at the ‘LFA Works’ in Lexus’s Motomachi plant in Aichi began in December 2010.

Breakthrough design
Building the LFA led to breakthroughs such as the three-dimensional loom that weaves the ultra-strong carbon-fibre used in its chassis and bodywork, and a new vacuum-casting process used to create very light and high-quality aluminium for the engine block.

Even with the high purchase price, demand from for the 500 LFAs was great and buyers eventually had to be hand-picked by Lexus. Those who were successful were able to customise the colours, seats, interior trims and designs of their car from a staggering 30 billion possible configurations.

Europeans interested in the LFA could purchase it from just one Lexus dealer, located on Park Lane, London. Each LFA is fitted with an numbered plaque, indicating its place in the production run. The V10 engine in the car also bears the signature of the specialist who assembled it.

Influences
The LFA went on to influence the design of Lexus concept cars such as the LF-LC and the LF-CC, and some of the car’s technological innovations have since filtered down to the standard production modes. For example, the Lexus IS pays tribute to its the LFA’s instrument dials, among other advances.

Take a look at our LFA section to read more about the amazing Lexus supercar.