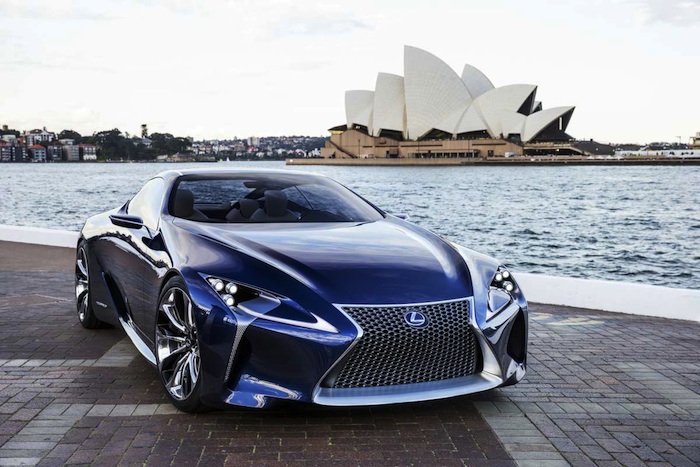 The Lexus LF-LC Blue, a development of the award-winning sports coupe concept, is set to debut at the Australian International Motor Show – and we’ve got the first pictures and video.

Car fans in Sydney will be the first to catch sight of the latest development of Lexus’s LF-LC ‘in the metal’. But as the model makes its debut at the show, we can bring you more information and pictures that give a strong signal of what lies ahead for Lexus.
In essence it’s the car that was the sensation of the Detroit motor show earlier this year, picking up the event’s top design award. For its debut in the southern hemisphere its burning red exterior has been changed for a lustrous Opal Blue, created to capture the natural base colour of the Australian gemstone. There’s a change to the cabin, too, which is finished in a smart combination of brown and white.

It’s no surprise to learn the LF-LC owes much to the LFA supercar, in particular in its use of the technology Lexus developed to enable lightweight carbon fibre and aluminium alloy parts to be joined together.

The powertrain is significant, too, a next-generation of Lexus Hybrid Drive that uses a smaller but more powerful battery unit. As a result, it’s the most powerful Lexus full hybrid we’ve yet seen, producing a mighty 500bhp from its petrol engine and electric motor.
LF-LC Blue demonstrates what the future may hold for sports cars. Lexus has been synonymous with hybrid power, superior build quality, comfort and reliability; with the LF-LC it now reinforces its design and technology credentials. The concept hints at what is to come from Lexus, which is now actively studying how it can engineer and build a vehicle like this in the future.