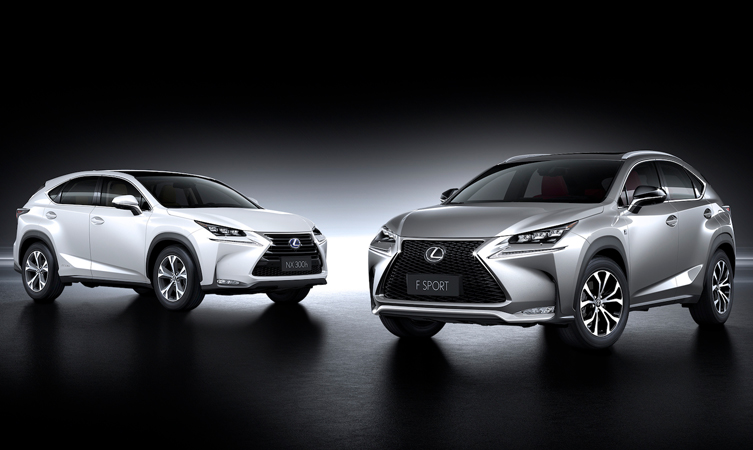 Here it is – you’re looking at the very first pictures of the all-new Lexus NX crossover.

Set for a grand unveiling at the Beijing Motor Show next week (Sunday, April 20th), the Lexus NX is a sharply styled compact premium crossover and Lexus’s first entry into the mid-size crossover/SUV market.

The NX’s striking, edgy styling and high-end technologies will mark it out as a hero model targetted toward customers new to the Lexus brand, setting new standards for future models.

Like what you see? You can register your interest in the new Lexus NX here.

Designed to look as though it is has been cast from a single piece of metal, the NX’s strong, flared wheel arches house 17 or 18-inch wheels, giving the car a crouching, muscular stance. The signature Lexus spindle grille is the central focus of the NX’s angular shape, complemented by LED headlamps and daytime running lights. The grille blends seamlessly into a sculpted bonnet, creating strongly contrasting surfacing that projects a sense of depth.

The side profile is instantly recognisable as a Lexus, accentuated by a roofline that’s set towards the rear of the vehicle to give maximum visual impact. Details include an innovative door mirror design and a world-first door handle mechanism with a concealed key barrel and integrated lighting. These features enhance the overall premium look by creating a smooth finish along the side of the car.

The rear is punctuated by Lexus’s L-shape combination lamps, fitted with seamless LED lighting. The bodywork design echoes the spindle grille treatment at the front.

Inside, Lexus aims to bring a sense of excitement to the NX’s cabin with a design more like a sports car interior, complimenting the angular bodywork.

Details include a thick-rimmed sports steering wheel and contrasting trims. At the same time, Lexus has focused on interior space and seating and has worked to ensure the driver enjoys intuitive interaction with the controls and instrumentation. The NX continues the development of Lexus’s display and operation zone concept.

Three powertrains will feature in the NX range: a highly efficient petrol-electric hybrid in the NX 300h; a Lexus-first 2.0-litre petrol turbo in the NX 200t; and a naturally aspirated petrol unit in the NX 200. Each will offer the choice of front and all-wheel drive.

UK powertrain line-up will be announced in due course.

Innovative on-board technologies include a Lexus-first wireless charging tray for portable devices; a new iteration of the Lexus Remote Touch Interface with a touch pad control; a Panoramic View Monitor; and a comprehensive multi-information display with a Lexus-first G-sensor and boost meter. The NX will also offer a head-up display, Blind Spot Monitor and Rear Cross Traffic Alert.

Takeaki Kato, NX Chief Engineer, said that Lexus has approached all phases of the model’s development from the perspective of its target customers – young, urban drivers with active lifestyles who want premium products.

NX specifications and powertrains will differ according to market; details of the range and specifications for the UK will be announced ahead of the vehicle going on sale towards the end of this year.

See our countdown to the Lexus NX reveal and look back at the LF-NX concept that precedes the new model here.