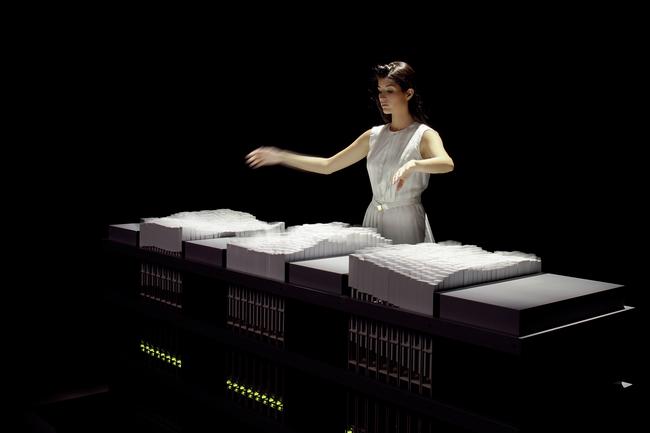 Some of the best art comes alive by experiencing it first-hand. So it is with Lexus’s three Milan installations based around the theme of ‘Amazing in Motion’.

Deeply affected by the recent Tsunami in her native Japan, New York-based artist Nao Tamura decided to make her double-height ‘Interconnection’ work for Lexus as fragile as possible – affected by the merest airflow of a human walking among it.

By suspending dozens of concave acrylic discs from the ceiling via delicately balanced and interconnecting metal see-saws, Tamura creates a giant but highly sensitive mobile display designed to express how fragile life can be – and how everything we do has an effect, for good or bad.

Walk through the light-filled installation, and the air you displace causes the discs gently bob up and down, turn and spin, throwing  shadows of varying intensity and shape on the surrounding white floor and curtains. Touch the discs directly and the effect is greater still. As Tamura says: “It is my hope you begin to notice your actions, no matter how small, can affect your surroundings on a scale that is larger than your self.” As Tamura concludes: “I want this piece to be completed by the visitors who add the motion around and among it.”

Fabio Novembre’s ‘We Dance’ is the second Lexus installation, and a visually darker affair. It’s based on ideas of light and motion via a central five- and six-sided crystal-like structure around which concentric rings rotate slowly while multi-coloured lights pick out various surfaces to suggest planets and galaxies within an otherwise space-like darkness. As Novembre enigmatically put it, “employing technology to express the movement of this dance represents the dawn of life”. It certainly created a ‘big bang’ in Milan.

The piece is made up of three horizontal banks of slim Corian blocks that move up and down via individual piston-like pins attached under the surface powered by linear electronic actuators that respond to human movement over the blocks’ surface. It works by a camera high above scanning the movement of visitors’ hands over the blocks and then interprets that motion via complicated algorithms into electronic messages which move the pins to mirror the human interaction. The effect of these quick-fire up and down movements by the blocks, which go higher or lower and faster and slower according to the proximity and speed of the hand’s movement above them – but without ever needing direct contact – creates the illusion of unseen magic at work.

Mesmerising and delightful to view for its own sake for now, MIT says the technology could in the future lead to many other types of reactive 3D shaped displays with interesting practical applications.

All in all then, three amazing expressions of motion, as unexpected as they are imaginative, which keep Lexus in good cultural company and show it to be a positive patron of new ideas that could some day spark innovation that finds its way into a Lexus vehicle of tomorrow.