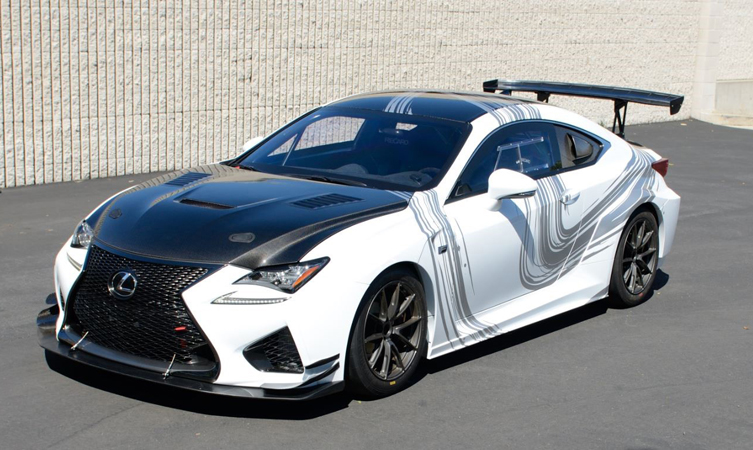 Lexus will display a new racing version of the RC F coupe during the 42nd Toyota Grand Prix of Long Beach in California, USA, this weekend.

The Lexus RC F GT Concept is a track car positioned between the road-legal Lexus RC F production car and full-blooded RC F GT3 race car. It has been developed in parallel with the production model by the Lexus Development Centre in Japan, with support from the Lexus International Motorsports Group.

The car that will be shown at Long Beach is a further development of the concept model that Justin Bell drove at the Pikes Peak International Hill Climb in 2015.

The RC F GT Concept makes extensive use of composite materials to reduce its body weight by more than 360kg compared to the production car. It retains the 5.0-litre V8 engine and eight-speed Sports Direct Shift automatic transmission, but uses modified lubrication and cooling systems and a performance exhaust. The suspension has been reinforced and allows for a greater degree of adjustment to suit the demands of competition. The Vehicle Dynamics Integrated Management software has been tweaked to expand the car’s performance envelope for track use.

Jeff Bracken, Lexus Division Vice President and General Manager in the USA, said: “The GT Concept shows the opportunities the platforms and powertrains of our F models give us. The high-performance RC F coupe and GS F saloon are geared toward enthusiast drivers and make a very strong statement about Lexus’s engineering capabilities.”

Lexus professional racers Scott Pruett and Roger Yasukawa will drive the car at Long Beach. Pruett has achieved more race victories than any current driver in North American sportscar racing, a four-time winner of the 24 Hours of Daytona and a champion in Trans Am, IMSA and Grand Am competition. Yasukawa, who cut his racing teeth in karts and formula single-seater racing in the UK, Japan and the USA, has been a performance driver for Lexus USA since the launch of the IS F in 2007.