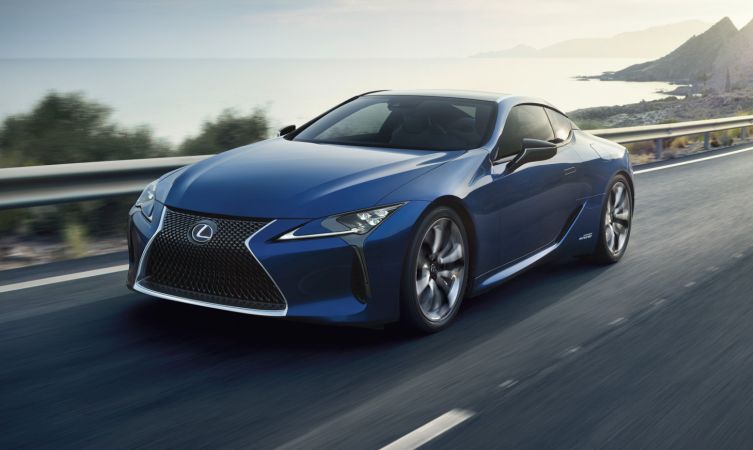 The new Lexus LC 500h luxury 2+2 coupe signals the next phase in the evolution of Lexus. It combines the dynamic luxury, ultra-rigid, inertia-tuned chassis and lightweight multi-link front suspension of the LC 500 with a brand new Multi Stage Hybrid System.

This new technology adds a new automatic transmission to the established attributes of Lexus’s full hybrid powertrain to deliver the sharpest and most refined drive, with much stronger and direct acceleration.

Lexus developed its new Multi Stage Hybrid Drive System to create a hybrid with a sporting and engaging driving experience, making a closer alignment between engine speed and throttle inputs. At the same time, the system delivers the seemingly opposing goal of achieving the best balance of power and fuel consumption.

It features all the elements of a traditional full hybrid powertrain – in this case a 3.5-litre V6 petrol engine, powerful electric motor and lithium-ion battery – together with a four-speed automatic gearbox mounted at the rear of the hybrid transmission.

The electric motor generates better acceleration feel than a conventional engine, and the introduction of physical gears allows for engine revs to be more closely matched to the driver’s use of the accelerator. The result is a much more direct connection between accelerator inputs and vehicle acceleration, with nought to 62mph brought well into the sub-five-second range.

The Multi Stage Hybrid Drive System is the first Lexus full hybrid system to provide an ‘M’ transmission mode, allowing the driver to make direct and responsive gearchanges and enjoy the most sporting and engaging drive yet from a Lexus hybrid.

Like its LC 500 sibling, Lexus has given the LC 500h classic coupe proportions and produced an exterior design that projects an avant garde elegance, remaining faithful to many of the defining features of the LF-LC concept that inspired it.

The promise of exceptional driving dynamics are witnessed in subtle yet functional aerodynamic details. Vents in the front and rear wheel arches improve high-speed stability and a rear diffuser and active rear spoiler manage airflow during performance driving.

The Lexus LC 500h will be available with a choice of standard-fit 20-inch cast or optional 20- and 21-inch forged aluminium alloy wheels.

The new Lexus LC 500h is fitted as standard with the Lexus Safety System + package of active safety technologies, designed to help prevent an accident or mitigate the consequences of an impact.

The features include a millimetre-wave radar-controlled Pre-Crash Safety system that can detect both vehicles and pedestrians in the car’s path, All-speed Adaptive Cruise Control, Lane Keep Assist and Automatic High Beam.