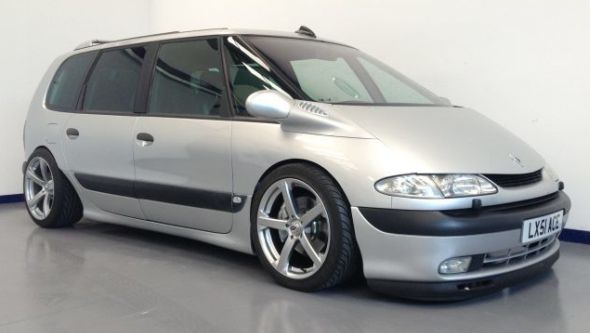 Cooks frequently use contrasing ingredients to create delicious new dishes but we rarely hear about people combining two totally different cars to make one new vehicle. So we felt it was time to break that silence…

Martin Bohen has created a crazy one-off engineering project that combines a second-generation Lexus LS 400 with a Renault Espace. Not surprisingly, it was an idea that took a while to germinate. Martin had always liked the shape of the third-generation Espace but felt it was under-powered and under-braked, that the driveline was directed through the wrong end of the car, and that it needed lowering and widening to meet its true potential.

None of these factors were easy to rectify through traditional means, so Martin embarked on a very bold and unconventional approach, taking inspiration from the popular Build-Threads website and what’s known as a ‘chassis swap’.

This process takes the body of one car and grafts it to the underpinnings and running gear from another, in this case an Lexus LS 400. The luxury saloon was found to be the perfect recipient, equipped with a 260bhp V8 engine, rear-wheel drive, effective brakes and an impeccable reputation for reliability.

Physically combining the cars through lifting, positioning, dropping and welding was a relatively simple procedure that made it appear that a lot had been achieved in the space of four hours.

Key to this was Martin’s preparation of the two vehicles, ensuring that all measurements were double- and triple-checked so that each irreversible cut was only carried out once. The Lexus was stripped to a rolling chassis, while the Espace was evacuated of components so completely that it was little more than a braced outer shell. Once the two cars had become one, Martin adventurousness continued with the engineering of a central driving position and a nitrous injection system to give the engine even more zing.

Lexus purists may baulk at the idea of scavenging an LS 400 but we should counter this by revealing that Martin’s recommissioning took place on a crash-damaged and poorly repaired example. Other than the bodywork, everything else was in fantastic condition, including the 183,000-mile engine – which speaks volumes for the quality and longevity of Lexus vehicles.

In normal circumstances, the poor repairs carried out on this Lexus would likely have curtailed its life. But thanks to Martin’s admittedly crazy input, the LS 400 – or ‘Lexspace’ as it is now known – is enjoying a new lease of life. We think this makes a far happier solution than possibly ending its days in a destruction derby.

What do you think? Why not have your say using the comment box below.