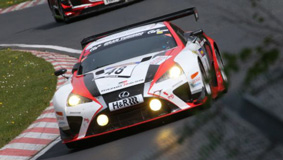 This year’s event marks the eighth 24-hour endurance challenge at the infamous Nürburgring for Lexus and its affiliated Gazoo Racing team. And as ever, the drivers and mechanics are pulling together to make it a race to remember.

Lexus announced its intention to race again in the Nürburgring 24 Hours when it displayed the pair of modified LFAs at the Tokyo Auto Salon tuning show early in the year. Final evaluation of the cars was then made through Gazoo Racing’s participation in two separate endurance races in the related VLN series during the month of April.

Gazoo Racing plans to stream coverage of the race on its official website, and we hope to bring you a full event report next week.