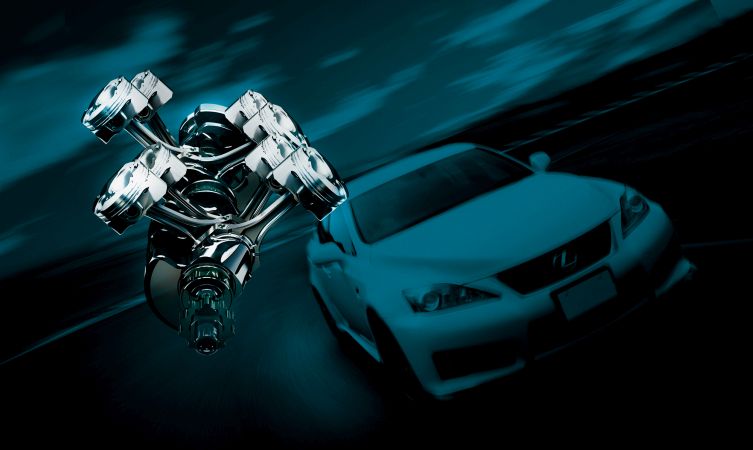 How did Lexus take the fine qualities of its existing UR family V8 engine and enhance its personality to achieve the “limitless depth of power, response and sound” expected of our first F car?

Let’s examine the engineering and performance measures behind the phenomenal high-power 5.0-litre V8 found in the Lexus IS F.

Known internally as the 2UR-GSE, the naturally aspirated 5.0-litre V8 engine installed in the Lexus IS F was co-engineered with Yamaha. It was developed as a high-performance derivative of the 32-valve, quad-camshaft UR-series engine range found in the fourth-generation LS 460 and LS 600h. Its brief was to deliver “limitless depth of power, response and sound” in addition to retaining the fuel economy, low emissions and excellent output of its siblings.

The engine was based on a die-cast aluminium cylinder block with steel liners. Its two banks of four cylinders were arranged at a 90-degree angle, while the forged crankshaft at the bottom of the V rotated around five main bearings.

But rather than secure each main bearing cap with two heat-treated steel bolts, as is the traditional practice in this sort of engine, Lexus used a four-bolt technique usually reserved for race engines (see drawing below). What’s more, these were no ordinary high-tensile fixings; they were engineered to stretch a precise amount in length as the bolt was tightened to a specific torque. Such a calculated stretch provided a consistent clamping force to secure each cap to the block.

This was an unusually robust, perfection-seeking measure. But it was the most effective means of resisting lateral vibrations generated at the crankshaft by the alternating firing of cylinders on opposite banks of the engine. It minimised potential noise and vibrations at their source, resulting in exceptionally smooth running and incredible durability.

Lexus IS F V8: coming to a head

In developing the 2UR-GSE, the engineers paid particular attention to the intake efficiency of the cylinder head at high engine revs. The UR’s highly regarded direct injection and electrically adjusted intelligent variable valve timing technologies were retained but the ports were redesigned and lightweight materials employed for the valve train.

More specifically, the intake manifold was redesigned to deliver a dual intake system, where the primary intake passage supplied sufficient flow ability to handle most of the engine’s breathing needs. But at revolutions above 3,600rpm, a secondary intake passage opened, which lowered the intake pressure loss and increased the engine’s ability to breathe. The intake ports were also machined from their original peanut-like shape into a straight-edged capsule form to improve intake efficiency. This optimised the port’s cross-section and improved the intake air flow coefficient by 11%.

With more air being drawn into the engine, it was necessary to proportionally increase valve lift. This was achieved by switching the valve material to titanium, a material that was not only stronger but 40% lighter to reduce the inertial mass. In total, the 2UR-GSE offered up to 9% greater valve lift, while lowering the valve spring load by 20% helped to reduce friction across the valve train.

The measures mentioned above, plus a 200rpm increase in rev limit, delivered a significant 28bhp increase in power, linear torque characteristics, and the feeling of “limitless depth of power” required by the brief.

To fulfil the brief for the engine to feel responsive, it was essential to minimise the time differential between the throttle being depressed and the appropriate volume of air and fuel being delivered into and consumed by the engine.

For the 2UR-GSE, a 30% shorter response time was primarily achieved by modifying the shape and volume of the intake manifold so that it could be emptied and replenished more rapidly. A free-flowing air filter ensured there were no restrictions at the entry point, while fluid analysis helped create the intake manifold plenum and the short but equal-length intake runners feeding each port.

In addition, careful tuning of the transmission and engine control systems – including the world’s fastest-reacting upshift, and rev-matching downshift – meant the whole powertrain felt instantly responsive to driver inputs.

The sound of success

The IS F’s V8 was carefully tuned to produce three distinct aural ranges. Its atmospheric bass sound centred on the exhaust note recorded in the low-speed range from idle to 3,600rpm. From this point and to 4,200rpm, coinciding with the opening of the secondary intake passage, intake roar was tuned to become the most vocal element. Towards the top end of the intake range, it was laced with a clear mechanical scream that quickly became the most prominent sound to the 6,800rpm rev limiter.

The purity of each element was carefully engineered so that possible sources of audible harshness were tuned out. This included the design of the exhaust system, the supporting position of the cam journal, the use of titanium intake valves, and an intake plenum layout that offered less resonance.

From its introduction in 2008, the venerable 2UR-GSE has gone on to power the Lexus RC F and GS F models, as well as the flagship LC 500 coupe. During that decade it has been subject to further refinements that have resulted in a headline output of 471bhp at 7,100rpm and the ability to switch between Otto and Atkinson combustion cycles to optimise efficiency at cruising speeds.

Learn more: Lexus IS F – the start of something special