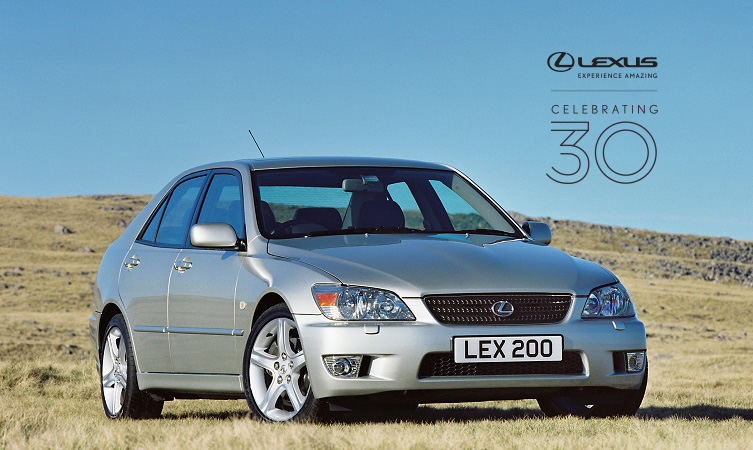 The history of the Lexus IS starts with the expansion of the Lexus range in 1998 and the arrival of the IS 200. Slotting into the compact executive market below the GS, the sporting four-door was designed to fight established players in the European market, such as the BMW 3-Series, Mercedes-Benz C-Class and Audi A4. But as you would expect from Lexus, this challenge was approached in a uniquely Japanese way in an effort to strengthen the marque’s values within the luxury car sector following its birth in 1989.

History of the Lexus IS: first generation

Development began in the mid-Nineties. Chief engineer of the project was Nobuaki Katayama, who had previously worked on the acclaimed, rear-wheel drive AE86 Toyota Corolla before moving on to the company’s Le Mans and rallying programmes.

When it was launched in Japan in 1998, the first generation IS was known as the Toyota Altezza as Lexus remained exclusively an export brand until July 2005. It was sold through a chain of dealerships called Toyota Vista Store and it won that year’s Japanese Car of The Year award.

The Lexus IS 200 arrived in the UK in 1999, and was initially available only as a 2.0-litre petrol saloon. Warmly received in the press, it was clearly a driver’s car – as you’d expect from Katayama – and to get the best performance the sweet six-cylinder needed to be revved beyond 4,500rpm. The driver could make the most of this thanks to its precise-shifting six-speed gearbox.

But it was a charismatic addition in a market sector littered with talented cars. However, it was praised for its individual design – especially inside – where the main instruments were designed to look like an upmarket chronograph watch. The sporting driver’s seat gave excellent support in corners, handling was sharp, ride well-damped, and equipment levels, on the SE especially, were high.

In 2001, the range was expanded to include a 3.0-litre version, known as the IS 300. Power rose from 158 to 220bhp, and top speed improved from 134 to 144mph. At the same time, the five-door SportCross was announced, significantly adding appeal to the range. It was a further addition to the ranks of the lifestyle/crossover estate car market.

The first generation IS remained in production until 2005 and marked a significant milestone in the development of Lexus. It proved the marque’s core values could remain intact further down the price scale.

And in the intervening years, the Lexus IS has become a popular choice with enthusiasts, who love its balanced rear-wheel drive handling and wide tuning options. In addition, the Yamaha-developed 200bhp four-cylinder RS model has proved to be a popular personal import from Japan, despite never being offered for sale officially in the UK.

History of the Lexus IS: second generation

Building upon the success of the first IS, Lexus launched its second-generation version in 2005. And it really was a case of all change, both visually and technically. The new model was longer and wider and styled to the new Lexus L-finesse design philosophy, allying it visually to the larger GS and LS models. The use of aluminium in its construction managed to keep weight gain down to an acceptable 50kg or so, which is an impressive feat considering the body was also stronger and stiffer.

The mixture of relatively compact dimensions, excellent rear-wheel drive handling, and impeccable build quality marked this out as more of the same – despite the differences. And there were many.

In a marketing sense, the model marked an important point in the development of the brand, as this generation was now sold globally under the Lexus banner. As befitting an executive saloon, the range was primarily powered by smooth, six-cylinder engines – now direct injection V6 units rather than straight sixes. In some markets an entry-level four-cylinder petrol engine was available, while this generation was also the first and last to be offered with a turbo-diesel option.

Once again, the Lexus IS majored on delivering a sporting drive, with the bulk-seller in the UK – the 2.5-litre V6 IS 250 – being a car that thrived on revs to deliver its best performance. This was no hardship, as the engine was both quiet and smooth, and the six-speed gearbox light and positive to use.

Like its predecessor, the handling and ride were both excellent: the double-wishbone suspended IS was firm and well-damped, giving the driver plenty of confidence, feeling especially surefooted at high speed.

Talking of speed, the 417bhp 5.0-litre V8-powered IS F model was added to the range in 2007. Developed by a small skunk works team led by chief engineer Yukihiko Yaguchi (see image below), the high-performance IS F was pitched directly at established mid-size super-saloons such as the BMW M3, Mercedes-Benz C63 AMG, and Audi RS4.

The IS F was genuinely race track-bred, with extensive development testing at the Fuji Speedway in Japan and on Germany’s renowned Nürburgring. As a thoroughbred, it was engineered with dedicated performance components, from its engine, transmission and suspension to its wheels and tyres.

A year later, the versatility of the IS was further explored with the unveiling of the coupe-cabriolet IS 250C, delivering a second body style to the range to coincide with the 2008 facelift. Notable features of the new thee-part retracting hard-top Lexus were that it maintained much of the saloon’s refinement when the roof was up, and that it folded itself away faster than any similar roof on the market.

Development of the second-generation Lexus IS continued throughout its life – so in 2010, the diesel-powered IS 220d was de-tuned by 25bhp to become the cleaner, more economical IS 200d. A number of styling changes were also incorporated, including the arrival of the popular F Sport model, which offered a little extra sporting style.

History of the Lexus IS: third generation

Six months ahead of its UK launch, the third-generation Lexus IS was unveiled in January 2013 at the Detroit motor show. As well as displaying more distinctive styling inside and out, Lexus engineers adopted an entirely different approach to the development of this new model. Chief engineer Junichi Furuyama explained: “Rather than develop each individual aspect in the hope they will combine to offer an engaging driving experience, we first established the kind of driving experience owners desire. With this as our initial premise, we then developed the individual performance elements to support it.”

Driving performance had always been a key quality of the Lexus IS, so this remained the prime consideration. And in so doing, the car benefitted from a dozen Lexus-first features and technical innovations, not to mention best-in-class rear space and a larger, more user-friendly boot.

The bodyshell was exceptionally rigid, being constructed from a new combination of laser screw welding, traditional spot welds, and adhesive bonding techniques, while the sophisticated multi-link suspension was similar to that in the contemporary GS model. Drivers could also use a new Drive Mode Select system to switch between three driving models to achieve their preferred balance of economy, comfort, performance and handling. F Sport models were also available, offering a specially tuned suspension set-up and unique styling features.

In terms of appearance, the third-generation IS was inspired by the LF-CC concept yet with a composite headlight cluster and a unique interpretation of the spindle grille. The mass of the cabin was concentrated towards the rear, with a distinctive character line rising from the lower body into the rear lenses. Meanwhile on the inside, the LFA-inspired cockpit offered sports car-like ergonomics and innovative electrostatic switches for the air conditioning system.

In the UK market, the new IS was initially available with two powertrain options: an IS 250 with the familiar 2.5-litre V6 petrol engine carried over from the previous generation, or a new full hybrid IS 300h, which used Lexus Hybrid Drive to combine a powerful electric motor with a newly developed 2.5-litre four-cylinder Atkinson cycle engine. The latter offered significant ownership savings, such as being clean enough to dip below the 100g/km threshold for zero annual road tax.

A couple of years later, in September 2015, a new IS 200t model with a downsized and turbocharged 2.0-litre petrol engine was introduced as a replacement for the 2.5-litre V6. It was mated to an eight-speed automatic transmission originally developed for the high-performance RC F coupe. However, as more than 90% of IS buyers continued to chose the IS 300h model, the slower-selling IS 200t was discontinued approximately two years later.

A mild revision in 2017 (see image below) further fine-tuned the IS in a number of key areas and brought it up-to-date with the latest safety technologies. The majority of models now adopted Lexus Safety System+, a set of active safety features designed to help prevent or mitigate collisions in a wide range of traffic situations.

Worldwide sales of the Lexus IS broke the one million mark in August 2016, with European sales accounting for almost 20% of that figure. Within the UK, strong and consistent sales over more than two decades means it remains our best-selling model line.