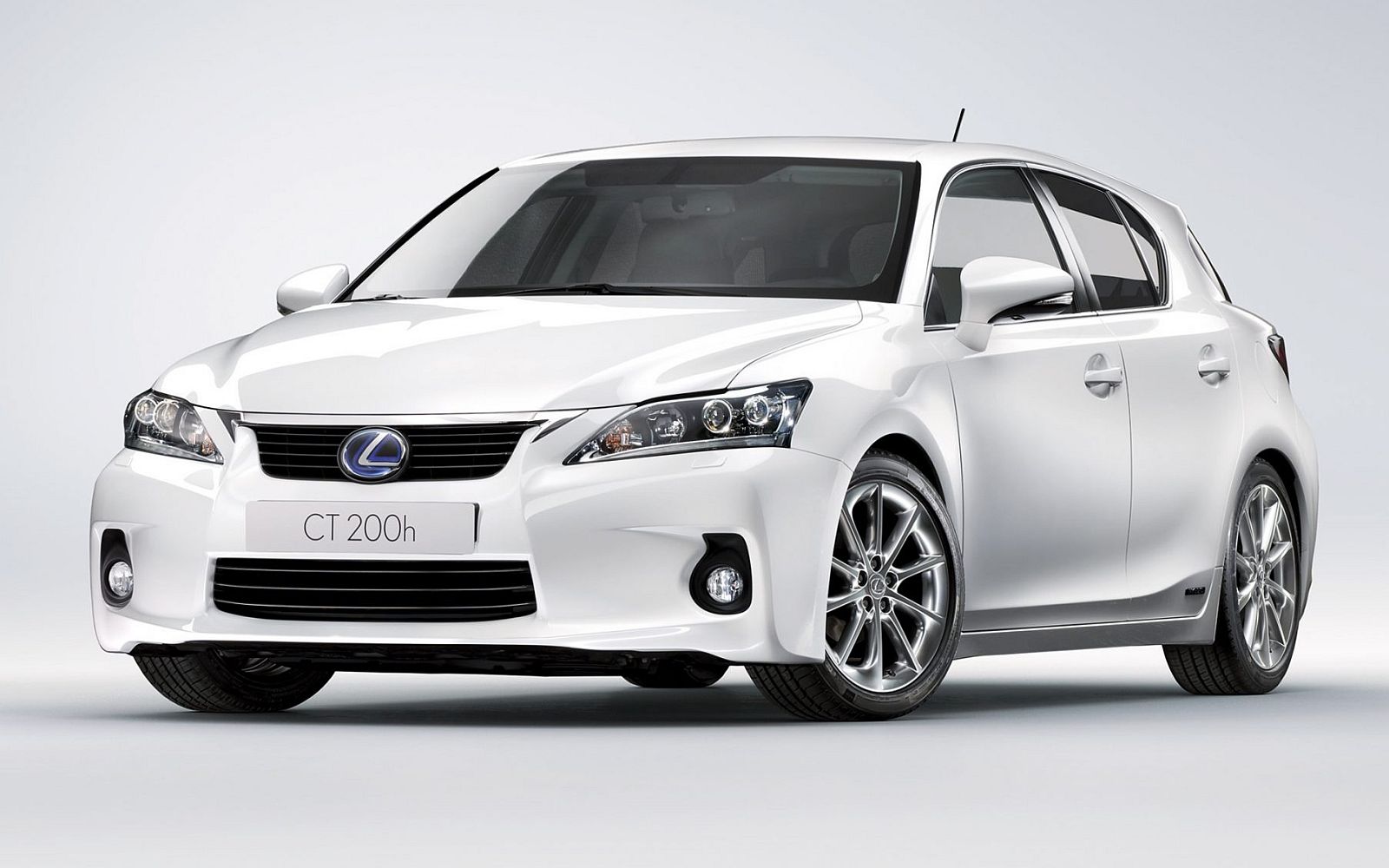 The Lexus CT was recognised as the world’s first premium compact vehicle with a full hybrid powertrain. Production commenced in late 2010 and the model continued to provide Lexus buyers with the most luxurious yet affordable entry into electrified mobility until production concluded exactly a decade later. Read on to find out more about the Lexus CT’s history.

Lexus had never made a compact, five-door hatchback before, so the revealing of the LF-Ch concept (above) at the 2009 Frankfurt motor show generated significant interest in the production car that followed a year later. Its sharp-edged look provided evidence of an exciting evolution of the L-finesse design philosophy as well as the subtle beginnings of the spindle grille arrangement.

Following the lead set by the established RX 450h, GS 450h and LS 600h models, the new Lexus CT adopted the latest Lexus Hybrid Drive technology to simultaneously raise class standards yet lower emissions and fuel consumption. And while its position as a gateway model certainly brought new customers to the brand, its distinctive, European-led design and development focus was also instrumental in attracting a more youthful audience.

The production Lexus CT 200h (above and lead image) offered an exterior styled for maximum aerodynamic efficiency. Yet in profile, the steeply raked windscreen, long, flowing roofline and slingshot window graphic combined to create an elegantly distinctive silhouette. The trailing edge of the roof continued seamlessly into an integrated spoiler, which covered a wide, wraparound rear window. Another key design feature was the pronounced step in the rear hatch that flowed directly from the shoulder line and was anchored by tail lights displaying an L-shape motif.

Inside, the asymmetrical dashboard design seen in the LF-Ch show car was retained. The interior combined superb ergonomics with extensive use of metallic finishes, soft-touch surfaces and the world’s first use of bio-plastics. The dashboard area was split into an upper display zone complete with an eight-inch multi-display screen, while the lower operation zone was dedicated to housing the controls.

The driving position was set low, which prompted the engineering of a new intake design to lower the bonnet profile while maintaining good visibility and pedestrian impact performance. That sporty nature was further underlined with mood-matching Eco, Normal and Sport selectable driving modes. Sport mode would not only enhance the vehicle’s dynamics but alter the driving atmosphere by changing the lighting within the instrument binnacle from blue to red and switching the hybrid indicator into a rev counter.

Underlying this dynamic nature was a new platform with a dedicated double wishbone and trailing arm rear suspension system. Innovative engineering was also seen in the use of lateral performance dampers front and rear, yet another world-first for a volume production car. Keeping the wheels 2,600mm apart offered spacious accommodation for front and rear passengers, while positioning the rear shock absorbers and springs separately minimised load space intrusion and created a 345-litre luggage area.

The 134bhp Lexus Hybrid Drive system in the Lexus CT combined a 1.8-litre, four-cylinder VVT-i petrol engine with a powerful electric motor that was capable of running the car in EV mode for up to 1.5 miles at speeds up to 28mph. All versions of the car produced less than 100g/km of CO2 and delivered well over 60mpg in combined cycle driving.

The Lexus CT arrived in most world markets in early 2011, with Lexus Europe announcing its arrival with a ‘Quiet Revolution’ advertising campaign starring Kylie Minogue. In stark contrast, Lexus USA donated a number of pre-production cars to well-known aftermarket tuners for display at the annual SEMA show, while Lexus Japan engineers demonstrated the new car’s sporting prowess by taking part in a six-hour endurance race at Germany’s Nürburgring circuit.

In the UK, the Lexus CT was initially available in three model grades: SE-I, SE-L and SE-L Premier. Almost immediately, the model accounted for more than 70% of all Lexus hybrid sales and more than half the total European order bank. But perhaps most impressively, two-thirds of Lexus CT sales were to customers new to the brand. The January 2012 arrival of an F Sport grade only added to this popularity, with its sporting theme reflected in new body styling elements such as a larger rear spoiler, flared side skirts, mesh grille and revised aero bumpers.

A few months later, the Advance grade (below) was inserted between SE and Luxury, standardising such luxuries as satellite navigation, reversing camera, rain-sensing wipers and cruise control. From a historical perspective, the Advance grade was notable for introducing Lexus owners to its new Tahara upholstery: a man-made alternative to leather that weighed half as much, generated 65% less CO2 to produce and contained no volatile organic compounds.

The first minor change in Lexus CT history was unveiled to the public in China at the end of 2013 but arrived in Europe in March 2014 with a price realignment which meant that some models were actually £1,500 cheaper than before. Lexus had applied a total of 94 separate changes, which for a mid-life programme represented a huge commitment to the model.

Under the surface, the revised car was now put together with advanced laser welding and body adhesion techniques rather than exclusively spot-welds. Its refreshed exterior design included full adoption of the now-signature spindle grille, along with new alloy wheels, a new-look rear bumper with stronger horizontal sculpting and a revised range of colours.

Meanwhile, F Sport models were given a stronger individual identity within the line-up thanks to features such as a dedicated wheel design, an exclusive colour option and cut-outs in the rear spoiler to increase downforce.

Inside, changes were made to improve comfort, equipment levels and overall quality. Among these were a new 370mm steering wheel (the same as in the recently introduced IS saloon) and the application of a second-generation Remote Touch Interface controller, while audio quality was enhanced with the world-first introduction of bamboo-based material for the speaker diaphragms.

Further revisions to the hybrid system delivered a more linear match between engine revs and vehicle speed, which in turn lowered the CO2 output of the modestly wheeled entry-level model to just 82g/km.

In January 2015, a new Advance Plus grade (above) was introduced. As the name suggested, this model took the existing specification level associated with Advance but augmented it with Lexus’s first-ever two-tone paint option. This added a Velvet Black roof to cars painted in Fuji Red, Ultra Blue, Sonic White or Sonic Titanium. Later that year, a new Sport grade (below) was also added, which enhanced the two-tone treatment of Advance Plus with an all-black spindle grille, black alloys, black door mirror covers and black upholstery.

This high-value Sport model proved popular with customers and a re-profiled version of this grade was carried over into a revised 2017 model year range. At this point the Lexus CT line-up became the broadest in its UK history, with a six-level hierarchy consisting of S, Executive Edition, Sport, Advance, Luxury, F Sport and Premier grades. Among these, the two-tone paint finish remained exclusive to Sport models.

By the arrival of this second minor makeover, more than 300,000 CTs had been sold globally, of which a quarter of these were in Europe and more than 27,000 in the UK. So for the next chapter in Lexus CT history, the car was updated was to build on the model’s strengths while refreshing and modernising its appearance.

Greater frontal impact was generated by reversing the positions of the headlights and daytime running lights, meaning that the arrowhead-shaped DRLs now sat at the top and flowed directly into the character lines that extended down the side of the car. A new mesh pattern filled the grille and the integrated bumper that divided the upper and lower grille sections was removed. Meanwhile at the rear, new all-LED light units featured bold lens sculpting to create a visually widening L-shape.

Inside, the optional Lexus Premium Navigation brought a 10.3-inch screen into the recess at the top of the dashboard, while it was also possible to choose from a wider variety of colours and materials for the upholstery. Similarly, F Sport models could now be specified in two distinctive new colours: Solar Flare and Azure Blue. Safety was also a prime consideration, with the introduction of the advanced Lexus Safety System+ to the range.

The grade structure was simplified to four levels — SE, Luxury, F Sport and Premier — though the specification of SE and F Sport models could be boosted with additional equipment packs.

However, for the 2019 model year, the CT grade structure was altered once again to bring it into line with that of the newly launched UX compact SUV. The entry model was now simply known as the CT, F Sport was relocated as the middle grade, and Takumi occupied the top of the range. Separate option packs could enhance the specification levels of CT and F Sport models.

The Lexus CT was officially removed from sale in the UK at the end of 2020, though the last remaining stock was sold through the early part of 2021. During its ten years of availability the CT accumulated 33,966 sales in the UK and won a cabinet full of reliability and satisfaction awards. It was our best-selling model from 2011 to 2015 and was only bettered by the NX from 2016 to 2018. Even as the compact UX began to lead the Lexus sales charts, the CT proved to be a strong seller until the very end.