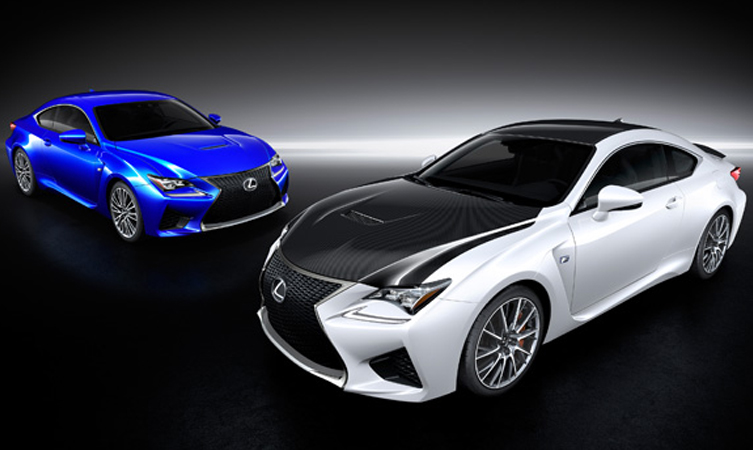 The highly-anticipated Lexus RC F, the most powerful production V8 coupe Lexus has ever produced, is ready to move from motor show star to road-going sensation as Lexus prepares for its UK launch before the end of the year. Marking the start of a new era of genuine Lexus high-performance engineering, Lexus is pleased to announce the RC F’s equipment specifications and pricing, with order books now open and the first cars expected to be with customers from late January next year.

On looks alone, the RC F has already made a huge impact following its world reveal at the Detroit motor show in January. Now it’s ready to make good on the promise of its attention-grabbing, contemporary Lexus styling with thoroughbred performance, handling and advanced new technologies. Being a Lexus, it is also equipped and finished to the highest quality standards.

UK model range
RC F will be launched in the UK in two versions: RC F, priced at £59,995 on-the-road (OTR), and RC F Carbon at £67,995 OTR. Both are equipped with the same V8 engine, a new 5.0-litre, 32-valve V8 specifically developed for the RC F. With more than 450hp and 520Nm of torque, it is the most powerful V8 that Lexus has built for use in a production car, and is paired with a specially-calibrated eight-speed Sports Direct Shift transmission.

The RC F Carbon benefits from additional performance features in the form of a torque-vectoring differential and a CFRP (carbon fibre-reinforced plastic) roof, bonnet and rear spoiler. It marks a world-first in the use of a torque-vectoring differential in a front engine/rear-wheel drive car, giving the driver the choice of with three operating modes to optimise traction and vehicle control in different scenarios from everyday driving to track performance.

Using CFRP for major elements of the RC F Carbon’s bodywork is not a cosmetic exercise, but strategic use of a strong and lightweight composite material Lexus originally developed for its LFA supercar.

Performance aside, the RC F benefits from the same comprehensive array of comfort, safety and advanced technology features that is characteristic of today’s Lexus range.

Inside the RC F, the cabin features high-grade leather upholstery and electrically adjustable front seats with heating and ventilation functions, with Lexus ‘F’-themed details throughout the interior, including the steering wheel, pedals, trim and seat design.

Principal options for the RC F include Adaptive Cruise Control (ACC) with a Pre-Crash Safety (PCS) system and a Mark Levinson Surround Sound system. The torque-vectoring differential featured on the RC F Carbon can also be specified.

The RC F Carbon is distinguished by a dedicated 19-inch forged alloy wheel design and Alcantara upholstery. It comes with the Mark Levinson Surround Sound system as standard and, like the RC F, can be optionally specified with the ACC/PCS combination.

A complete specification list for both RC F models is shown below, but to find out more about the RC F coupe and to register your interest, head over to the designated section of the Lexus website.