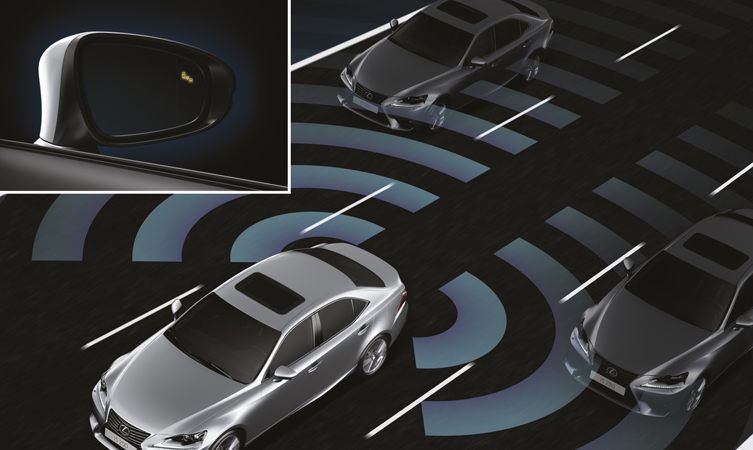 Lexus develops its vehicles and technology under the umbrella of Toyota Motor Corporation’s (TMC) ‘Integrated Safety Management Concept’, one part of a three-pronged approach which involves continual improvement in vehicle safety as well as initiatives to improve driver and pedestrian awareness and to create a safe traffic environment.

TMC’s eventual aim is to realise a society where traffic accidents are a thing of the past, which is why decades of research into safety technologies have resulted in Lexus cars receiving consistently high results in Euro NCAP crash safety tests, with the CT and IS achieving the maximum five-star award.

In this post, we take a look at Lexus’ various monitoring systems that keep a close eye on the surroundings when you are parking and driving:

Parking sensors
To ease parking the vehicle, Lexus equips all its models with ultrasonic parking sensors that use sound waves to detect obstacles, indicating the proximity of the obstacle by means of a beeping alarm. This system can help to prevent low-speed impacts when parking, avoiding potentially costly repairs.
All Lexus cars (except CT 200h ‘S’ models) can be bought with parking sensors, fitted as part of the standard equipment in the majority of cases. Dependent on specification, sensors may be fitted to the rear or both front and rear.

Rear-View Camera
As well as parking sensors, Lexus also utilises Toyota Motor Corporation-developed rear-view cameras to a number of models. The view from the camera is displayed on the in-dash display, overlaid with guidance lines that indicate distance. This system aids parking and prevents collisions with unseen objects behind the vehicle.
All Lexus vehicles can be specified with a rear-view camera.

Rear Cross Traffic Alert (RCTA)
Using the same sensors as Blind Spot Monitor, the Rear Cross Traffic Alert (RCTA) system warns the driver of unseen vehicles approaching from either side that aren’t visible through the rear screen or mirrors, such as when reversing out of a parking space. If a vehicle is detected, RCTA sounds a warning and flashes the warning lights in the door mirrors.
Like Blind Spot Monitor, the RCTA system is available on Premier grade IS models, the Lexus GS, RX 450h and new Lexus NX luxury crossover.

Adaptive Cruise Control (ACC)
Adaptive Cruise Control (ACC) adds an extra layer of safety to conventional cruise control, the system by which a car drives at a constant speed set by the driver. First used in 1997, Lexus added a radar-monitoring system to the cruise control system to create Adaptive Cruise Control which can alter your car’s speed based on the speed of vehicles travelling ahead. When a slower-moving vehicle is detected, ACC automatically reduces your car’s speed (activating the brakes if necessary) to maintain a safe distance between the two vehicles. If the vehicle in front turns off or speeds up, then ACC will accelerate your car up to its previous cruising speed.

Adaptive Cruise Control is available on most Lexus models, either fitted as standard or as an optional upgrade.

Lane Departure Warning (LDW)
Lane Departure Warning (LDW) as been part of Lexus’ line up of safety technologies since 2002. The system uses two cameras mounted behind the rear-view mirror to continually monitor vehicle position in relation to road lane markings. If it detects that the car is drifting out of its lane, LDW triggers an audible and visual warning for the driver to take corrective action.

Lane Departure Warning is fitted as an optional upgrade on IS, GS and LS models.

Lane Keep Assist (LKA)
Lane Keep Assist (LKA) was introduced in 2004 as an extension of the Lane Departure Warning system. The LKA system activates if it detects that the driver isn’t responding to the lane departure warnings, and will actually apply corrective steering without driver input to maintain a safe course.

Like Lane Departure Warning, Lane Keep Assist is an optional upgrade on IS, GS and LS models.

To learn more about other Lexus safety technologies, see these related posts: