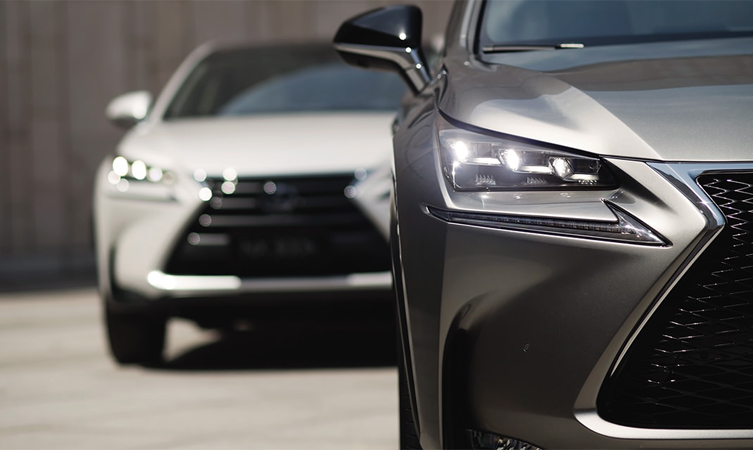 Last year Lexus unveiled the LF-NX, a distinctive, compact crossover concept that hinted at the brand’s potential drive into the crossover SUV market. Its profile was aggressive and its motifs were bold and muscular. Yet it was also refined and athletic. One designer referred to it as “a lightweight fighter” – the kind of vehicle that combines strength and power with agility and finesse.

Concept cars are often one-off affairs – experimental and progressive, indicative of a marque’s technical prowess. Relatively few conceptual design elements ever make it onto a vehicle produced for the mass market. But Lexus has proved time and again that its LF series of concepts can be directly linked to future production models. And none more so than the production-ready successor to the LF-NX.

Admittedly, the new Lexus NX has a more measured look than its predecessor. The headlights and mirrors have been enlarged for practical reasons but otherwise the evolution has been linear and smooth. Sophistication has been retained, as have many of the SUV’s original design traits, such as the sculpted front end, the bulging rear arches and those powerfully protruding arch flares.

One version, the upcoming NX 200t, is equipped with the brand’s first turbo engine, which comes with a water-cooled cylinder head and integrated exhaust manifold. Usually, important technological advances like this are first applied to more established models such as the LS, says chief engineer Takeaki Kato. But he made sure the NX broke that rule.

“We knew that a newly developed turbo engine would be hard to include in a ‘rookie’ model like the NX,” says Kato. “But it was extremely important that our very first compact SUV would be equipped with an engineering edge over its rivals to make sure it gets noticed in this increasingly competitive market.”

Against the odds, Kato’s wish was granted; except he didn’t stop there. He also assembled a team dedicated to improving handling and the development of a new transmission. It was important to the team that the NX drove more like a luxury saloon than a traditional SUV.

“While developing the engine we also began work on a new six-speed automatic transmission for the NX 200t. By incorporating a new on-demand drive control system to instantly calculate the amount of engine torque the vehicle needs at any given time, we managed to extract the most out of the turbo engine.”

Leading the charge in the UK, however, is the NX 300h, a hybrid model that comes with a damping control system engineered to increase ride comfort. An F Sport variant is also available for those who seek responsive steering and a more dynamic driving experience.

Setting performance aside, the Lexus NX is equipped with a variety of features designed to satisfy even the most particular owners. There is the wireless charging tray, located in the centre console, that lets you charge your smartphone while driving. And there is the panoramic view monitor, which gives the driver a full 360-degree view of the car’s surroundings. Cameras are installed in the front and rear of the body, as well as on its left and right sides, and the images they capture are seamlessly integrated into an overhead view displayed on the navigation monitor to make it easier to enter and leave even the tiniest parking spaces.

The NX was built with the user in mind, something the development team is very proud of. The car is bold and smart, meant for city dwellers who are always on the go. Kato said that he had analysed customer needs so thoroughly that every aspect of the car had been designed not just to fulfil their wishes, but surpass them.