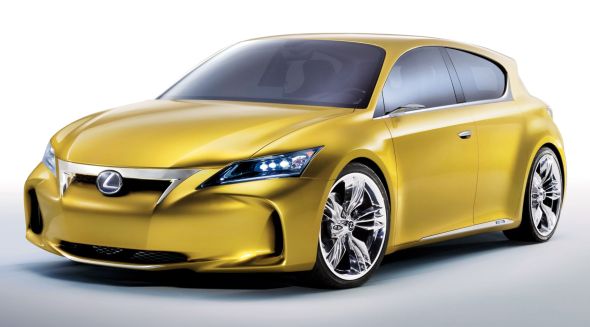 The new Lexus LF-NX concept car stunned enthusiasts around the world – even before its official debut at the 2013 Frankfurt Motor Show.

But while the new design model’s sharp looks have won plenty of praise, many are already wondering whether this concept is simply the product of a designer’s dream, or if its arresting design features will directly translate into production reality.

While we cannot comment on that just yet, what we can say is this – historically, the Lexus Future (abbreviated to LF) series of concept cars have signalled the arrival of numerous new design features and sometimes given us barely disguised representations of cars ready for imminent production.

Precisely how much of the LF-NX concept will make production is yet to be revealed, so we thought it would be interesting to review previous LF-series concept cars and see how closely they reflected the vehicles we see on our roads today.

Interestingly, major concept vehicles from Lexus initially bore the nomenclature ‘HP’. However, the High Performance Crossover, or HP-X, of 2003 was swiftly renamed LF-X on later show reveals – in line with the then new Lexus design philosophy, L-Finesse.

The car was unveiled to introduce a new, adaptable design direction for all future Lexus models, and in this specific concept to communicate the strength, speed and agility of the LF-X’s all-wheel drive chassis within a dynamic profile. Indeed, it was this profile and sweeping window line that went on to inspire the form of the second-generation Lexus RX.

The LF-S, or Lexus Future Sedan, was revealed at the 2003 Tokyo Motor Show ahead of the Lexus brand being officially launched in Japan. Notable design cues such as the slingshot dashboard design, fastback-style profile and distinctive rear boot lid were transferred into the third-generation Lexus GS, while the car’s hybrid all-wheel drive transmission hinted at the technology that would later appear in the RX 400h.

The Lexus Future Coupe, or LF-C, appeared at the 2004 New York Auto Show and featured a retractable hardtop with a four-position glass roof. This ingenious setup gave the car multi-configurable options: coupe, convertible, targa and speedster. The frontal treatment of the LF-C inspired that seen in the production second-generation Lexus IS, not to mention the later production of a convertible version of this model.

The LF-Sh appeared at the 2005 Tokyo Motor Show shortly after the official debut of Lexus in Japan. More than any other LF-series concept car to date, the Lexus Future Sedan hybrid was production ready in all but a few details. Only items such as the style of the exhaust outlets integrated into the bumper and LED headlamps did not appear in the first versions of the production car. The LF-Sh’s dimensions were even identical to the fourth-generation LS saloon it would go on to become.

There have been three versions of the exotic Lexus Future Advance, or LF-A, concept car, the first of which appeared at the 2005 North American International Auto Show. The first version debuted both the basic appearance and incredible 4.8-litre V10 powerplant of this prospective halo car for the Lexus brand. The second debuted at the same show two years later, fleshing-out the concept with a fully furnished interior, a switch from aluminium to carbon fibre for the main body structure, and a retractable rear wing. The third iteration of 2008 was once again revealed at NAIAS but this time as a roadster model, though this version never made it into production. The road-going car dropped the concept’s name hyphenation to become simply the Lexus LFA.

Based on past experience, there was nothing particularly new about the debut of a Lexus crossover concept with hybrid technology, especially as the second-generation Lexus RX 400h was already in full production. But with the benefit of hindsight, this LF-Xh, or Lexus Future Crossover hybrid, showed clear evidence of the future appearance of the third-generation RX model. Displayed at the 2007 Tokyo Motor Show, it pre-dated the forthcoming RX 450h by almost two years.

Two years before its progression into the production Lexus CT 200h in 2011, the LF-Ch, or Lexus Future Compact hybrid, concept of 2009 was designed to explore the possibilities of a premium hybrid with the competitive C-segment.

After introducing L-finesse design language to the world through the production Lexus GS of 2006, the Lexus LF-Ch spearheaded a more aggressive and three-dimensional approach, featuring deeply inset headlamps, an arched roofline, prominent rear spoiler and the subtle beginnings of the distinctive ‘spindle’ grille.

For this Lexus Future Grand-touring hybrid concept, the designers studied characteristics that are often considered contradictory and difficult to execute together, such as style and functionality.

The Lexus LF-Gh debuted at the 2011 New York International Auto Show and was the first Lexus concept to display the new, emboldened spindle grille design – a feature that is both visual identifier and essential aerodynamic aid. Inside, modern and classic design themes combine, especially in the use of an analogue clock as a focal point in the dashboard. Lexus revealed that many details from this concept would make production in one way or another, though based on the overall exterior and its rear-wheel drive hybrid platform many showgoers in 2011 felt that it offered an indication of the appearance of the future (subsequently current) Lexus GS.

Designed at Lexus’s Calty Design Research studios in California, the 2012 LF-LC, or Lexus Future Luxury Coupe, was conceived around the idea of ‘fluid precision’, manifesting itself in what the designers have called ‘Avant-garde beauty’. Its striking looks and bold interpretation of L-finesse philosophy have hinted at forthcoming design cues in a new wave of Lexus models, not to mention its inclusion of advanced materials and technologies.

These include extensive use of lightweight carbon fibre and the next-generation full hybrid drivetrain, which at 500bhp is the most powerful of any Lexus hybrid. It remains to be seen whether the LF-LC will eventually manifest itself as the next-generation Lexus SC, but details such as its unique arrowhead running lights, one-piece spindle grille and sharply tapering rear lenses have already appeared in the current Lexus IS.

One thing is for sure – with these latest expressions of L-finesse design language, the end result is sure to be both visually arresting and immediately identifiable as coming from Lexus.