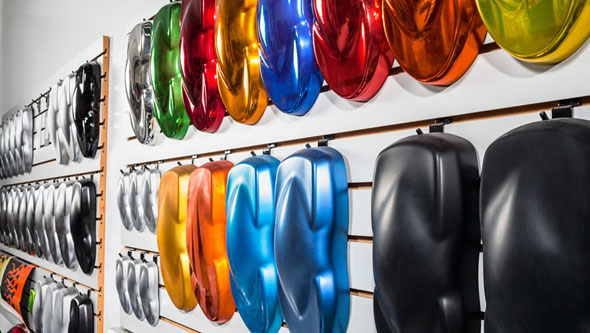 Remember the curvaceous Lexus LF-LC concept shown at Detroit in January? It was born and created at CALTY Design Research, the Californian outpost of Lexus’s global design operation.

Some of Lexus’s most exciting cars have been designed in the brand’s advanced research studio in California, so we sent correspondent Guy Bird to the HQ to find out more.

The Newport Beach-based studio has been a hotbed of creativity for the brand for almost as long as Lexus has existed. Its team masterminded the sleek SC400 production coupe, the 2004 LFC hard-top convertible concept and the 2009 LF-Ch compact – which led to the CT200h production car.

On our visit, a full-sized model of the mustard metallic-coloured LF-Ch concept still takes pride of place in the facility’s reception area alongside a wall documenting all the other great designs CALTY has made since its inception back in 1973.

Kevin Hunter, president of CALTY since 2007, has seen much of the studio’s progress first-hand joining in 1982 after graduating from college, and acts as our guide through the parts of the studio we’re allowed to see (many areas are out of bounds due to confidential design work being carried out).

“We’re not just a styling studio,” Hunter explains. “We do a lot of research too and we’re proud of it, that’s why it’s still part of the studio’s full title.” Beyond advanced design and research undertaken at Newport Beach, CALTY now has a separate US facility in Ann Arbor, Michigan concentrating on production design, but Hunter says the Californian outpost also works on production car colour and trim.

This discipline is no doubt helped by its fascinating ‘colour and trim history wall’ adorning one corridor, in which every decade since the 1950s has been painstakingly documented through the juxtaposition of images from popular culture with the most iconic cars, colours and materials of the day.

Further along the corridor reveals a series of life class sculptures made by the car designers to provide fresh subject inspiration and no doubt helpful when sculpting the precisely curved forms of concepts like the LF-LC – a clay scale model of which still sits in the modelling room among sketches of its development.

Entering a separate darkened room akin to a small cinema our retinas are bombarded by huge and highly realistic 3D images of the same car on a ‘powerwall’, while a technician at the room’s computer controls remotely manipulates the car’s colour, changes the background location it’s superimposed upon, then the time of day – to study how the car looks with its lights on – and then flips to a blueprint-style cross-section so the car’s under-the-skin parts can be viewed clearly.

It’s all incredibly high-tech, breathtaking and part of the process of making fabulously forward-facing cars.

Finally, almost before I’ve had time to draw breath, I am ushered through a secluded open space – where the designers can evaluate full-scale models in natural daylight – this is where the decisions on the future direction of Lexus design are made.

Sadly, there are no top secret models on display today, so it’s back to the reception area to leave.

Hunter smiles and reassures in his conclusion: “We’re moving the needle on design right now. The revolution is starting on the stuff coming out that you haven’t seen yet. Design has to be the beacon of light that leads the way. If you have a beautiful sketch, both designers and engineers get behind the project. If it’s boring, no-one cares.”

Guy Bird is a freelance writer and editor specialising in cars and design for the likes of CAR magazine, The Daily Express, Wallpaper* and Car Design News. He attends the world’s auto shows from Paris to Tokyo and has road-tested the vast majority of vehicles available in the UK over the last 18 years. www.guybird.com