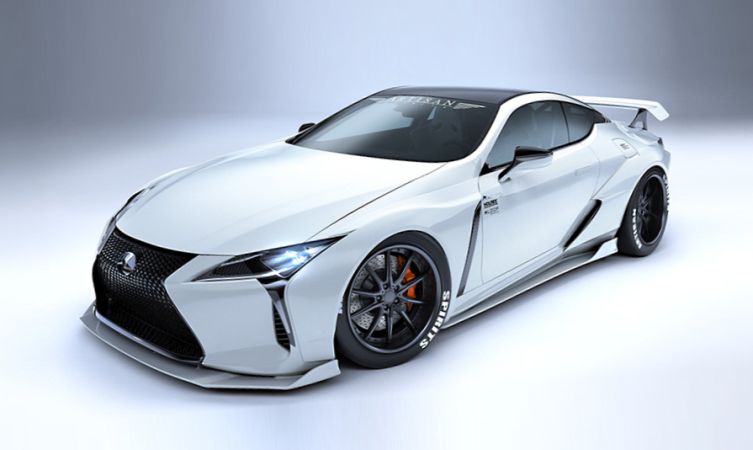 Are you the sort of person who cannot resist adding a dash of hot sauce to every meal? Then you will probably understand why some people have an overwhelming desire to personalise a vehicle to suit their taste, even if the vehicle in question already offers an award-winning design.

Is it possible to add extra ‘heat’ to the already sizzling looks of the LC?

Our recent review of modified UX, ES and RC models encouraged us to research aftermarket styling options within the upper echelons of the Lexus range. We wondered: is it possible to add extra ‘heat’ to the already sizzling looks of our flagship luxury coupe?

The answer to that question is subjective, of course. So we’ll let each reader decide whether the four examples below improve upon, or detract from, the appearance of the svelte Lexus LC. 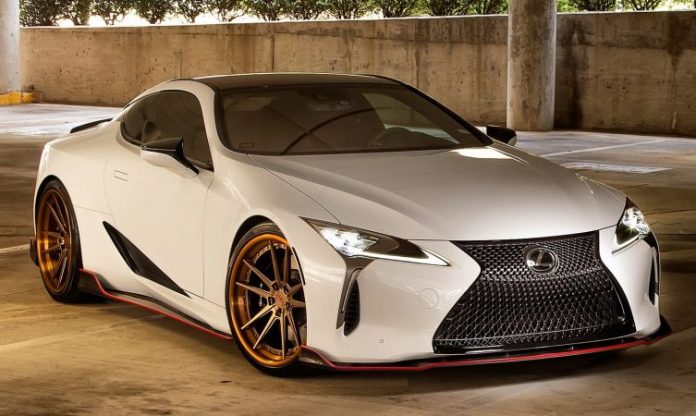 Exhibit ‘A’ is a relatively restrained affair by Floridian manufacturer Strasse Wheels. Centre stage is a set of the company’s SV1 Deep Concave FS forged, three-piece alloys painted in contrasting bronze finishes – gloss around the rim and satin across the centre piece. 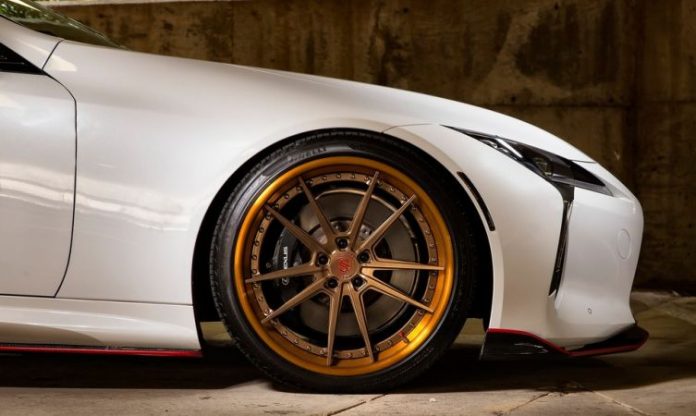 The staggered wheel sizes have been increased to 22 inches in diameter and the tyre profiles slimmed to retain the same circumference as the original rolling stock. Meanwhile, the offsets have been carefully calculated to push the wheels to the extremity of the standard arches without fouling the arc of the lip. 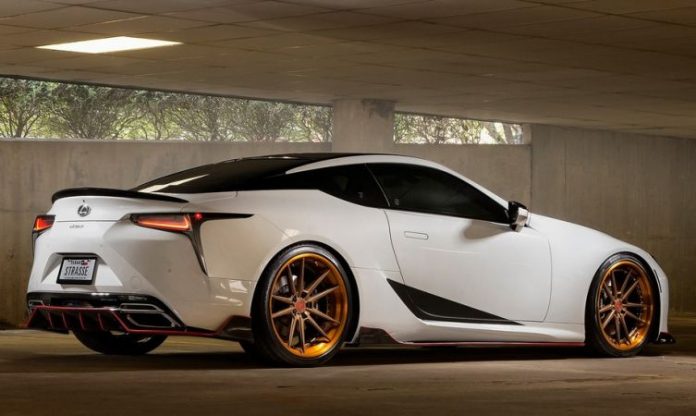 The final flourish is provided by a carbon fibre under spoiler package and rear diffuser from Artisan Spirits, although the owner has further tweaked this by adding a red key line around the leading edge. 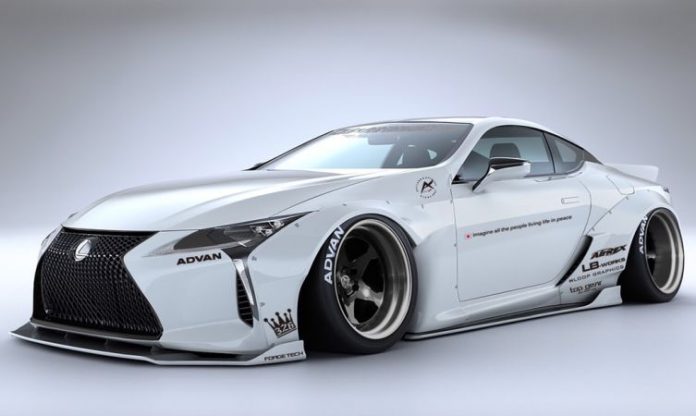 Bolt-on arches used to be a rudimentary method of increasing the wheel track of a race car. But Japanese styling house Liberty Walk has refined the concept of over-fenders into an art form, applied it exclusively to premium machines, and in the process endowed wide-body conversions with immense street appeal. 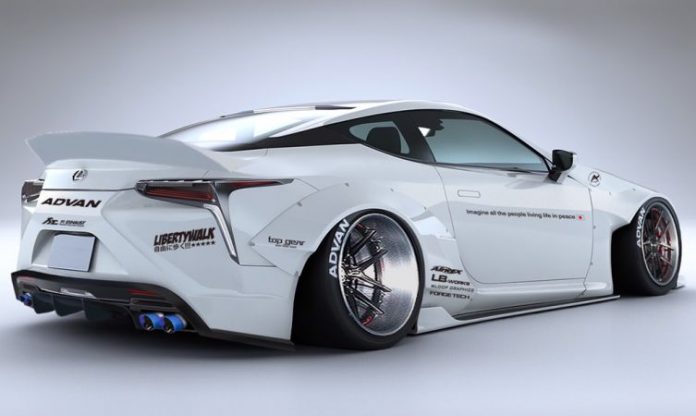 This Liberty Walk conversion centres around the four arch extensions, each perfectly tailored to sit flush to the surrounding bodywork and exaggerate the original LC aesthetic.

In this instance the over-fenders are visually linked with the same Artisan Spirits under spoiler and rear diffuser package as the Strasse project above.

The predicament of how to fill the arches is left to the customer. However, the alloys displayed here measure a whopping 10×20 inches up front and 12×20 inches at the back, with aggressive offsets to fill the blistered wheel wells. 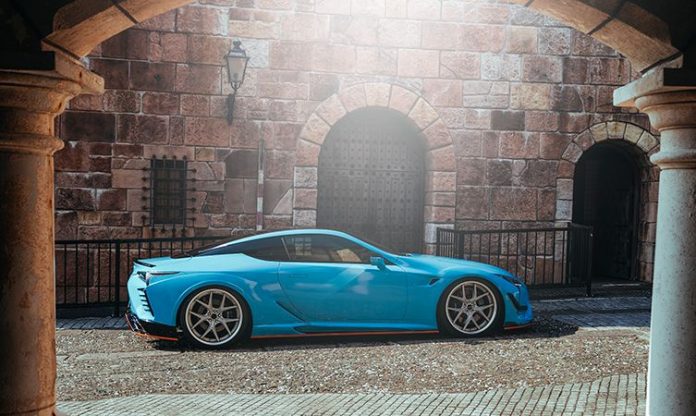 Japanese styling house Wald International has created a Sports Line makeover for the LC that comprehensively modifies each elevation. 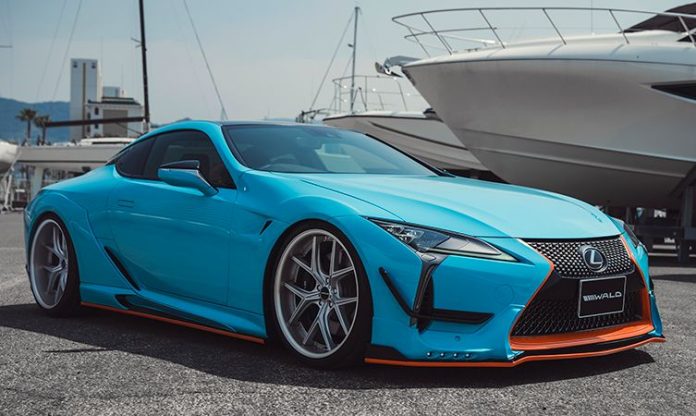 Although the most complicated from a constructional perspective, Wald’s design manages to balance impact with subtlety. By carefully adopting the original swage lines, the conversion offers a sense of homogeneity. For instance, look at how the crease below the window line is carried through into the front wing vent. 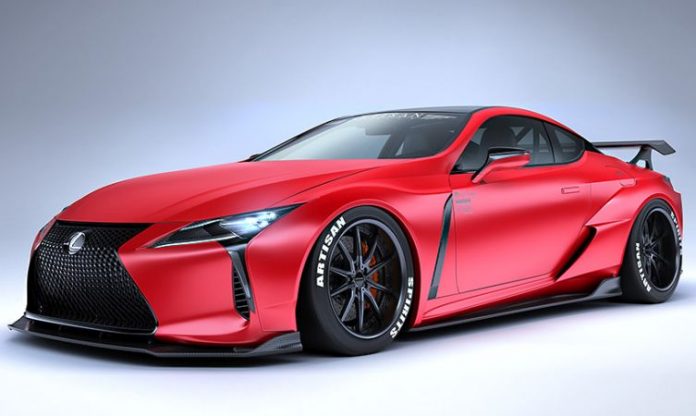 After more than 20 years of experience in the aftermarket industry, Artisan Spirits was the first company to recognise the styling potential of the Lexus LC and display the world’s first modified example.

The company’s subtle Sports Line package has been installed on two of the above examples and makes its third appearance here. But this time it is joined by Artisan’s fantastic Black Label GT conversion – its 20th anniversary present to the aftermarket. 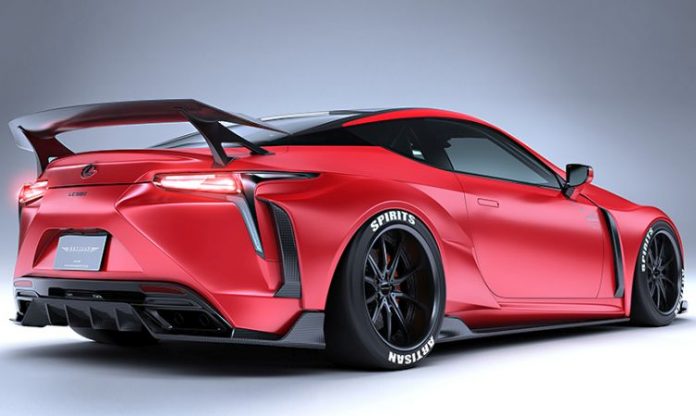 Looking like a road-legal GT racing car, this four-piece wide-body conversion is available in either fibreglass or carbon fibre.

But the finishing touch has to be that high-level carbon fibre rear spoiler produced in cooperation with wing specialist Voltex Racing. We don’t want to sway your opinion, of course, but we think this looks incredible!