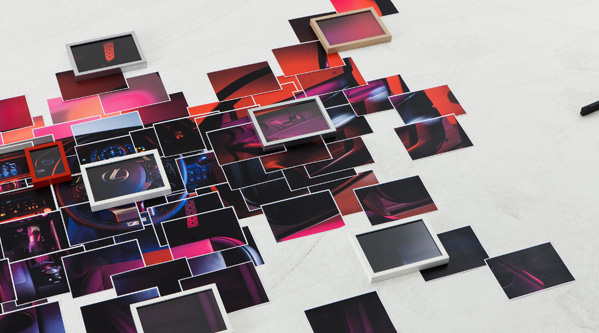 The Lexus Art Project has come to a close, and we can’t wait to show you the final finished artworks, as well as how they were created.

Over six long days, almost every possible angle of the the new Lexus IS was captured under different lighting conditions and photographic exposures to create more than 1000 A4 colour prints that would act as source material for the two enormous photographic collages finally created.

One artwork concentrated on the exterior of the IS, the other on the interior, but both aimed to express the simple idea that the new Lexus IS is more than the sum of its parts.

The team behind the first exterior artwork took a modular approach, attaching and then re-attaching the prints with drawing pins to a trio of almost vertical foam boards until they were happy with the basic composition and overall effect.

With each A4 sheet naturally curving slightly and different coloured sections placed side by side – blue next to orange next to pink – the intent was to make the image itself become three-dimensional, abstract and slightly pixellated, but still obviously with the IS at its centre.

With the groundwork laid, the second interior artwork was composed on the white floor of the London photography studio space to create a similar although ultimately flatter effect.

Focusing on the dashboard and interior door panels opened out, the artwork allows the viewer to see much more of the interior than would normally be possible and with the help of framing certain details allowed it to gain depth and dimension too.

We’ve still got the final results of Peter Guenzel’s documentary photography of the process to show – see a few more samples alongside this blog – and a video of the project to be edited and soundtracked by acclaimed producer and composer Arlen Figgis.

Then there’s Stephen Lenthall’s immaculately-lit still-life details of the IS which will soon be ready to view and a host of different photographic angles from Instagram’s talented London group, who passed by at various stages of the process – including mob-handed on the final day – to see the car depart.

All will be accessible through this blog and available to view in the flesh too, at future Lexus events.