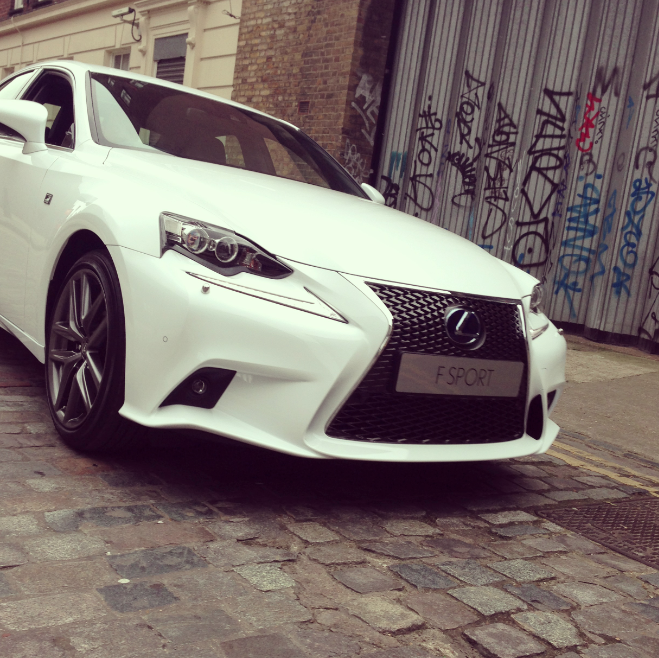 The only Lexus IS currently in the UK glides into a secret London studio later today, to star in an exciting project featuring some of Europe’s finest photographers and video artists.

Over the next six days, this creative group is aiming to capture some of the beautiful design details and stunning technology on this sharp-suited new saloon, from which we will build a series of artworks.

For the latest on our project, catch up with our first update, here.

The group aims to produce everything, from photo collages to video, and all of which will be showcased on the Lexus blog. If there’s a particular element or detail of the car you’d like to see photographed, let us know via Twitter, or by leaving a comment here.

The project ensemble will be co-ordinated by Guy Bird, a regular contributor to CAR, Wallpaper* and Esquire magazines as well as to the Lexus Blog where he writes about cars, design, art and music.

A veteran of numerous design projects worldwide including clients like Nokia, the BBC and the Irish Arts Council, this will be his first art direction job directly for an automotive brand.

Lead photographer for the project is Matt Vosper, acclaimed for his work for car magazines as diverse as Auto Express and Intersection. Tasked with focusing on the exterior of the car, he will be at the heart of capturing and editing the high quality photographs required to make up some of the key works planned.

Still life specialist Stephen Lenthall, whose photography regularly graces the pages of design magazines Wallpaper* and Creative Review, will be pursuing, in his own words, “a more graphic and oblique take on things,” by highlighting some of the excellent new elements of the IS, in close-up detail both inside and out. Look out for his incredibly clean and expertly-lit photographs on the click-through gallery section of his blog’s website in the coming weeks and see www.lenthall.co.uk for more of his incredible work.

Peter Guenzel is the third man in our brilliant photographer trio, with a track record that includes editorial and advertising work for luxury carmakers and product designers plus media outlets including German GQ, Elle Decor Italia and The Guardian Weekend. For Lexus, his brief is to document the whole project using only natural light and his superb eye to tell the story of the shoot, from the people involved in the creation of the art, to the atmosphere of the building and surrounding locale. See www.peterguenzel.com for more of his stunning work.

The final piece of the main artistic puzzle will be superb videographer, film editor and music composer Arlen Figgis. Son of feature film director Mike Figgis, Arlen has a highly impressive CV in his own right, recently producing short films for Smirnoff and Swarovski as well as remixes for Roots Manuva and the Fun Lovin’ Criminals plus soundtrack work for the feature film Leaving Las Vegas starring Nicholas Cage. For Lexus he will not only be editing the behind the scenes video for the Lexus IS Art Project but also lending one of his original music scores to the mix. Look out for it on the Lexus Blog or You Tube very soon and check out www.arlenfiggis.com to see and hear more of Arlen’s talents.

And if all that wasn’t enough – and you’re already switched on to the delights of photo-sharing website and app Instagram – you’ll also be able to keep an eye on the project’s developments over the coming week as some of London’s finest Instagramers pass by the studio to record their individual take on proceedings.