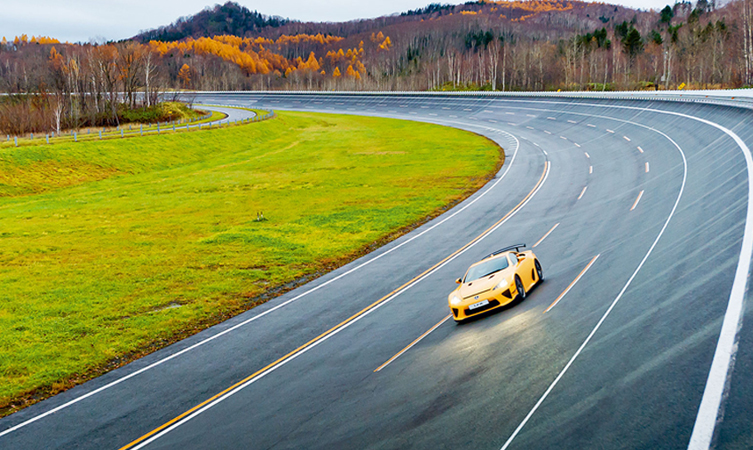 Or more exactly, how Lexus test drives a car. Shibetsu is a 3.59-square mile site on Hokkaido, northern Japan, where a team of 200 engineers put the latest models and secret concept cars through their paces.

Shibetsu Proving Ground — or SPG — opened in 1984 after six years of planning and building. Rumor has it that the scale of the construction was so large the Soviets mistook it for a fort being created by the Japanese.

Hidden behind heavy security and tall metal fences, the Shibetsu site comprises five circuits, each varying in size and function. The longest of these is 6.2 miles, which also includes a staggering 2.4-mile-long straight, more than ample room for a jet plane, let alone the large quantity of test cars that take to its routes each year.

The tracks are surrounded with tiny villages of buildings and facilities, used to assess and maintain all kinds of vehicles, ranging from production cars to highly confidential prototype models. Shibetsu’s reputation precedes it — simply speaking, it is the best and biggest proving ground in Asia.

The high-speed straight of the main circuit isn’t Shibetsu’s only cutting-edge feature. At the end of the straight track sits the 450R, a 450-meter-radius turn, with a bank angled at 43 degrees. This turn is designed in such a way that the driver can negotiate it without applying brakes at a cruising speed of 125 mph. Then comes the 1000R S-shaped bend, followed by the 250R, another superfast turn.

The four other circuits at Shibetsu also have their own special features — such as tree-lined country roads — to help put vehicles through their paces. To examine the effects of certain road conditions on Lexus vehicles, more than 20 road surfaces unique to different regions and countries around the world, such as the German autobahns, have been duplicated and installed on several sections of the courses at Shibetsu.

Shibetsu’s geographical location in the north of Japan, beset by extreme weather conditions throughout the year, also makes it globally unique as a testing ground. Following the kaleidoscopic rainbow of fall leaves comes the harsh winter, when heavy snow is accompanied by subzero temperatures, sometimes reaching as low as minus 4 degrees Fahrenheit.

The town receives about three feet of snow on average per year, and that depth can double in the surrounding mountains. The severity of the winter weather conditions may seem inhospitable to some, but the engineers admit that the bitter cold and heavy snow are actually to their advantage.

“This location was chosen especially for its weather conditions,” says Fumitaka Nakamura, general manager at SPG. “The whole area is covered with snow over a period of four months, starting in November, with the peak snowfall coming between January and February.”

SPG brims over with everything the Lexus automobile engineer — or takumi — needs to hone the vehicles.

During the winter, the main circuit is closed, but Circuit No. 3 — a midsize course — comes into its own when its snow-covered surface is used for high-speed testing. Facilities to assess brakes, radiators and batteries in freezing environments are taken advantage of.

“It’s harsh on humans, but these tests in extremely cold conditions are essential to ensure the quality and durability of our products,” adds Nakamura.

Given the nature of the work that happens at SPG, thorough safety and security measures are put in place throughout the site. CCTV keeps a watchful eye over all corners of the proving ground at the control center. Should an accident occur, everyone on the ground carries a walkie-talkie so that help can be summoned in no time at all. Even the plain-looking guardrails have received special treatment to help reduce the severity of injury in case a car crashes.

“Since the main town is 12 miles away from here, we liaise with local authorities to have a so-called doctor helicopter dispatched in case of emergency,” Nakamura explains. “The doctors board an emergency helicopter and land on the ground to treat the injured as quickly as possible.”

The tracks at Shibetsu are laced with various tricky twists and turns to put Lexus models to the test. The 450R turn is an asphalt road that curves up at 43 degrees.

Building it according to the original blueprint was not an easy job. In 1985, a road roller was dangled over the highest edge of the curve from a huge crane with strong wire, accompanied by heavy machinery, in order to lay the tarmac on the bank in question. This method was brand-new and bold back then, but was so successful it is still employed today.

“The SPG has also helped quicken the whole process of development; the engineers get feedback from test-driving a lot quicker, and the speed with which the amends are made has been made significantly faster, so as to constantly improve the prototypes during the development stages,” says chief engineer Hideki Watanabe. “All of that has led to the engineers being able to devote more time to fine-tuning in order to achieve truly outstanding cars.”

This first appeared in Beyond magazine. Read the full article on Lexus International.