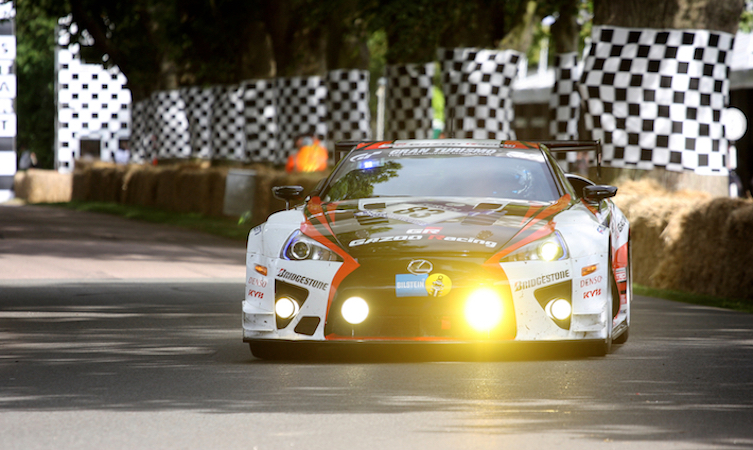 The Goodwood Festival of Speed is a world-renowned celebration of the history and culture of the automobile, and as such has been the scene of countless debuts and memorable moments. In view of this, Lexus has set the wheels in motion to create a series of new special memories as the 2020 event is combined into this week’s Goodwood SpeedWeek online extravaganza.

And that got us thinking about some of the memorable moments we have enjoyed over the past decade of participation in Lord March’s epic motoring shindig. Scroll down to view six of our favourites, and why not tell us about yours by leaving a comment in the reply box at the bottom of the page.

Arriving at the Festival of Speed fresh from its SP8 class win in the 2011 Nürburgring 24 Hours, British fans got an eyeful of the race-prepared Lexus LFA as Gazoo Racing driver and team manager Akira Iida took an extremely committed blast up the famous hill climb in car #88. As if that wasn’t enough, however, the 2011 event also saw the world dynamic debut of the LFA Nürburgring Package.

Lexus chose the 2014 Goodwood Festival of Speed to introduce UK enthusiasts to the brawny new high-performance RC F coupe, which, as the video above revealed, shares its parentage with the LFA. Giving show goers a taste of its performance potential – not to mention its world-first torque-vectoring differential – the car was a highlight of the popular First Glance sessions.

Lexus marked the 2016 event with both prestige and power. You’ll have to scroll down to the next highlight to understand more about the latter, but the former was achieved with suitable glamour thanks to the UK debut of the all-new LC flagship coupe. This was no static display either, with pedal-to-the-metal duties shared by racing drivers Mike Conway and Scott Pruett.

In between stints behind the wheel of the prestigious new Lexus LC (see highlight above), racing drivers Mike Conway and Scott Pruett found it in their hearts to take four fast friends up Goodwood’s infamous hill climb. Each high-performance Lexus F model has usually been showcased individually but in 2016 the RC F Carbon, new GS F saloon, race-prepared RC F GT3 and LFA supercar combined their efforts to dramatic effect.

Without doubt one of the most exciting and visceral moments in Lexus’s history at Goodwood came courtesy of drift superstar Ahmad Daham’s charge up the hill climb. Though in control of the world’s most powerful RC F, Daham was not chasing the clock; instead he wanted to demonstrate how quickly he could vaporise a set of rear tyres. And in so doing, staked his place in Goodwood’s top nine most epic donuts.

Three years after its coupe sibling wowed the Goodwood crowds, Lexus International vice president Koji Sato was delighted to be able to unveil the world-first showing of the new LC Convertible prototype at last year’s Festival of Speed. It was also devised as an opportunity for professional Super GT racing driver Nick Cassidy to take it up Lord March’s infamous driveway and provide valuable final feedback for the engineering team.