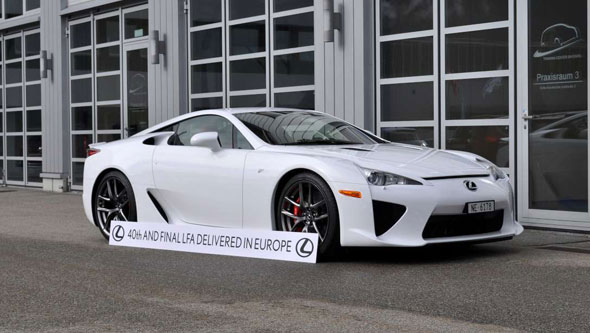 Lexus has delivered its last LFA to a customer, marking the end of commercialisation of the supercar produced at the rate of 1 car per day between 15 December 2010 and 14 December 2012.

The proud owner of LFA #493 is Mr Nicolas Schilling, who said. “I was first impressed by the design of the LFA, but it’s when I heard the sound of the engine of this breath-taking machine that I knew it was my dream car!”.

In total, 40 LFA have been sold in Europe, including 4 LFA Nürburgring Package. The first delivery took place in February 2011. A European customer was the only client in the world to purchase 3 LFA, while two others ordered a second unit after having received their first delivery.

White was the most popular LFA colour in Europe (7 Whitest White and 7 Pearl White units sold), followed by Black (5 units) and Pearl Red (4). Jeremy Clarkson’s favourite colour, Pearl Blue, was chosen by 2 customers – while 2 others opted for the Pearl Yellow colour featured in the Top Gear US road trip broadcasted on Feb 3 by the BBC.