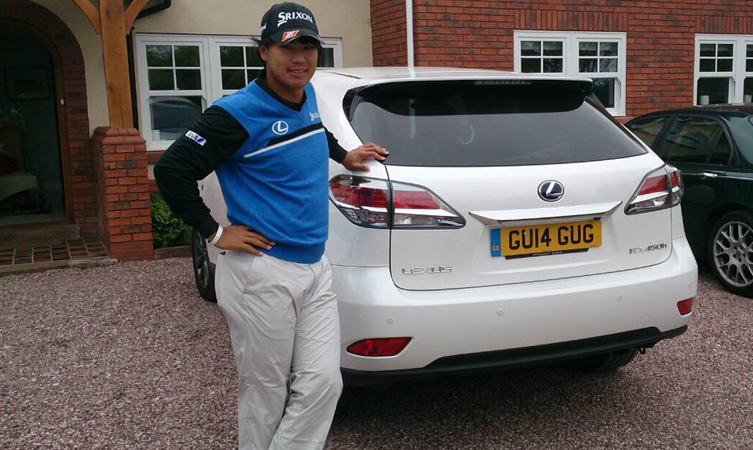 The world famous Open Championship tees off at the Royal Liverpool course on Thursday and a golfer to definitely keep an eye on is Lexus-sponsored Hideki Matsuyama.

The 22-year-old only turned professional last year, but he carded a top 10 finish at the 2013 Open Championship and has already claimed his first PGA tour win – at the Memorial Tournament in May. We caught up with him as he prepared for the event at Hoylake.

Lexus Blog: You finished sixth at the 2013 Open Championship at Muirfield, what are your hopes for this year’s event at Royal Liverpool?

Hideki Matsuyama: It is my objective to win a major tournament, therefore I will do my best to win.

LB: What are the main differences between playing on a links golf course like Royal Liverpool and the courses you grew up playing on in Japan?

HM: I have not experienced this year’s course therefore will not know until I have played a round, however I have heard that it is a tough course. In discussion with the caddy, Shindo, I will do my best to conquer the course.

LB: You turned pro in 2013 and won your first PGA tournament in April 2014 and now you are close to being one of the top 10 golfers in the world. Are you surprised by the success you’ve achieved in such a short space of time?

HM: I believe that it is the result of my practice. However, my objective is to win a major tournament, therefore I will continue to practice even more.

LB: What was it like to be congratulated after your win at the Memorial Tournament by Jack Nicklaus? What did he say to you?

LB: How do you prepare mentally and physically for a competition like the Open Championship?

HM: After the US Open, I returned to Japan and played in Sega Sammy Cup, in preparation for The Open. I am confident in my belief that my practice will not disappoint me.

LB: Playing golf around the world, do you take any home comforts from Japan with you and what do you miss most being away from home?

HM: Not particularly, but I like movies and take my DVD player around with me. Incidentally, I also watch movies during transfer in my Lexus.

LB: Lexus RX, NX or RC F ? which of these Lexus cars would you choose and why?

HM:I have been on RX but not NX and RC F yet. I heard from a Lexus staff that both of these cars have a good reputation. I like driving and look forward to driving them.

LB: Can you see any similarities between Lexus cars and professional golf?

HM: I think the similarity is technical capabilities. The world of golf is truly tough, therefore high technique is required. I think it is the same for Lexus. Compete with high technological strength to win against the competitor brands. I will continue to practice more to improve my techniques.

LB: Away from the golf course, how do you relax?

HM: As I mentioned earlier, I watch DVD movies to relax. Otherwise, I play basketball with the team members to exercise and for a change.

LB: Famously, Mr Toyoda loves to drive Lexus race cars. Is this something you would like to do?

Hideki Matsuyama tees off alongside Rory McIlroy and Jordan Spieth at 09:26 on Thursday.