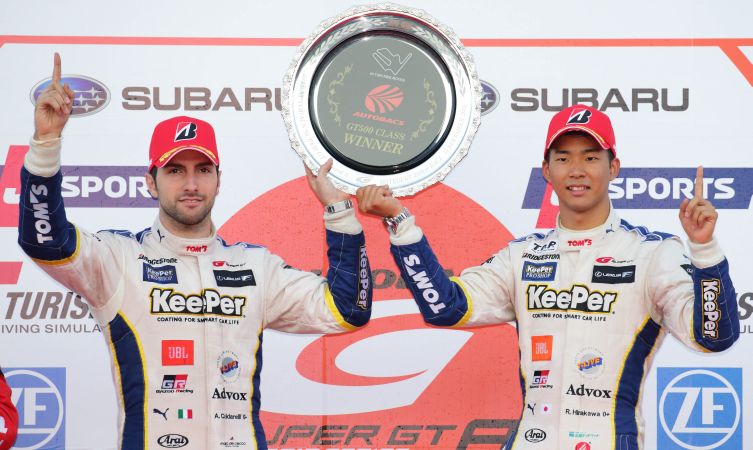 Competition was predictably fierce in the eighth and final round of the 2015 Super GT championship, held last weekend at the Twin Ring Motegi circuit in Tochigi Prefecture, Japan. With no success ballast enforced in this final race, all competitors were light on their toes for Motegi’s demanding stop and go layout that helps the fastest accelerating and hardest braking cars to rise to the top.

Zent Cerumo and Petronas TOM’S were among the six teams that had a mathematical chance of winning the top GT500 championship in their Lexus RC F models, while the KeePer TOM’S team was keen to secure its second victory of the season in the third of six Lexus RC F racers on the grid. 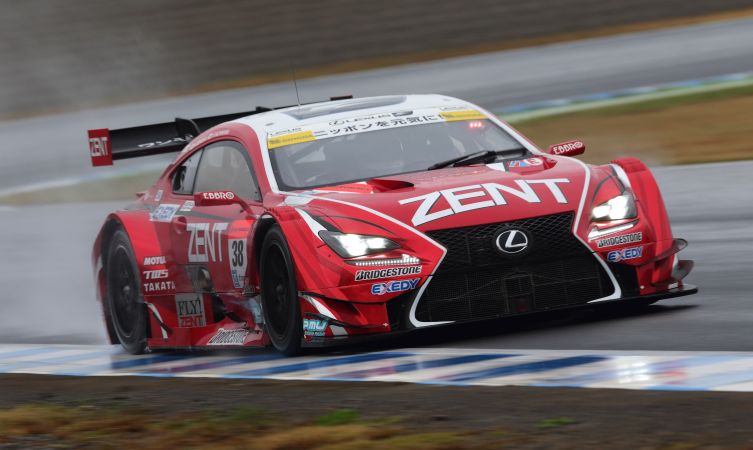 Qualifying took place in cold, wet weather that made track conditions treacherous. Nevertheless, equipped with the softest set of wet tyres, driver Ryo Hirakawa wrestled the #37 KeePer TOM’S Lexus RC F to its second pole position of the season with a 1’49.738 lap time that put it 0.155 and 0.243 seconds ahead of the Honda NSX concepts in second and third places respectively. 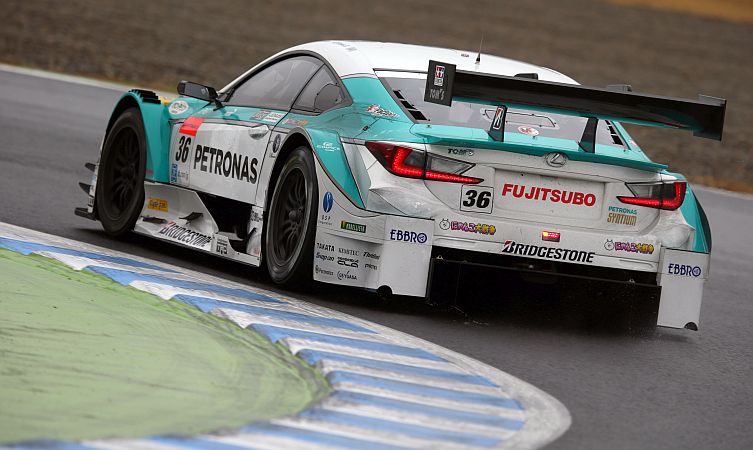 The weather failed to improve on race day for the morning’s free practice session. And apart from an extended warm-up spell on slick tyres, all competitors reverted to full wets for the start of the race proper. 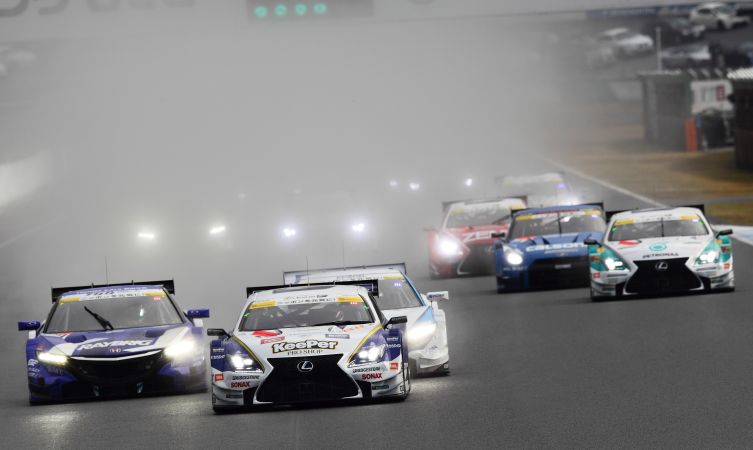 Having secured pole for the rolling start, Andrea Caldarelli maintained the lead for the #37 RC F into and out of the first corner, settling into a solid pace of around 1’50 per lap with the second-placed NSX driven by Bertrand Baguette close behind. After a dozen-or-so laps under clear skies the track had begun to dry, so many teams chose to pit at the earliest opportunity (18th lap of 53-lap 250km race) to change drivers and switch to full slick tyres. But with a decent lead over the majority of the pack, the KeePer TOM’S team waited until lap 22 before calling the Lexus back in for Hirakawa to take over. 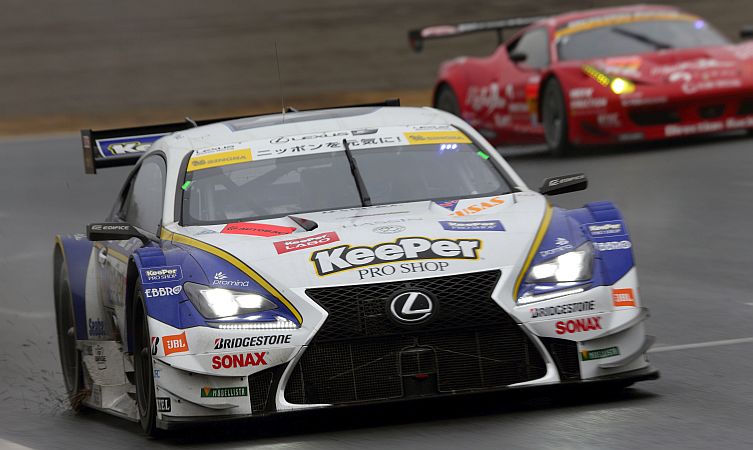 Baguette was now more than a minute ahead of the rest of the pack and showed no sign of wanting to change tyres. However, when the NSX did eventually pull in for the pit stop, the move coincided with an incident on track that brought out the safety car and wiped out Baguette’s lead. The safety car stayed out until lap 31, at which point all seven GT500 cars at the head of the pack were compressed into a space the equivalent of one second at race speed. 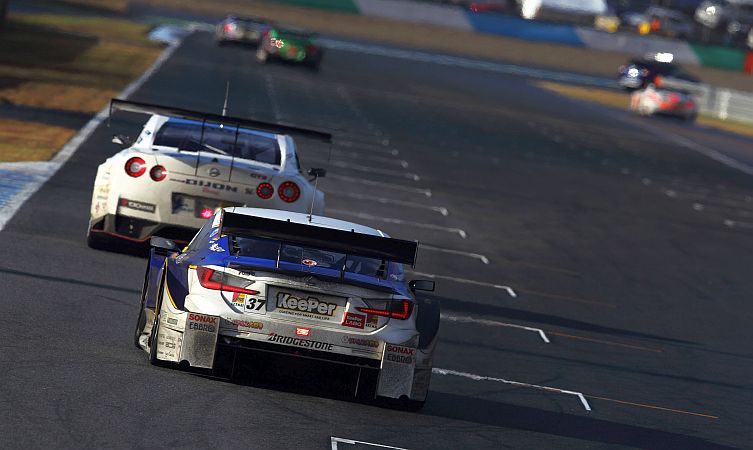 Immediately after the restart, Hirakawa resumed the lead but ran wide on the next corner, allowing just enough room for the championship-leading Motul Autech GT-R to squeeze through on the inside. Shadowing the Nissan’s every move, Hirakawa seized the next opportunity to regain the lead when the GT-R was slowed by a group of back-markers on lap 41. 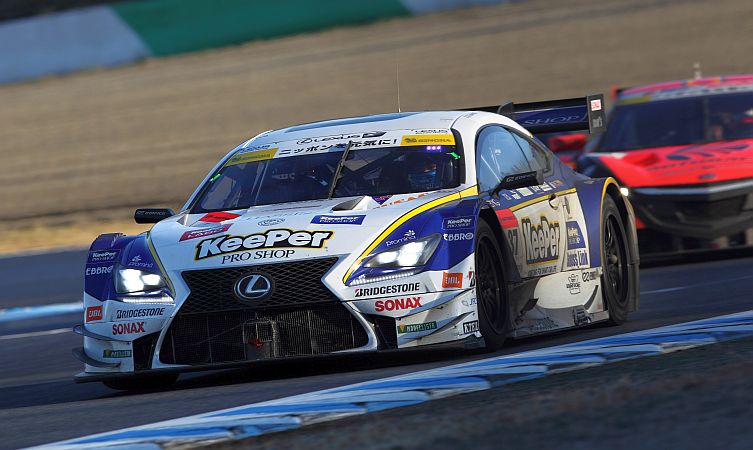 Despite the best efforts of three challengers following closely behind, not to mention the additional hazard of more back-markers, the #37 Lexus RC F held on to its hard-fought lead right the way through to the end of the race. With plenty of action and drama, this season finale was a real crowd-pleaser and marked a decisive second victory for the KeePer TOM’S Lexus RC F team this year. 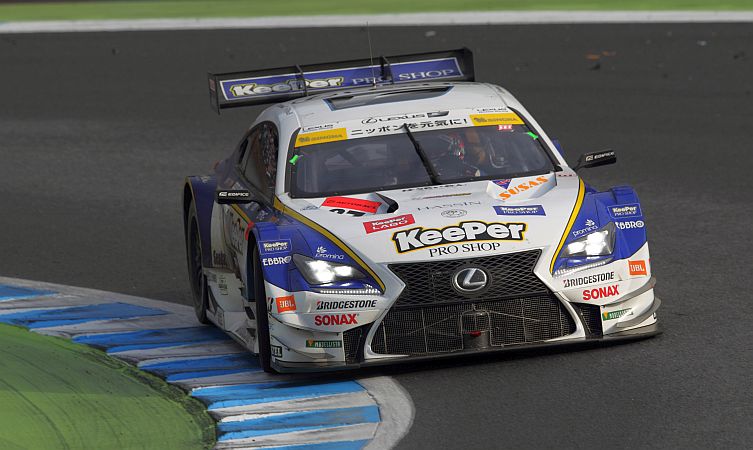 “I’m very happy that we got this win. We were able to run very well in today’s race. The track was wet at the start, so we had trouble with the tyre choice; and when we chose the hard tyres, things were a bit tough at first. Despite that, I was able to open up a gap over the rest of the field by pushing as hard as I could. The timing of the pit stop also went very well, and I think that was an important factor.” 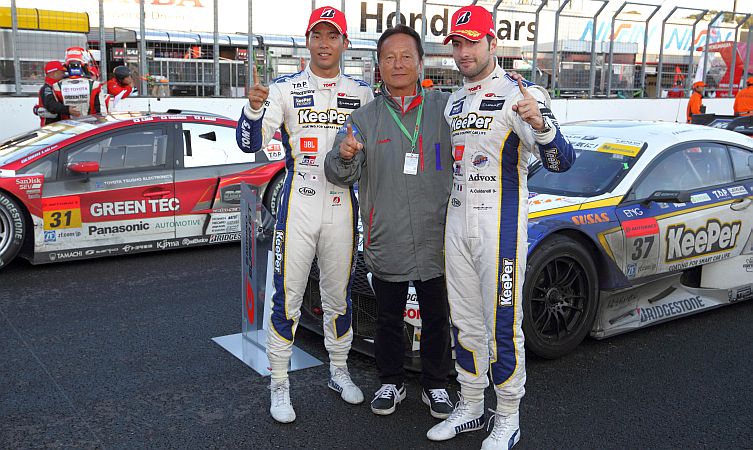 “In today’s race the safety car came out during my stint in the second half, and that all but eliminated the lead I had over the second place car. But I was then able to enjoy battling with my rivals. I am just very happy that we were able to win this last race of the season.”