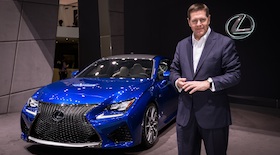 There was no missing the brutish racing version of the new Lexus RC F coupe at the 2014 Geneva Motor Show.

Decked out with an Airbus-sized rear-wing and wheel arches housing super-wide, sticky slick tyres, the RC F GT3 coupe is being engineered for gentleman racers ambitious to beat sporty rivals on the world’s race tracks.

Its launch is a clear sign of the growing confidence at Lexus. The RC F GT3 – which at Geneva was kitted out with mirror finish decals – is designed to reflect glory onto a model line-up that expands every year.

It’s not just the RC coupe that’s new on the scene. Lexus is powering ahead to launch a crossover SUV based on the dramatically-styled LF-NX, called the NX. Set to make its public debut at the Beijing Motor Show in April, the NX will slot into the range below the well-known RX, and aims to make Lexus ownership attractive to style-conscious drivers who have not considered the brand before.

The change in pace is welcomed by Mark Templin, executive vice-president of Lexus International.

“The company has put a lot of resources into Lexus. Finally we are doing the things I wish we had done ten years ago,” he says with a smile.

Templin, a straight- and fast-talking American, should know. He’s worked at Lexus for 25 years and watched the growing pains of a company that at times in its past has lacked decisive direction.

“Akio Toyoda is very passionate about Lexus,” he says. “Lexus is the only division that reports directly to him.”

Just like its German rivals, the standalone Lexus division now has dedicated teams for design, engineering, planning, sales and marketing.

“Our goal is not to grow really fast, but to grow in a slow, methodical and steady way over a long, long period of time,” he says.

The benefit ought to be seen most markedly in Western Europe.

“We were building cars that were successful in the US, Russia, Mid-East and Japan. Those are enormous markets. But we never had the right product mix to meet European demands, until recently,” says Templin.

Three new RC coupes — a 300h hybrid model, a V6-powered RC F Sport and a mighty 450bhp V8-powered RC F performance flagship — should start to address that deficiency in a market where sporty two-doors sell well when matched to a premium badge.

Templin also believes the next few years will see hybrids grow in popularity as legislators and drivers focus on other environmental pollutants.

“We feel that CO2 isn’t the only exhaust emission we should be worried about. We need to be more concerned with other things such as particulate emissions, which impact air quality in towns and cities. Hybrid is better than diesel at those sort of things. We feel very strongly about it,” he adds.

In fact, the 300h hybrid will become the tenth hybrid model in the range by the year’s end, giving Lexus the world’s most extensive range of cars with electrified powertrains.

“When we started to build hybrids, Facebook was being run out of a dorm room and YouTube didn’t exist,” he jokes.

“The world gets an ever smaller place and all over the world drivers are concerned about fuel economy and the environment. Our hybrid technology is well-placed to exploit that.”

Templin is masterminding the global development of Lexus, and one of his jobs is to boost sales in Europe and the Middle East to catch up with the US.

“We have a great position in the US and now is the time to develop our new models and range of cars for a global audience,” he says.

For those that don’t know, Lexus was a rip-roaring hit in 1989 when it was launched in the US and is now the top-selling luxury brand, selling around 300,000 cars a year there, about 60 per cent of global sales.

Cars like the Lexus RC F GT3, the aspirational two-door RC coupe with its swooping styling and the modish NX will help spread the Lexus message to a new group of customers. “We will build awareness of Lexus in Europe,” says Templin, “I’m confident we can catch up with the US.

“And our new customers will be treated as well as the our first.”