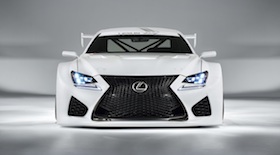 The Lexus RC F GT3 concept is set to make its world debut at the Geneva motor show next week – but here’s an exclusive first look.

Shot at a secret location in Europe, these images give an impression of just how imposing the RC will look when it lines up on the grid of GT3 races from 2015. The white paintwork graphics allow a clear look at the body modifications including super-wide arches, low front apron and multiple air vents, while the hologram-style ‘RC F’ and Lexus logos leave no doubt as to its identity.

The no-nonsense racer has been jointly developed by Lexus International and its subsidiary Techno Craft, and built by the latter in Japan. The RC F GT3 concept is based on the new RC F coupe, the most powerful V8 performance car yet developed by Lexus.

At 4705mm long, 2000mm wide, 1270mm high and with a wheelbase of 2730mm, the RC F GT3 concept has dimension that are wider and lower that the standard RC F, yet, with the interior stripped to racing specification, weighs just 1,250kg.

The launch of the RC F GT3 concept marks the start of a long-term commitment to GT3 racing by Lexus. Testing will begin this year, with a view to supporting sports car racing teams participating in 2015 GT3 racing categories.

Like the look of this? Take a look at the RC F Super GT which is soon set to start racing in Japan.

You should also see out new images of the RC F Sport.