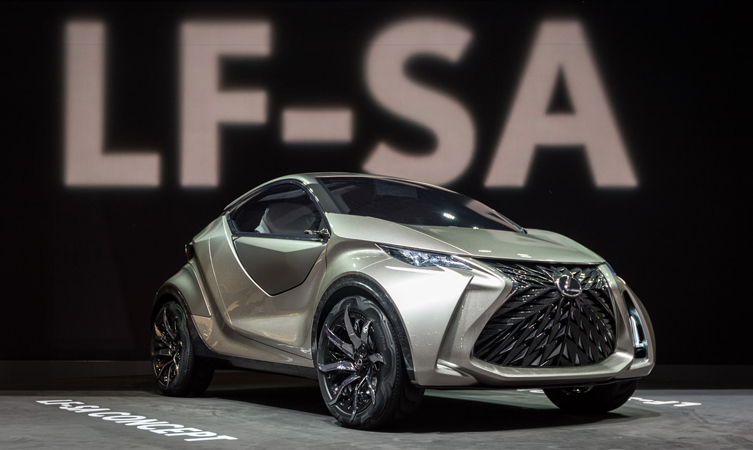 Our team from the Lexus Blog has been reporting from the Geneva motor show, supplying the latest news, announcements and pictures from the show floor.

Scroll down through this post to catch up on the news on the day that the Lexus LF-SA was revealed, and there were European debuts for the Lexus GS F and the LF-C2. Let us know what you think about the cars in the comments section below or get in touch with us on Twitter or Facebook.

16:36: We’ve now been inside the LF-SA – and it looks just as amazing from the driver’s seat as it does from the outside.

Have a look at the full gallery of LF-SA photographs here: Lexus LF-SA concept car revealed

14:20 On the Lexus stand is “The RC F Experience”, a thrilling virtual ride in a Lexus RC F around a race track. Strap on an Oculus Rift headset and a pair of headphones and ride shotgun as a professional driver takes you at full pelt.

If you’re not a great passenger, don’t worry – you can choose between a smooth, fast trip or an aggressive, drift-filled slide-fest. If you miss the show, fear not – in a few days Lexus is releasing an app that recreates the experience on your phone.

12:27 Take a look through gallery of the Lexus LF-SA and let us know what you think of the car – either in the comments section below or on Twitter or Facebook.
12:12: There’s another Lexus concept car on the stand at Geneva – the LF-C2. It is making its European debut, after being revealed at the LA Auto show last year.
Read more here: Lexus LF-C2 stars at Geneva motor show 2015

11:30 Well here it is – the Lexus LF-SA has been revealed! To celebrate its 25th anniversary, Lexus challenged ED2, its European design studio, to create a concept of an ultra-compact (sub-B-segment) urban 2+2 model.
Read the full story here: Lexus LF-SA concept car revealed

9:00 First pictures from the show floor are now in… As well as offering a chance to look at the new car’s listed below, today’s event also offers a chance to catch up with the very latest developments from elsewhere in the Lexus line up, including the  latest in in-car entertainment technology.

07:40 Good morning from Geneva! It’s gearing up to be an exciting day. The Lexus press conference is scheduled to start at 11.30 UK time. Have a look at what we’re expecting to see in the stories below.

The Lexus LF-SA concept, to be revealed during the Lexus press conference on 3 March at 11.30 UK time, signals an exploration of unexpected territories for the premium brand, reflecting new design trends to create a luxurious, driver-focused vehicle. Whet your whistle by reading the post below, and make sure you are here on Tuesday for the first images of this exciting new concept.

The Lexus GS F takes the refined GS four-door saloon and turns up the performance quotient with a potent normally-aspirated 5.0-litre V8 engine, earning it the coveted ‘F’ designation. Initially revealed to the world at the Detroit show in January, the 2015 Geneva Motor Show is the first opportunity for European Lexus buyers to see the new GS F in the metal. Discover more about the GS F in the posts below.

Also making its European debut at the 2015 Geneva Motor Show is the LF-C2 concept, originally unveiled at the LA Auto Show in 2014. This stylish 2+2 roadster concept explores new styling themes that will become part of a new styling language for the Lexus brand in the future – it’s a beauty on the screen, and one that will be better in person. We’ll bring you the latest images from the show, but you can read more about the LF-C2 in the posts below.

Join us here on the Lexus blog for all the latest news from the 2015 Geneva International Motor Show, or catch the announcements by following us on social media, including Twitter, Facebook and Google+.