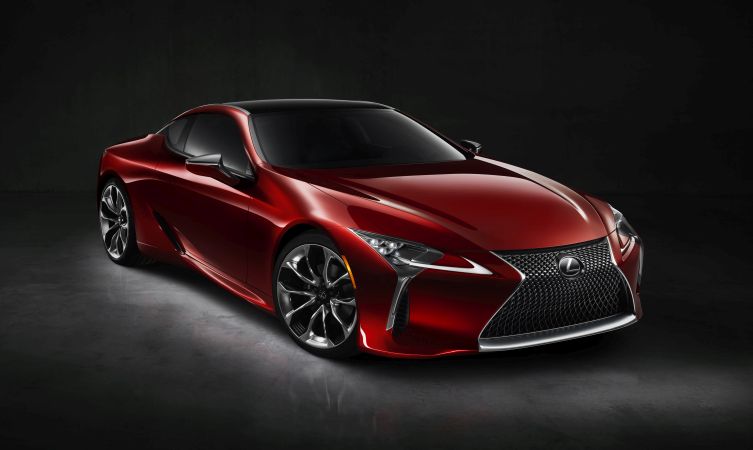 The all-new Lexus LC 500 may have just been unveiled at the 2016 Detroit motor show, but it’s already made an impressive impact.

While the Lexus LF-LC concept generated worldwide excitement when it debuted at the same event four years ago, this provocative, athletic flagship coupe makes the strongest statement yet about our future product direction. Here’s what people are saying.

What the press are saying 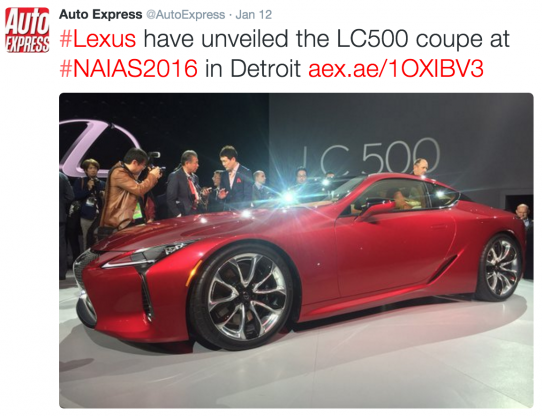 Lexus may have already won the 2016 Detroit Motor Show with its new flagship coupe, called the LC 500. It’s the production version of the LF-LC concept car, and is poised to take on the Mercedes SL.

Renamed for production, the LC 500 features slightly toned down styling from that dramatic concept car. The trademark angular Lexus grille graces the front, while the sharp detailing and shape is reminiscent of the LFA supercar.

While unveiling a new super coupe, the LC, Lexus chief executive Akio Toyoda said that he’d received letters telling him that his luxury brand’s cars were boring, and he agreed. He assured his audience, however, that the latest design ethos and dynamic identity will make Lexus cars interesting to look at and more fun to drive. “I took [the letters] to heart,” he said, “and I’m ensuring that the word boring and Lexus will never occupy the same sentence ever again.”

Read more: 10 things we learned at the 2016 Detroit auto show | The Telegraph

Not since the LFA have we been this 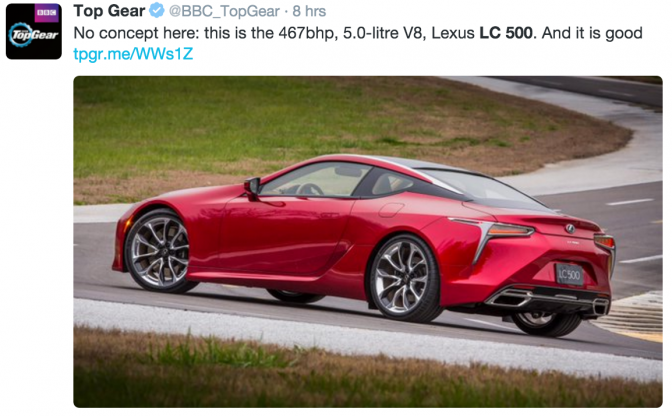 excited about a Lexus. It’s called the LC 500, and it’s essentially the roadgoing format of the LF-LC Concept of 2012. And it is good.

… Lexus aimed to make a flagship coupe for the whole brand. And we think it may just have done it.

The executive speeches that accompany the launch of new cars at motor shows are typically all the same. Best in class this, emotional that.

The exception came today when Toyota and Lexus chief Akio Toyoda unveiled the new Lexus LC500. The speech was as entertaining as the LC’s baby LFA looks and spec sheet.

… Toyoda said that the LF-LC was created as pure concept car, with no production intent. “But the positive reaction of media and customers made me change my mind. We listened and made it real.” 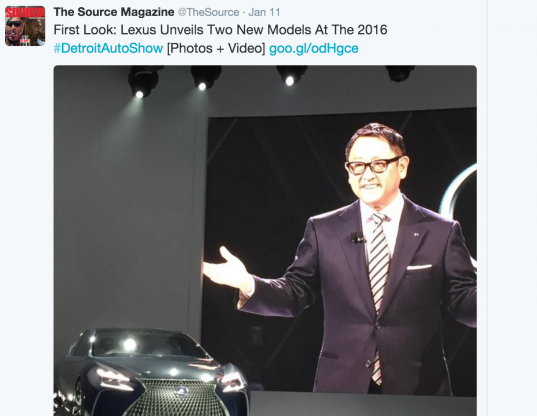 The Lexus LC 500 was the showstopper of the brand’s showcase. The unveiled model featured a red candy paint exterior with a beige leather interior and is set to hit showroom floors in 2018.

The Lexus LF-FC concept car at today’s NAIAS showcase featured a sleek, greyish-blue exterior with a beige leather interior and is set to hit showroom floors in 2020.

Lexus has revealed its new LC 500 coupe at the Detroit motor show. The new model is the production version of the LF-LC concept car, which made its debut at the same show in 2012.

The production model keeps many of the same design cues as the concept, keeping that car’s swept-back roofline and angular headlights. Inside, it features a digital instrument cluster and Lexus’s next-generation infotainment system.

Powering the LC 500 coupé is the same naturally aspirated 5.0-litre V8 that features in the RC F and GS F models. Here, it produces 467bhp an 389lb ft of torque and sends its power to the rear wheels through a 10-speed automatic transmission. Lexus says the new model can reach 60mph from a standing start in less than four and a half seconds. 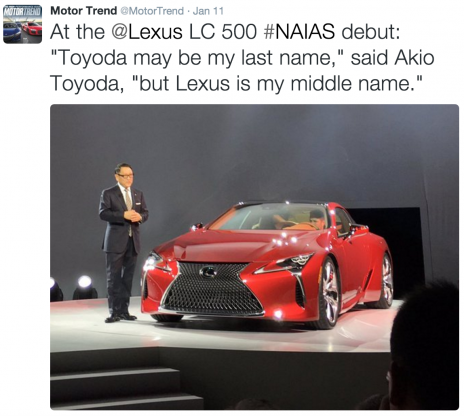 latest example of Akio Toyoda’s claim that, since a few years ago, every Lexus has aimed to be exhilarating in every way — from the exterior styling and interior to what’s under the hood and how the car drives.

…Revealed on an enormous stage compared to most other debuts, the 2018 Lexus LC 500 is an image-building two-door that could emotionally draw buyers to the brand more than the controversial spindle grille has over the last few years.

…Toyoda noted that like Sofia Vergara, he may have a slight accent when speaking in English, but the language he does speak is cars. We’ve driven prototypes of the LC 500 before, and can’t wait until we drive and test a production-ready model.

What the public are saying 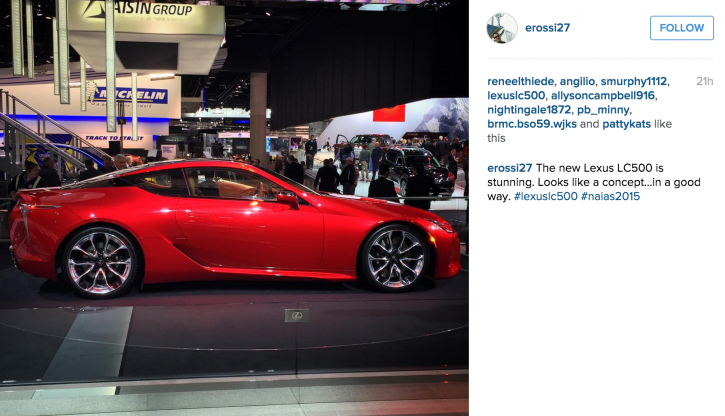 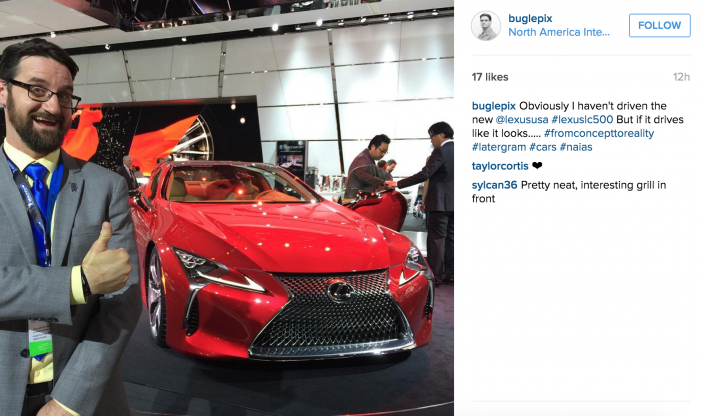 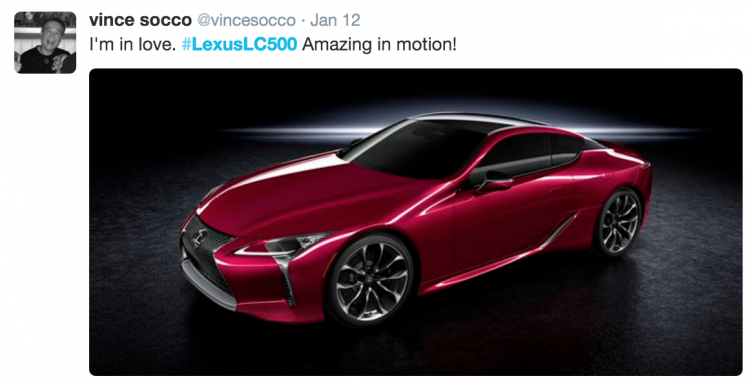