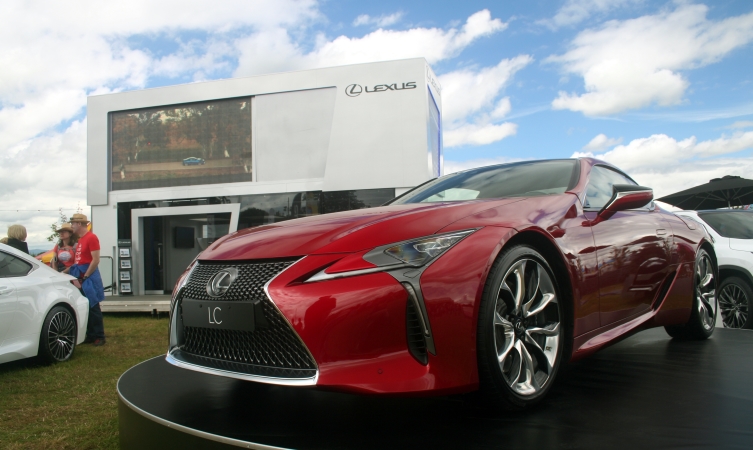 Lexus got into the festival spirit as we joined tens of thousands for a weekend of dream cars and great music at CarFest North. Headlining the Lexus stand was the all new LC coupe – our sleek and powerful luxury sports coupe – making another public outing after its successful UK debut at the Goodwood Festival of Speed.

CarFest North is the ultimate family festival, combining music, cars and masses of fun activities for all ages, and best of all, everything is in support of BBC Children in Need.

The daytime action centred around the paddock and on-track displays, which took place along the winding driveway of CarFest North’s new home at Bolesworth Castle, Cheshire, before the festival transformed into a family-friendly music festival as top acts took to the stage each night.

The 467hp, V8-powered LC 500 drew the crowds to the Lexus stand all weekend as the sunshine gleamed off its crisp lines and distinctive design elements such as the signature Lexus spindle grille with new 3D mesh design and the sleek, multi-layered rear light array. For many Lexus fans, the opportunity to see this exciting new Lexus model in the metal ahead of its spring arrival proved to be a highlight of the weekend.

Lexus’ high-performance offering was represented by our current range of ‘F’ cars – an Azure Blue GS F sports saloon and the equally powerful RC F sports coupe. The crowds even got to witness the GS F on track as it was selected to perform vital duties as the Carfest course car.

On track, the driving displays contained a wide and sometimes eclectic range of automotive and motorsport exotica, spanning every era, marque and style. CarFest founder Chris Evans drove several of the vehicles down the hay bale-lined track, including some from his personal collection like the ever-popular Chitty Chitty Bang Bang.

But it was always going to be the beautiful and rare supercars that would leave an impressions on young and old minds alike, and Lexus didn’t disappoint as its legendary LFA supercar took to the track accompanied by the unmistakable sound of its 552bhp V10 engine. It was a rare privilege to see it in action, passing just a few feet from the crowds lining either side of the track.

We had a great weekend at CarFest North, and are delighted that there’s more to come when CarFest South takes place at Laverstoke Park Farm, Hampshire, from 26-28 August. If you’d like to know how you could join us there to see the all-new LC coupe in person, then subscribe to Lexus News to received details in your inbox in the coming weeks.