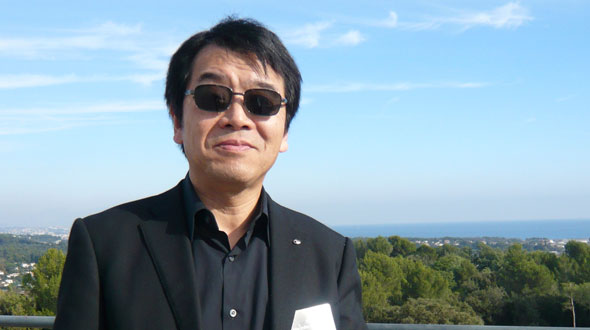 Haruhiko Tanahashi is a so-called ‘Lexus Meister’, tasked with ensuring all future Lexus cars match the soul and style of the LF-LC concept and the passion and fire of the LFA supercar. But his responsibilities don’t end there – he’s also known as Chief Engineer, Product Planning and Project General Manager, Lexus Brand Management Division.  Dressed in black from top to toe, with shades to match, I finally caught up with him on a rooftop in Nice, in the south of France and asked him more…

Q. How did you get the job of ‘Lexus Meister’, beyond your other job titles as Chief Engineer, Product Planning and Project General Manager, Lexus Brand Management Division?
Haruhiko Tanahashi (HT): “It’s a very difficult question to answer. I was already the chief engineer behind the LFA supercar and I’m sure that experience helped me.”

Q. What is your role now you’ve become a “Meister”?
HT: “I still don’t know what I’m really supposed to do regarding the Meister role [he smiles] but I do believe I’m here to pass on knowledge of what Lexus is about, both internally within the company and externally to the public. We need to strengthen the brand in the market through product and image.”

Q. …And add a little passion too?
HT: “Yes. I am the ‘go-faster meister’ [he says, making an endearingly Japanese-sounding version of the ‘Vrrrmmm’ noise while waving his hand towards the horizon, like he’s about to race over it]. I’ve loved cars since I was a child. I made models of them as a kid but now I get to make full-scale models of the LFA.”

Q. Are you the first and only Lexus Meister?
HT: “No, there have been a several Lexus Meisters in the past and there are a few now. We’re not about intervening here and there in a random way but about giving a ‘horizontal integrity’ – a consistency – in all that Lexus does.

“The job sounds a bit like a Libero in football, positioned just above the defence but bringing the whole team together?
I’m not much of a football expert! [he chuckles and shows a gold-toothed smile], but I report directly to the international group chairman of Lexus, so maybe it’s similar.”

Q. What’s the most Lexus product out there right now?
HT: “The new LS, as so many aspects of it relate to the other models.”

Q. What about the LF-LC two-door coupe shown at Detroit?
HT: “As the future of Lexus luxury and sports, it is the best expression.”

Q. Is there room for new smaller luxury cars in the range too?
HT: “There are no plans, and if there were, I couldn’t tell you about them… But because the history of Lexus is not that long we can try things out in a way older brands can’t.

Q. …And how important will design become going forward?
We gave more leeway to the designers on the LF-A specifically, we told engineers not to limit them, and that’s the general direction we are taking now. Look forward to it.

Biog
Guy Bird is a freelance writer and editor specialising in cars and design for the likes of CAR magazine, The Daily Express, Wallpaper* and Car Design News. He attends the world’s auto shows from Paris to Tokyo and has road-tested the vast majority of vehicles available in the UK over the last 18 years. www.guybird.com