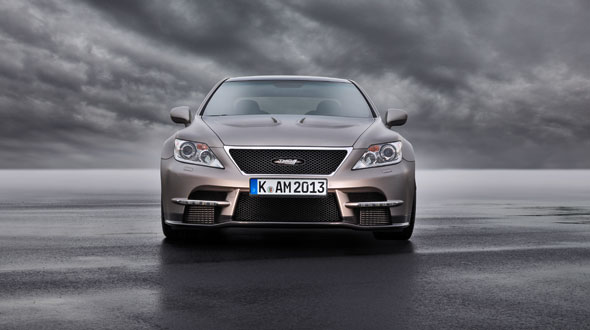 It’s the top secret Lexus LS prototype has had performance car fans scratching their heads in disbelief. First spied early in 2012, the car that many have labelled as Lexus answer to Mercedes AMG has finally been officially revealed.

Called the TMG Sports 650, the fully functioning concept car is the work of the team at Toyota Motorsport (TMG).

There’s no doubt that TMG has had a great year on the track, with a string of race victories in the FIA World Endurance Championship. Now they have worked some of their performance magic on the new Lexus LS, creating an outrageous “super sports car” that can reach almost 200mph.

Based on a 2010 Lexus LS limousine, the TMG Sports 650 is making its debut today (Tuesday November 27) at the Essen motor show in Germany. It’s a heavily modified machine that’s designed to showcase TMG’s engineering capabilities in car that pushes the limits of performance in all areas.

They have also made good use of the wind tunnel at their base in Cologne to tune the LS’s aerodynamics, so that its performance potential can be exploited on the road and the race track.

Yoshiaki Kinoshita, TMG President explains: “This is a truly remarkable car with incredible performance. We are looking forward to hearing the reaction to this showcase for TMG’s engineering capabilities.”

What do you think of the TMG Sports 650? Could it take its place alongside the IS F and the LFA? We’d love to hear your opinions.