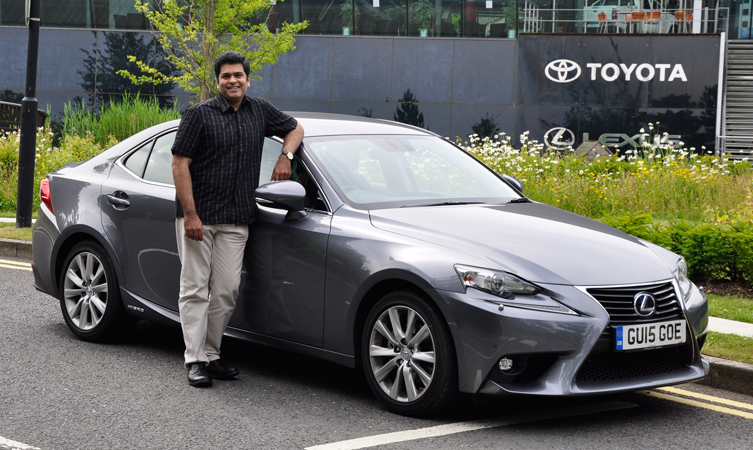 Our Lexus competition winner has told us how the “Lexus effect” won him over during his month with the IS 300h.

Sujan Perera, the 49-year-old computer systems architect from Sutton who won our January newsletter prize draw found being behind the wheel of a Lexus was a refreshing experience.

“I’ve noticed a very different way that people seem to treat me when driving. They seem to go out of their way to give way to me. I don’t know if it’s because it’s a Lexus or a new car or because it just looks nice,” Sujan told us.

“This isn’t once or twice, this has happened lots of times. My colleague said the same thing about his experience with an IS 220d; he called it the Lexus Effect.”

I’ve noticed a very different way that people seem to treat me when driving. They seem to go out of their way to give way to me.

Sujan, who spent most of his time in the IS on the A3 and weekends “pootling” around town, achieved up to an impressive sustained 60mpg. “It’s an incredible figure given the performance available,” Sujan added. “You no longer have to fear the fuel sapping impact of traffic jams.”

He praised the Lexus for the feeling of “absolute certainty” it gave him on the road. “It’s very reassuring and that sense is something that you don’t get from other cars without compromising ride quality.”

Sujan wasn’t the only one taken in by the IS 300h. “My wife Sameena is very picky about cars,” he told us. “This is the only car she had an instant liking to on sight and expressed a wish to own.”

Sujan told us how the comfort levels of the IS had helped Sameena with her bad back, which often left her in discomfort after long journeys. There were no such problems in the Lexus, thanks to its comfortable, supportive seats and compliant ride.

With the prospect of a new car on the horizon, Sujan told us that Sameena’s mind is made up: “To her, the IS will always be number one because she has the evidence that this car suits her lifestyle.”

With a Prius-owning colleague, Sujan is familiar with hybrid technology and was eager to see how it translated to the luxurious surroundings of a Lexus.

“It’s on a different level,” he told us. “It’s effortless. You don’t have to make compromises in terms of keeping up with traffic.”

He also highlighted the “effortless, serene performance”, which made his long commute less tiring, thereby improving the quality of time spent with his family in the evenings. “Together with the fantastic sound system, you can’t help but be in a good mood,” said Sujan.

He added: “You can just go anywhere efficiently and arrive fresh and unaffected by anything. That’s really valuable to me.”