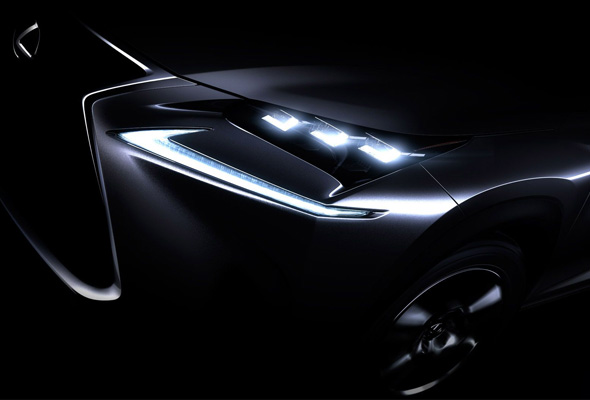 Ever since the dramatic new Lexus NX premium crossover broke cover at the Beijing Motor Show, the sharp lines of its distinctive, bold design and its technology-packed specification have captured the interest of prospective buyers.

In order to explore the NX’s design further, Lexus partnered with three different creative teams to produce NX Perspectives. This new campaign documents how each of the creative teams was inspired by the powerful design of the NX, translating the core elements of the car into expressions that span both physical and digital realms through music, art and fashion.

NX-Illuminated is borne from a collaboration between Canadian rapper Lunice and creative agency LuckyMe, and is an energetic and visually arresting production that uses defined and powerful lighting effects inspired by the NX as the backdrop for Lunice’s new music video, ‘Can’t Wait To’.

Speaking about the inspirational NX, Lucky Me’s creative director, Dominic Flannigan, said: “The best thing about the car that we’re inspired by is that it is a design statement….What we’ve tried to achieve is something that feels sculptural, that feels like it’s based on physical things, so we’re literally drawing these angles that explode out of the set.”

The second of the three projects is NX-Constructed, an audio-visual exploration of form by interactive design duo Hellicar & Lewis.

“The car itself has a very striking design, but the thing we were most intrigued by were the smaller details,” observes Pete Hellicar. These smaller details inspired the development of their interactive kaleidoscope, drawing on design features like the NX’s multi-spoked alloy wheels, the triangular-shaped negative space in the Lexus emblem, and the longer, angular shards created by the prominent swage lines running along the sides of the NX.

Referencing the way that Lexus engineers have combined analogue and digital, the traditional and cutting-edge, in their use of materials and technology, Joel Gethin Lewis explains: “That synthesis is something we wanted to echo in our project.” By projecting digital images into the real-world and re-capturing them digitally, the duo created their NX-inspired interactive kaleidoscope that can be manipulated to create shapes and patterns reminiscent of the car’s design language.

The final NX-Perspective project comes from London-based Studio XO, a fashion technology company that reimagined the NX’s design and character in the form of digital fashion for NX-Materialised.

This couture project explores the relationship between man and machine through the use of physical materials and digital technology. “We wanted to explore the human body with the facets of the car being merged upon it, almost as if the machine had taken over the body for a period of time,” reveals Studio XO’s creative director Nancy Tilbury.

The NX made a striking first impression, inspiring Studio XO with its front end and spindle grille design and beautifully sculpted leather interior.

“We love the idea that you wear a car, so that the interface between the body and machine becomes minimal, or completely non-existent,” says technology director Benjamin Males. “At the moment we live with technology around us, but when we start living with technology in us…who’s to say that one day the car might really understand how you feel, where you want to go and [you can] actually have a synergetic relationship with such an important part of our modern life.”

Explore the NX-Perspectives campaign at the dedicated website, where you can also find out more about the dramatic and exciting Lexus NX crossover.