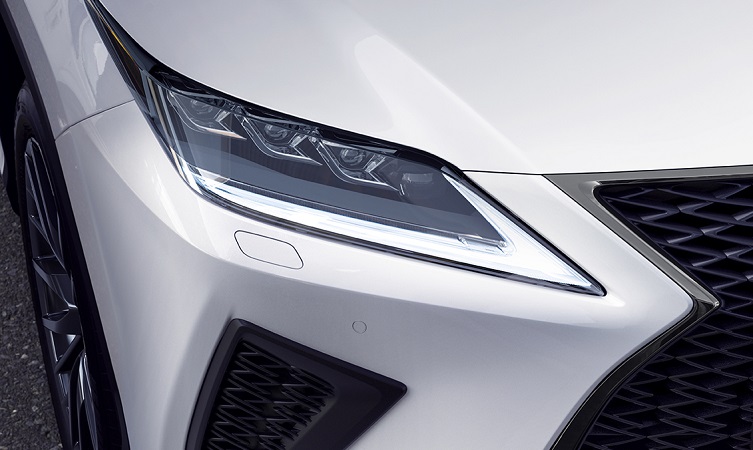 Lexus is a renowned pioneer in automotive lighting technology. We were the first manufacturer to introduce LED headlights (2007 Lexus LS 600h) and the first to produce adaptive high-beam headlights (2012 Lexus LS). Both systems delivered significant improvements in night-time visibility and therefore road safety, as well as reducing any stress experienced by the driver.

These qualities are further enhanced with the imminent arrival of the revised Lexus RX 450h, which introduces the next generation of world-first Lexus headlight technology – BladeScan adaptive high-beam light distribution.

How does this new technology work? And in what ways is BladeScan more effective than existing adaptive lighting technologies?

The existing Lexus adaptive high-beam system consists of an array of LEDs arranged in two levels on each side of the vehicle: eight units at the top and 16 units at the bottom. The area of high-beam illumination in front of the car is then altered in real-time by controlling the light emitted by each diode so that drivers of approaching vehicles are not blinded. Such an array has a controllable area of illumination that is typically accurate to within 1.7 degrees.

BladeScan technology, however, delivers more precise photometric control of the area of illumination in front of the car, being accurate to within 0.7 degrees. It also offers a broader distribution of light to brighten areas that would not normally be illuminated with a conventional high-beam system.

While rival systems have substantially increased the number of LEDs to improve headlight resolution, the new Lexus technology relies on a more cost-effective array of LEDs on each side of the car – ten in the case of the RX. And everything is contained within a compact module located within the inner corner of each RX headlight, alongside the familiar triple-eye LED units.

Rather than shining light their light forwards, the LEDs within each BladeScan module cast their light diagonally across two blade-shaped mirrors rotating at 100 revolutions per minute. The mirrors are used to precisely control the shading effect and reflect non-blinding light into a lens, which then irradiates the adapted beam through a lens and onto the road ahead.

Using this new technology, Lexus engineers say that RX drivers will enjoy an expanded and more natural spread of light. They should also be able to identify pedestrians near the shoulder of the road at night from a distance of 56 metres (32 metres previously).