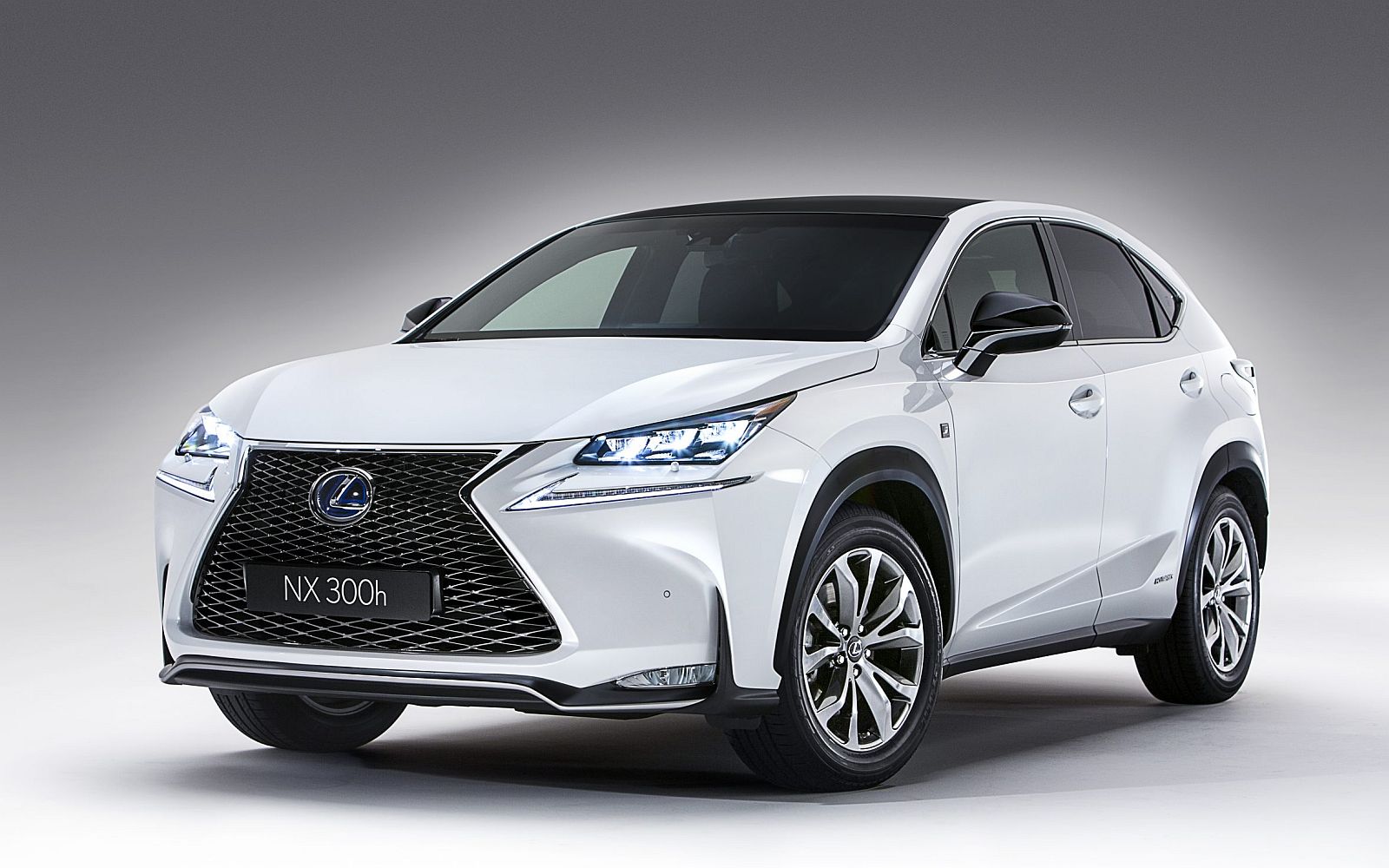 The Lexus NX is one of the most popular models in the brand’s history. Lexus pioneered the premium SUV segment with the original RX in 1998 but showed patience before launching its smaller sibling, the all-new Lexus NX. Arriving in the UK in October 2014, this compact premium SUV was developed during a time of phenomenal demand for such lifestyle-oriented family vehicles, and Lexus had been carefully studying the crossover segment to ensure its new offering exceeded expectations.

Inspiration for the design and functionality of the Lexus NX was primarily drawn from urban sports gear — watches, bikes, fashion and such like — rather than the automotive industry. Hints as to how these complementary fields influenced the brand’s L-finesse design language were provided by the Lexus LF-NX concept (above) presented at the Frankfurt and Tokyo motor shows during 2013.

Little changed in the translation from concept to production. The sharp, athletic tailoring of the bodywork immediately stood out, gifting NX with the most radical and distinctive design within the contemporary Lexus line-up.

The NX was constructed in Japan in the Lexus Miyata plant (below) using techniques pioneered in the development of the IS saloon. It featured a relatively low roofline, cab-forward stance, and flared wheel arches fused to a diamond-shaped body, while the door handles were unique in having no visible key hole to disrupt the sculpted lines. NX was also the first Lexus to introduce widespread use of low energy consumption LEDs so that its lighting signatures could help define the overall design.

Despite its sleek appearance, the NX offered an uncompromised interior with best-in-class measurements in critical areas such as front-to-rear couple distance, head clearance and rear knee room. Measured using VDA criteria, the boot capacity was 475 litres. But of greater interest to some was that the luggage compartment was wide enough to fit a golf bag sideways rather than diagonally. In addition, NX was the only car in its segment to be provided with a spare wheel as standard.

In terms of its aesthetic, the interior aimed to combine the structural beauty of a high-performance machine with materials and textures that were both luxurious and functional. As a result, the centre console featured a prominent silver frame, while the faces of the analogue clock and dashboard instruments had a matching brushed aluminium effect. These were juxtaposed with contrasting finishes such as cloth, leather, wood and carbon fibre.

Thought was put into the selection of materials for functional areas such as the cup holders, where high-friction rubber not only subdued noise but allowed the driver to open a twist-cap bottle one-handed. Usefulness was also seen in the inclusion of a wireless smartphone charging tray, 360-degree view monitor and 6.2-inch head-up display, while NX was the first vehicle in the world to use Clari-Fi audio-enriching technology to restore lost depth to all types of compressed, digital music sources.

Safety was prioritised by including radar-controlled systems that had active, passive and preventative safety features. NX was the first Lexus to receive these advanced technologies in the UK market.

For the first six months, the NX was only available with the proven 2.5-litre petrol-electric hybrid powertrain offering a total system output of 195bhp. But this efficient package could be specified in either front-wheel drive (single electric motor) or E-Four all-wheel drive (two electric motors) formats depending on customer requirements. Both versions featured a new pre-loaded differential across the front axle to limit torque imbalance between the wheels, while E-Four models could optimise torque distribution between front and rear in reaction to prevailing conditions.

Equipment grades available from launch commenced with the front-wheel drive only ‘S’ and culminated in ‘Premier’ via ‘Luxury’ and ‘F Sport’. Of these, F Sport was the most immediately identifiable thanks to its dedicated exterior and interior design elements, including, rather unusually for an SUV, a G-force sensor within the multi-information display.

Further emphasis on the sporting character of NX arrived with the UK introduction of the NX 200t in March 2015. Available exclusively in F Sport trim with all-wheel drive, NX was the first model to benefit from our all-new, 235bhp 2.0-litre turbocharged direct injection petrol engine (above). In contrast to the continuously variable transmission fitted to the full hybrid NX 300h, the NX 200t was paired with an equally new six-speed automatic transmission. It also featured a mechanical all-wheel drive system that could direct up to half the available torque to the rear wheels.

In less than two years, NX had sprinted from its introduction to being the most popular model in the contemporary Lexus line-up, accounting for more than 30% of all European sales. To maintain this momentum, Lexus introduced some gentle specification changes in October 2016 for the 2017 model year, including a generous Premier Pack option and a new Sport grade (above). This newcomer stood out with ‘black pack’ exterior features applied to the spindle grille, mirror housings and alloy wheels.

A year later, in September 2017, the niche NX 200t was discontinued in the UK. It was the first move in a strategy that prepared the way for a more extensive refresh that arrived in showrooms two months later. The first update in Lexus NX history comprised a comprehensive package of revisions and improvements that covered styling, safety, dynamics and equipment, Lexus was careful to preserve the visual impact that had proved so appealing to customers.

The spindle grille was subtly evolved to align more closely with the newly released fourth-generation RX, which in turn necessitated the reshaping of the front bumper in order to blend fluidly into the bonnet and doors. The internal arrangement of the LED headlights was redesigned to mimic that of the new LC, while the indicators now illuminated in a sequential sequence. At the back, echoes of the spindle shape were introduced into the rear bumper and the elongated rear lenses now featured a black garnish. The new NX also gained the convenience of a powered rear door with no-touch opening and closing function.

Inside, the most prominent change was the increased size of the central multimedia display, up from 7.0 to 10.3 inches across. Detail changes were also applied to the centre console, including the consolidating of various buttons to four easy-to-operate toggle switches, a larger touchpad, and a larger analogue clock with GPS control that automatically adjusted the time as the car drove through different time zones. Hidden away but of great value to customers was the provision of the latest Lexus Safety System+ as standard equipment across the range.

Due to popular demand, Lexus brought back the NX Sport grade in June 2018, introducing eye-catching black exterior details and dramatic bronze alloys at a competitive price point. Interestingly, the combination of a thorough refresh and appealing equipment grades helped make 2018 the most successful year for NX since its launch. By the end of the year, the previous peak in 2016 had been eclipsed by almost 25%.

For the 2019 model year, Lexus standardised E-Four all-wheel drive across the NX range and tweaked the specification to follow the same grade pattern as the RX. A simplified structure of NX (base), F Sport and Takumi grades was introduced, each of which could be enhanced with various equipment packs. A few months later, in April 2020, an entry-level front-wheel drive model returned to tap into the company car market. Compared to the all-wheel drive model, the new model sat in a lower tax band and could save 40% tax rate payers more than £800 over three years.

From its launch in 2014, the NX established itself as a key player in the Lexus range, quickly settling into sales of more than 4,000 units every year in the UK. By the end of production of the first-generation model, Lexus will have sold almost 30,000 examples in this country, many of which were to customers who were new to the brand.

It is hoped that existing owners will be tempted to upgrade into the all-new second-generation Lexus NX (above), which introduces new design, powertrains and technologies as well as comprehensively improved dynamic performance thanks to the model’s new GA-K platform. Now equipped with our fourth-generation hybrid electric powertrains, the new NX 350h and plug-in hybrid NX 450h+ will open the next chapter in the history of the Lexus NX.