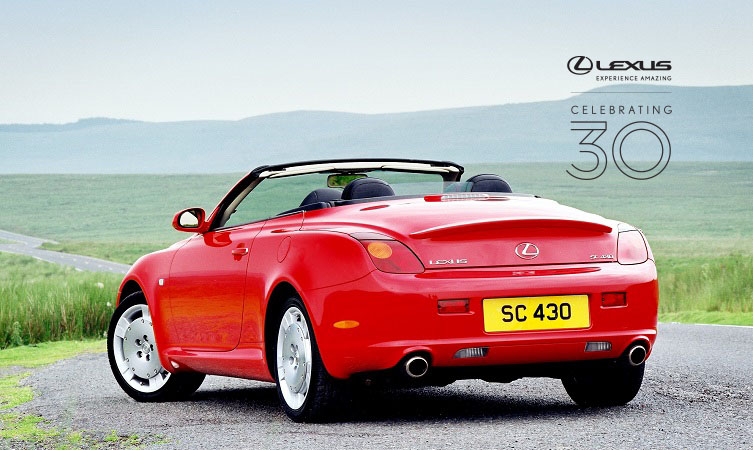 Soon after reinventing the luxury saloon car market with the debut of the LS 400 in 1989, Lexus indicated to the automotive press that it was about to launch a complementary model. Lexus had set its sights on the mid-size luxury coupe market. And just as the flagship LS 400 was clearly aimed at buyers of the Mercedes-Benz S-Class, the Lexus SC was aimed squarely at the SL, not to mention similar models such as the Honda Legend coupe, and Infiniti M30 coupe.

As coupe models were particularly popular in the North American market, development of the exterior was handed to Toyota’s Calty Design Research centre in California, USA. Work began back in 1987 and was approached in a unique way, using organically-shaped plaster moulds that were then scanned and stretched into coupe-like shapes on a three-dimensional computer imaging programme. The final design was signed off at the end of 1989.

Aside from one sweeping swage line running down the side, almost every surface on the first-generation SC was curved. It was instantly seen as an influential design, pre-dating many other vehicles that subsequently adopted such organic shapes. With a drag coefficiency of just Cd 0.31 it carved a neat slice through the air too.

As is typical of the breed, the new Lexus SC featured a front engine, rear-wheel drive platform, but also had seating for up to four people.

The suspension was a newly developed double wishbone system on all four corners, while high-grade versions were equipped with electronically controlled air suspension as standard. Also available was an active chassis package that could reduce changes in vehicle attitude when cornering. Included in this system was active four-wheel steering that controlled the orientation of the rear wheels and stabilised the vehicle’s attitude.

The new Lexus SC made its debut in the US in June 1991 as a 1992 model and appeared simultaneously in Japan as the third-generation Toyota Soarer. Engine options differed slightly depending on the market but the launch unit on either side of the Pacific was the highly acclaimed 4.0-litre V8 powerplant already found in the LS.

During its impressive nine-year production run, the first-generation SC received only minor visual alterations – a testament to the enduring original design. Indeed, the most important change was the adoption of variable valve timing across the range in 1997 (1998 model year car pictured above), which improved the power and torque figures of all engines. The model was never supplied officially to the UK market but it is no stranger to British roads as many have been imported personally.

On to the second generation

The appearance of the second-generation Lexus SC (fourth-generation Toyota Soarer) was first proposed at the 1999 Tokyo Motor Show as the Sport Coupe concept. Its retractable hardtop construction indicated that the new car was being designed as a coupe-convertible; a first in the model’s history. The production version debuted at the Paris Motor Show in 2000 but the model was not officially released until April 2001 so its launch could coincide with the 20th anniversary of the Toyota Soarer.

The new interpretation was a collaborative effort between studios in Europe and Japan. However, chief designer Sotiris Kovos apparently drew most of his inspiration from the timeless Italian Riva powerboats found on the Cote d’Azur. The elegant styling was therefore characterised by a compact cabin, flowing surfaces and a tight lower body.

In contrast to previous Soarer generations, the model’s characteristically long, sleek look was abbreviated so that the new car was now 345mm shorter. Considering the additional boot space needed to accommodate the folding aluminium roof, this also meant that the model’s traditional four-seat layout had to be constricted to a 2+2 format.

What the cabin may have lacked in size it made up for in opulence and specification. Leather, brushed aluminium, and highly polished bird’s eye maple and walnut burl woods were used liberally throughout to enhance interior tactility and appearance. Meanwhile, both the air conditioning and nine-speaker, 240-watt Mark Levinson audio system had automatic controls for maintaining optimum settings whether the roof was open or closed.

Unlike its predecessor, power for the new car was consolidated to just one engine, the 282bhp 4.3-litre V8 shared with the LS 430, and one five-speed automatic transmission (six-speed from 2006 model year onwards). With 419Nm of torque on tap the engine could seamlessly thrust the car to 62mph in 6.4 seconds and on to a maximum speed of 155mph, while offering up to 31.4mpg on the extra-urban cycle.

The chassis once again made use of double wishbones all round, a derivation of that found on the GS 430, while the SC was the first Lexus to use an 18-inch wheel. Run-flat tyres were specified to eliminate the need to carry a spare wheel and thereby improve luggage capacity. It was a well-balanced machine, too, displaying a near-perfect 48:52 split front to rear.

A mild facelift was carried out from 2006 model year cars onward (pictured above), associated visually with a change in wheel design. In the Japanese market, this update coincided with the inauguration of Lexus in August 2005. Henceforth, all marketing for the Soarer was discontinued and the model was rebranded as the Lexus SC 430, bringing Japan in line with the rest of the world.

Production of the second-generation Lexus SC also lasted nine years, concluding in July 2010. But the model continued to be used by Lexus in its domestic Super GT motorsport campaign until the end of the 2011 season in place of the outgoing Toyota Supra. The racing SC prototype (see image above) was revealed in February 2006, just a month ahead of its debut in the GT500 class at Suzuka circuit. It was immediately competitive, winning its opening race and then going on to achieve podium finishes in every following year.