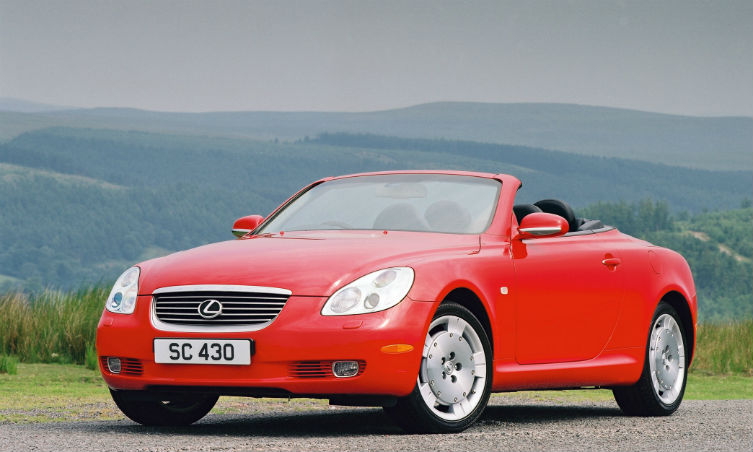 This week’s #ThrowbackThursday takes us back to the introduction of a high-performance flagship within the Lexus line-up.

As part of a mild refresh introduced in 2000, the second-generation GS was joined by the exciting new GS 430 model. Shoehorning the latest 4.3-litre V8 from the LS 430 under the bonnet, the GS 430 offered discerning drivers an unrivalled combination of performance and luxury. Like an iron fist in a silk glove, this 283bhp engine propelled the car from zero to 62mph in just 6.3 seconds and had to be restrained to a top speed of 155mph.

Also notable was the fact that the GS 430 was available at a price that undercut the slower GS 300 Sport previously available.

Bookmark this page and come back here every Thursday for the following week’s instalment. Or search for #ThrowbackThursday on our Facebook, Google+ and Twitter feeds.

Having looked at the triumphant entry of Lexus in the opening round of this season’s Super GT series, we thought we’d use #ThrowbackThursday this week to remember IS 200 in the British Touring Car Championship.

Back in 2001, the IS 200’s chief engineer, Nobuaki Katayama, had travelled to the UK to attend the press launch of the new IS 300. Knowing of his interest in motorsport, we invited him to test-drive the new IS 200 being raced in the BTCC that year by TotalMotorSport Racing. So keen was he to try the stripped-out 270bhp machine that he delayed his return to Japan in order to give it a thorough shakedown around Pembrey Circuit in South Wales.

Having promised to keep a close eye on the team’s performance during the season, Katayama would have seen it become the best non-works car in the championship, frequently setting faster times than many big budget efforts.

With Milan Design Week in full flow we thought this week’s #ThrowbackThursday presented an opportunity to remember a past winner of the annual Lexus Design Award.

A conceptual interpretation of the underlying principles of Lexus L-finesse design philosophy (LINK), Fujimoto-san’s dynamic installation brought together space, sound and lighting. At its centre was this phenomenal full-size model of the Lexus LF-A concept sculpted in clear acrylic. Incredibly detailed and cleverly lit to highlight its intricacy, the model even reproduced much of the drivetrain parts, interior and engine (LINK).

In January 2003, a little over two years before delivery of its first production car with Lexus Hybrid Drive, the manufacturer unveiled details of this revolutionary hybrid powertrain.

Hybrid vehicles were already in existence in 2003 but Lexus Hybrid Drive promised a revolution in that it would build on the well-known strengths of these systems – low emissions and high fuel economy – by adding the benefit of outstanding performance and modular packaging. It would do this by operating at almost double the voltage of existing hybrid systems, thereby generating more power with greater efficiency, while its modularity gave Lexus the option of creating a hybrid car with all-wheel drive.

In practice, the Lexus RX 400h model that debuted this technology in March 2005 used a V6 petrol engine that, with the assistance of the hybrid system, offered the performance, power and torque of a V8, yet the fuel economy and emissions figures similar to a contemporary four-cylinder engine.

This week’s #ThrowbackThursday remembers the first time that Lexus was included in the influential J.D. Power Customer Satisfaction Study… and how the results embarrassed the rest of the industry.

Given this outstanding result, it came as no surprise that Lexus immediately became the top brand for customer satisfaction with an index value of 867 out of 1,000 when the industry average at the time was 784.

The publishing of this study for the UK market corroborated the satisfaction that Lexus owners elsewhere in the world also felt. For example, by 2001, Lexus had ranked first in the J.D. Power study in the United States for the past eight years!

Read more: How Lexus quality begins at the factory

For this week’s #ThrowbackThursday we remember the Lexus SC 430, the first-ever Lexus convertible.

Powered by the new 4.3-litre V8 that would also be installed in the third-generation LS it delivered muscular performance, but careful airflow management when the hard top was retracted meant that it was only excitement levels that got raised; strategically placed deflectors ensured that immaculately coiffured hairstyles remained unruffled at speed.

The SC 430 also featured one of the world’s most advanced climate control systems, which helped to maintain the desired temperature whether the car was being driven as a coupe or cabrio.

See more: The history of the Lexus SC

This epic drive from Nordkapp in Arctic Norway to Cape Tarifa in southern Spain was dispatched by a three-man team driving a 2004 Lexus IS 300 SportCross in just 55 hours 24 minutes, beating the previous record by 31 minutes. No penalty points were accrued during the challenge and the SportCross didn’t miss a beat, averaging 62.51mph across the event. The team also recorded a best average fuel consumption that was over six miles-per-gallon more than the car’s official combined figure.

We rewind the clock to the first European showing of the second-generation Lexus RX.

In this week’s Geneva Motor Show it was revealed that the eagerly anticipated new compact Lexus SUV will be called the NX.

But almost 11 years ago to the day the crowds in Switzerland were treated to their first glimpse of the all-new second-generation RX. Evolutionary in styling, it was more svelte and efficient than before, but the model became especially renowned for pioneering the adoption of a hybrid powertrain in the luxury car market.