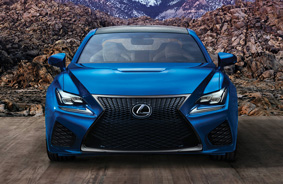 The letter F has held special significance among Lexus owners and engineers alike. Representing the word flagship and referring to Fuji Speedway, chief test site of Lexus, the sub-brand has become synonymous with speed, precision, innovation and technological progression.

The Lexus F project was initiated by one engineer, Yukihiko Yaguchi, who in the early Noughties pursued a personal dream to create a car with driving capabilities he could proudly announce as the best around. The prototype ‘IS F’ model he built attracted significant attention, first from other Lexus engineers who would soon join forces with Yaguchi on the project, and then from top Lexus executives, who recognised the engineer’s personal work as the beginnings of an official foray into the high-performance vehicle market.

“What drove me to kick-start this project was a simple aim to build a car that would embody new Lexus ideals,” Yaguchi says. “To that end, we focused our attention on three things: steering response, sound and acceleration – key factors that make the driver feel connected to the car.”

Now, a decade after that first prototype was built, Yaguchi and his team have unveiled the RC F, the second model in the Lexus F range.

Equipped with a 5.0-litre V8 engine, the RC F was revealed at the Detroit Motor Show earlier this year and is an ultra-high-performance coupe that produces over 450 horsepower.

Proclaimed as the most powerful V8 in the Lexus line-up to date, the powertrain also comes with a torque-vectoring differential (TVD), a world-first engineering feature for a front-engine, rear-wheel-drive vehicle. The system is designed to maximise driving pleasure by providing stability, nimble steering response and dynamic circuit performance.

“The RC F presented us with a tougher challenge than the IS F,” Yaguchi admits. “We were, of course, under pressure when working on the IS F. But the weight of expectation was far heavier this time, now that we’re in the second chapter of the F legacy. We had to create something much, much better than our previous models to impress. That was tough, to say the least.”

Yaguchi is modest, but his efforts have paid off. The RC F’s steering outperforms that of its predecessor, thanks in part to the car’s aerodynamic packaging, its highly sophisticated underbody and upgraded suspension. An electronic rear wing – a feature lifted from the LFA – has been built into the boot lid to be deployed when the car exceeds speeds of 50mph. Bespoke bodywork abounds throughout, while the 19-inch alloy wheels and updated spindle grille lend the RC F immense kerbside appeal.

“This car is purpose built for the skill level of all driving enthusiasts, especially with the TVD,” says Yaguchi with a smile. “With this car, you can cruise through town, but you can also have fun on a circuit if you’re into that sort of thing.”

Read more: Development story of the Lexus IS F