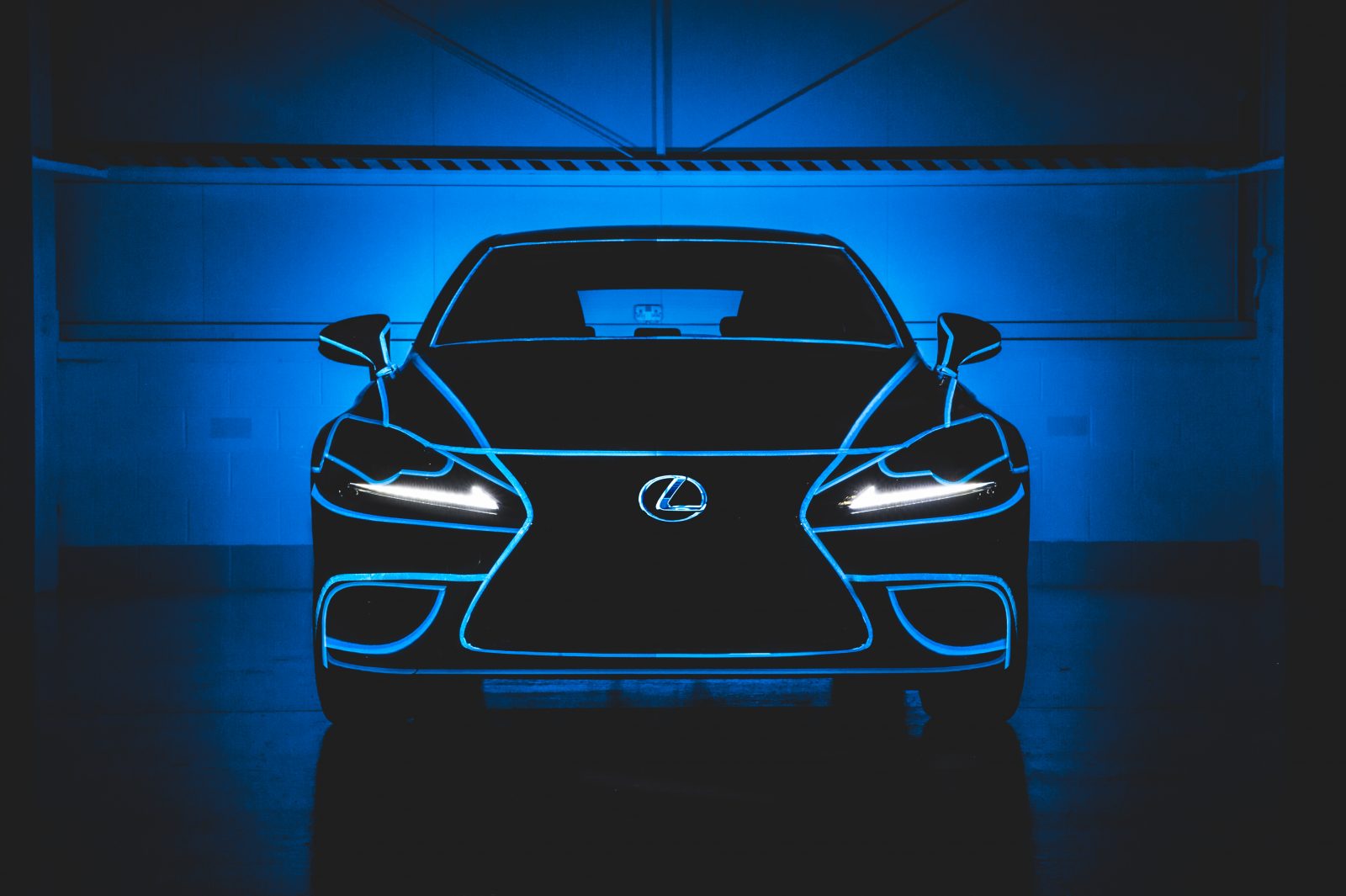 The striking Lexus IS images contained within this post form the second set of amazing photographs in our trilogy of experimental shoots, which combine unconventional light sources with a social media powered reveal.

The first of the three shoots – our fifth anniversary LFA light painting gallery – was gradually unlocked by Lexus Twitter fans last week who retweeted a teaser image until it reached 100 retweets.

This week it’s the turn of the Lexus IS. We’ve highlighted the model’s pin-sharp lines in a striking pair of images. IS owners were given an exclusive preview of the images via Twitter direct message in exchange for tweeting us a photograph of their car.

To create our second set of photos, we took a Sonic Titanium Lexus IS 300h Premier and applied luminous blue vinyl tape to the model’s shutlines, bodyshell creases and to the edges of its headlights and front ‘Spindle’ grille.

Above: Our IS during set-up

The styling of the IS makes it at once perfectly suited to our taping treatment and extremely difficult to work with. The model has an array of delicately sculptured lines such as the pronounced kink at the base of the rear doors. These look fantastic when highlighted by the tape, but make the process of applying it a long one because the vinyl is not particularly malleable to swooping panels and is prone to tearing.

In profile, there are 12 lines on or across the car and a further four at its edges, the latter form the car’s three-box shape. Up front, there is an astonishing 17 lines due in most part to the central grille and L-shaped daytime running lights which are mounted independently from the main light clusters. Applying the tape is a painstaking process and it takes a team of four people two hours to tape just one side of the IS and the front end – 30 metres of tape is used.

To heighten the tape’s luminosity, high intensity flashes are blasted at different sections of the car. The images are then put together to form one image using Photoshop. The blue backdrop in the front end image is actually the beam of the car’s brake lights; the hue has been altered to match the colour of the tape and reflect the fact that the IS in our photos is a hybrid.

What do you think of the photos? Is there a particular photographic treatment or post-production technique that you would like to see us apply to a Lexus model?  We’re always on the hunt for new and exciting ways to show the world the fervent styling of our cars, so if you’ve got an idea that’s too good to keep secret leave a comment below and we might just bring it to life.

The concluding part of our experimental shoot series puts the spotlight on the CT and will be released first on Twitter and then across all of our social channels next week.