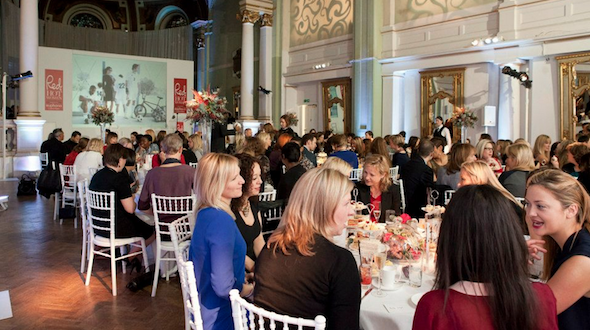 The event celebrates successful sports and businesswomen – and this year attracted a glittering cast of stars and commentators.

This year’s awards were the biggest yet:

The Pioneer Award went to the founders of All Walks Beyond the Catwalk. Debra Bourne, Erin O’Connor and Caryn Franklin.In 2009 the team of three created allwalks.org to encourage the fashion industry to think about body image.

The Fashion Award was given to the Outgoing Buying Director for ASOS, Caren Downie who has seen great success with the fashion brand. Caren encourages her team to make ‘brave decisions’ on a daily basis which has proved to be a turning point for the ASOS brand which has grown threefold since her joining.

The Ethical/Eco Award was given to Livia Firth, Creative Director of eco-age.com and co-founder of the Green Carpet Challenge. Eco-age.com is an online-only shop selling eco-friendly goods.

The Blogger Award went to Helen McGinn who, whilst working for Tesco, recommended wallet-friendly wines to her friends. The idea grew to open these insights to the public and as such, knackeredmotherswineclub.com was born.

Sportswoman of the Year went to Nicola Adams, the first female boxer to represent England. She is also the first British woman to win a championship medal and the first British female athlete ever to win an Olympic boxing gold. We think that’s quite enough to win yet another prestigious award this year!

The Community/Charity Award went to Doreen Lawrence OBE who received a standing ovation for her on-going work after the death of her son, Stephen, in 1993.

The Media Award 2012 went to Clare Balding for her work with the 2012 Olympics and her continued  reporting of sports coverage from around the world.

The Posthumous Media Award was give to Marie Colvin who sadly died on February 22nd this year. She was working in Syria when a shell exploded. Marie spent 30 years reporting from war zones around the world as a foreign correspondent.

The Power Part-Timer Award was given to Dr Pia Ostergaard who is a Geneticist at St George’s Hospital, London. After having two children Dr Ostergaard went back to working three days a week and now researches primary lymphedema, a condition affecting the lymphatic system.

The Creative Award went to Christie Watson, Author and resuscitation nurse. She’s been commended for balancing her life not only raising her children, which she says inspire her on a daily basis, but also a full-time career and a novelist.

The Rose Gray Food Pioneer Award was given to Monica Galetti, Senior sous chef, Le Gavroche. Since 2000, Monica has worked under Michel Roux Jr at the two-Michelin-starred London restaurant where she manages 16 staff.

The Digital and Start-up Award went to Kathryn Parsons of Decoded. Her company aims to teach people how to code computers…in one day!

Guests and winners were driven to the event in the new Lexus RX, the luxury SUV combining sports performance with hybrid technology.For a video of the event, see the Red Magazine’s website here.

Congratulations to all those who were nominated for an award this year and, of course, to those who won. Lexus is proud to support such a fine and prestigious acknowledgement of talent and work in women.