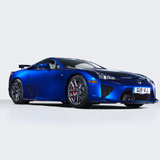 If you’ve ever pushed an empty wheelbarrow up a hill, and then a full one, you’ll know only too well the relationship between power and weight.

The rate at which a car can push itself along is determined by its power-to-weight ratio, a numerical expression of total weight divided by the engine’s total power output. The less weight each unit of power has to push, the faster a car will be.

Power (560PS) and weight – or more accurately, the lack of it – are the twin secrets of the Lexus LFA’s success. Most road vehicles need to propel around 10 kg for every 1PS of power they produce. The equivalent figure for the Lexus LFA is just 2.6kg.

There are cars with even better power-to-weight ratios than the LFA’s. Formula One cars, for instance: they ask each PS of power to push less than 1kg. But then, not many Formula 1 cars come with a sumptuously equipped cabin, state of the art navigation and sound systems, or a penlight in the glove box door. Or a glove box, come to that.

The LFA uses an unusually high percentage of lightweight materials like aluminum alloy, titanium, magnesium – and, constituting 65 percent of the body by mass, carbon fibre. Mother Nature is a generous provider of raw materials, but sometimes we humans go beyond nature to create some clever stuff of our own. In the pecking order of these ‘supra-natural’ manmade materials, carbon fibre is special.

Carbon is one of the most commonly-occurring substances in the universe, but it has a correspondingly cosmic range of physical properties. At one end of the scale, carbon is the second most abundant element in the human body. At the other is the diamond, one of the hardest substances in nature.

Somewhere on this scale between super-hard gemstones and soft tissue we find carbon fibre. First synthesized in the late 1950s, it spins together incredibly fine filaments of pure carbon (around 20 times thinner than a human hair) to form a yarn which can then be woven into a supremely light and yet massively strong fabric with a near-total immunity to thermal expansion. It can be used as a fusing agent in the most delicate skin grafting operations, or in aerospace and military applications where both strength and weight need to be optimised.

Blended with high-grade plastics, this CF fabric becomes a carbon fibre-reinforced polymer (CFRP). CFRP’s extreme resistance to bending force makes it the natural choice for high-performance cars, but the highly exacting and expensive process of creating these remarkable polymers is a commercial reality too far for most manufacturers.

Fortunately, cost wasn’t a key consideration in the LFA project. The car’s composition was established on the simple basis of fitness for purpose. If the use of a special material contributed in any way to the car’s performance, the decision to include it was immediately taken. Its bodywork, passenger cell and most of the monocoque chassis are made of carbonfibre composite. Not only is this bodyshell extremely rigid, it’s up to 220 pounds lighter than an equivalent aluminium body, with no loss of strength.

Every opportunity to maximize the benefits of carbon fibre was minutely examined and assessed. Parts of the main LFA cabin monocoque were assembled by skilled Lexus craftsmen from ‘prepreg’, an extremely stiff, stable and lightweight material painstakingly produced from carbon fibre woven with resin powder. Woven fibre for certain critical roof and crumple zone components was created in-house by Lexus.

Composite construction is not the accountant’s way to build a car. It’s the engineer’s way, the ultimate cost-no-object combination of a craftsman’s skills and cutting-edge materials devoted to the creation a stronger, lighter component. Even the LFA’s bonnet strut is made of carbon fibre. And the ignition key.

The result is an electrifying level of road performance that’s about as far removed from a wheelbarrow as you can get.