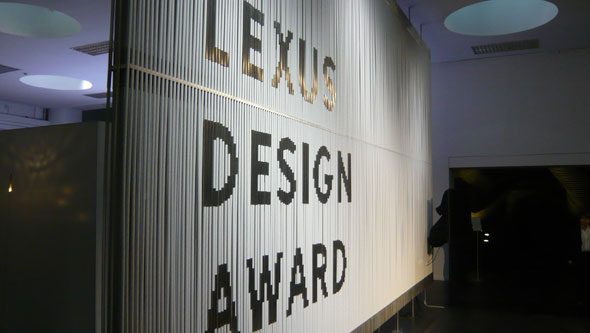 Walking up the steps to the reception area of the Lexus Design Amazing 2013 Milan exhibition in the grand Museo della Permanente gives no clue to the dramatically large and swirling sculpture that awaits deep inside.

Within a deliberately dark, triple-height room – the size of a large school gymnasium – the eerily uplit interconnecting pathways of the sculpture are large enough to walk on. Indeed you can in parts, but collectively they tower over any viewer, who is also serenaded by the sight and sound of dry ice sporadically firing out from certain sections.

Supervised by world-renowned and Pritzker award-winning architect Toyo Ito, the installation formed the centrepiece of the event and sought to express “manifestations of flow as they relate to people and nature” referencing the way streams find their way through the landscape and how cars navigate the built environment of the city.

The space was designed by one of Ito’s proteges Akihisa Hirata, used 100 square metres of wood to clad and took five months to build. Its ultimate point is two-fold: to help create an exhibition of “unexpected encounters” but also to potentially inspire future Lexus car design.

The second room of the Lexus Design Amazing 2013 Milan exhibition featured the 12 winning design ideas from the first Lexus Design Award as adjudged by a panel including acclaimed artist-designer Jaime Hayon and President of Lexus International himself Kiyotaka Ise. Tasked with coming up with a design around the theme of ‘motion’, the successful finalists came from as far afield as Israel, Japan and Iran and their work ranged from an electric scooter that folds away in the manner of a Swiss Army knife for easier carriage, to a fun and functional bridge that has conventional steps and a kid’s slide on both sides, so users can choose which way to go over it, depending on their mood.

Only the top two designs chosen were developed into prototypes and displayed in full-size and 3D though. The first display showed a series of porcelain cups and bowls made from an innovative origami paper mould manufacturing technique while the second featured a motion-sensing mechanical rice field with LED ears that moves and lights up in an incredibly natural way when people walk past.

All in all then, the Lexus Design Amazing 2013 Milan exhibition proved to be an inspiring and challenging space that helps further Lexus’s ambitions to target, nurture and promote great design.

Biog
Guy Bird is a freelance writer and editor specialising in cars and design for the likes of CAR magazine, The Daily Express, Esquire and Car Design News. He attends the world’s auto shows from Paris to Tokyo and has road-tested the vast majority of vehicles available in the UK over the last 18 years. www.guybird.com