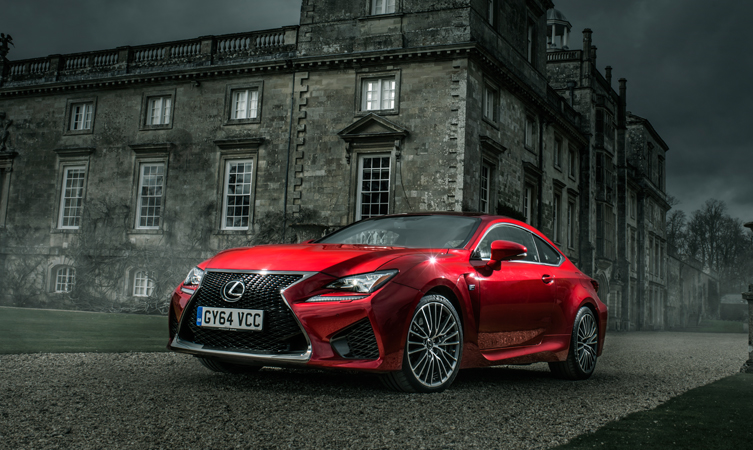 In 1886, Robert Louis Stevenson brought the world The Strange Case of Doctor Jekyll and Mr Hyde, the story of a mild-mannered doctor and his evil alter-ego.

In 2015, Lexus is retelling the story. We took the RC F to Wilton House in Wiltshire to show the dark and light sides of Lexus’ sports coupe – with help from photographer GF Williams. The ancestral home of the Earls of Pembroke is a beautiful sight in the sunshine, but in the fading light of an approaching thunderstorm it’s a forbidding, looming presence.

Similarly, the Lexus RC F is both sides of the coin – two distinct personalities occupying a single body. Its Dr Jekyll is every inch the gentleman; leather seats, the latest state-of-the-art comfort technology and all the luxury you’ve come to expect from Lexus.

But Mr Hyde lurks beneath that bonnet – five litres of V8 fury, 471 snarling horses waiting to be unleashed through the rear wheels. The chassis is built for comfort and quietness when on the motorway, but push it hard and you’ll find it’s created for incredible performance.

Even within the engine itself, there are two characters to be found, thanks to some clever technology. When cruising in the RC F, the engine uses what’s known as the Atkinson cycle – a method of combustion designed to produce maximum efficiency. But when your right foot wants a bit more savagery, the RC F’s V8 switches imperceptibly to another combustion method called the Otto cycle, designed to extract the maximum amount of performance.

The engine, then, is its own story – that of Dr Atkinson and Mr Otto. It’s packed with tech, but at the same time has a traditional charm that comes only come from a large V8. As Giles Smith of the Sunday Times said in his review, it is “a package so flagrantly old-school that you expect to throw open the bonnet and find it looking up at you flickering in black and white”.

As complex and aggressive as the exterior is, the interior is the opposite, a pool of simple calm and comfort

Top Gear magazine said: “What we very much could discern instantly was the change in the car’s character when we started playing around with the drive modes. Eco is suitably lazy and understated, the dials a sea of calming blue. But twist the dial to the right, and you enter Sport S mode as a red mist descends on the instruments.”

Road tester Pat Devereux also found a dichotomy between the RC F’s dynamic exterior styling and its calming interior. “As complex and aggressive as the exterior is, the interior is the opposite, a pool of simple calm and comfort, which soothes and supports as you cruise around the city,” he said.

In The Strange Case of Dr Jekyll and Mr Hyde, friendly Dr Jekyll has no control over when Mr Hyde appears. That’s where the RC F differs – the driver can choose at any point whether to be good, or whether to embrace the dark side.