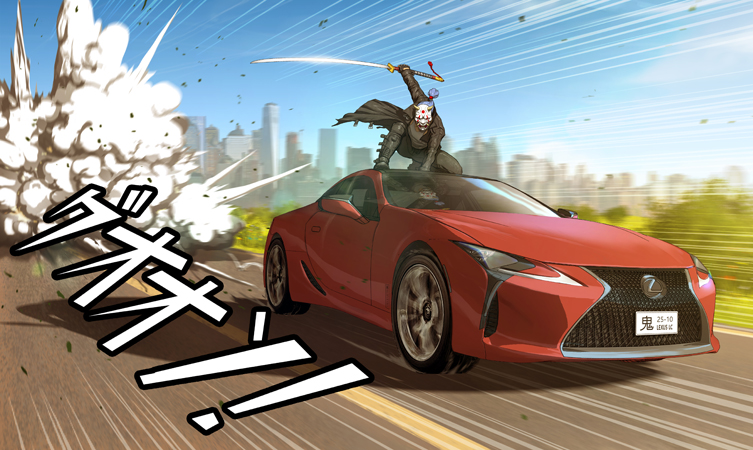 Born in Bulgaria, Daniel’s love of manga began thanks to the anime videotapes that were smuggled in from the west. Since then, he has spent 20 years as a professional illustrator working in several different genres. 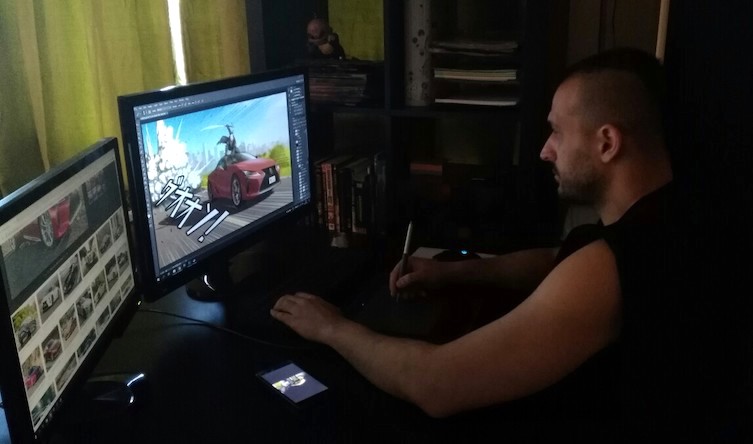 We spoke to Daniel about the inspirations, challenges and craftsmanship behind his Lexus LC manga artwork.

When did you start drawing manga?

I was introduced to anime first. When I was a child in communist Bulgaria it was almost impossible to find any materials that were not part of the communist doctrine. Even so, some things did slip through the cracks and people used to get all kinds of material.


I watched a pirate copy of an anime videotape at a friend’s house when I was about eight years old.  The art style, the cinematography, the choreography, the story, the ideas – it was like nothing I had seen before, and it left a huge impression on me. This was the moment I found my lifetime direction, and I’ve been drawing manga ever since.

How did you become a professional manga artist? Were you taught or self-taught?

I have a classical background in arts, which gave me a good base and understanding of the subject, but when it came to manga I had nowhere to learn it and it was difficult to find any information in Bulgaria, where it wasn’t particularly popular at the time.

I visited every cultural institute’s library, every video rental, everywhere I could think of to find manga or anime.  Most of the videogames in the 1990s were Japanese, so I became good at gaming so that I could see the images in the games, memorise them and later recreate and study them at home. 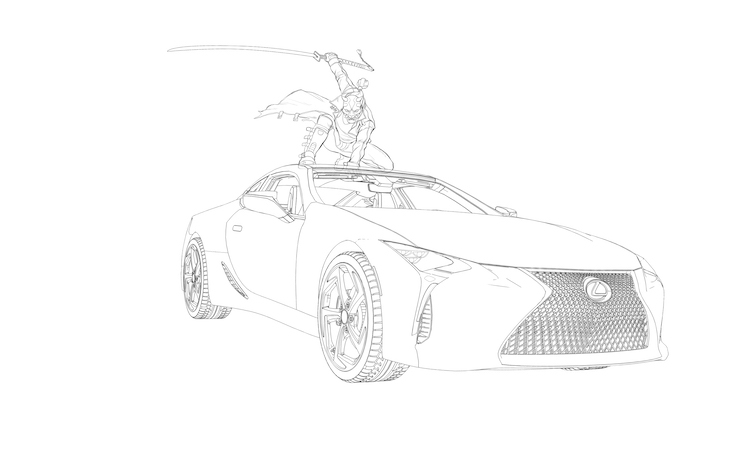 What do you predominantly create manga for?

My works are mainly shonen/seinen oriented, which means they are targeted at young adult males. They contain mostly sci-fi, action, adventure and martial arts.

Which medium do you use to create your manga?

When I started my career, I used classic materials – paper, pencil, inks, paints – but now I am all digital.

I have a lot of favourite titles and artists but I will mention just a few of them:
Katsuhiro Otomo (the creator of AKIRA), Shirow Masamune (Ghost in the Shell), Yukito Kishiro (GUNNM), Akira Toriyama (Dragonball) and all the CAPCOM and SNK artists. 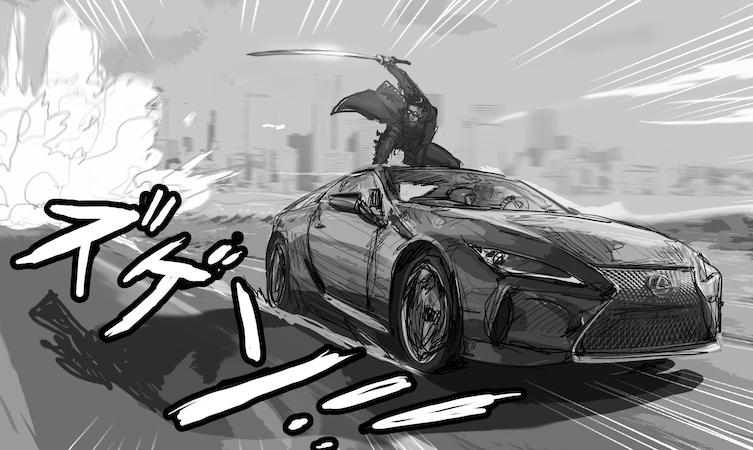 Can you explain how the Manga influence is pictured in your Lexus art?


Manga is recognisable not only by the distinctive facial features of the characters (big eyes, small noses, spikey hair, etc.) but also by many other aesthetic elements.

In this case, I used a heavy perspective of the main object (the car) combined with action lines as a layout of the image. The character design, the pose of the character, Japanese hieroglyphs and colour techniques I have used are typical of many manga and anime works.

What was the inspiration behind your Lexus LC manga?

I was inspired by the task itself, as this was the first time I have been asked to draw a real car within a piece and make it look like a part of a fictional manga/anime story.

It is also heavily influenced by Japanese culture. The main character in wearing an oni mask, which in Japan are worn at festivals to protect from evil spirits. He is holding a nodachi sword (a type of Samurai sword), and the pose of the character has been influenced by martial arts. 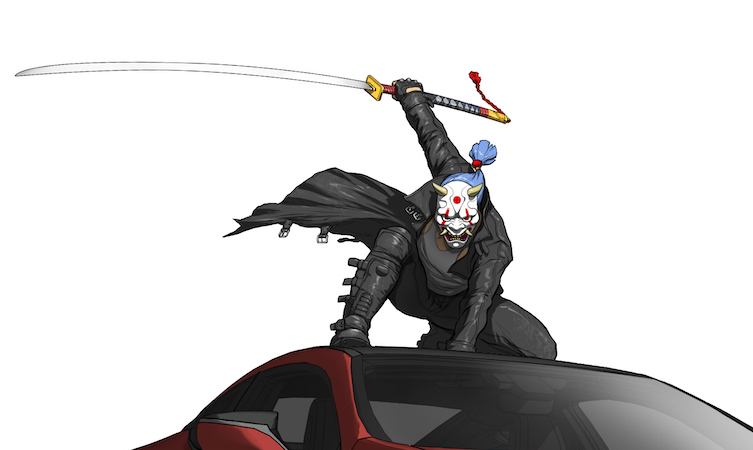 What is the story behind the Lexus LC manga?

The Lexus LC and the protagonist are fighting against injustice. [In my image] the car itself is an autonomous being but at the same time, it also has a symbiotic relationship with the man. That’s why there is no driver behind the wheel. The car is intelligent, self-driving and reliable because you can always count on it.

Why did you choose to portray an oni?

I wanted to represent a Japanese version of a masked superhero, who does things his way. In Japanese culture, some oni demons are protectors and not evil, and they don’t exactly follow the rules, so it was a perfect choice.

What’s the significance of the Samurai sword?


This is weapon is a symbol of honour. When you use a sword it is just you and your opponent. It is not a long spear, where all the bad things happen on the other side, nor it is a bow or a gun that can defeat an opponent before he even has the chance to fight back.


Read more: Discover how the design of the Lexus LC was inspired by the Samurai sword. 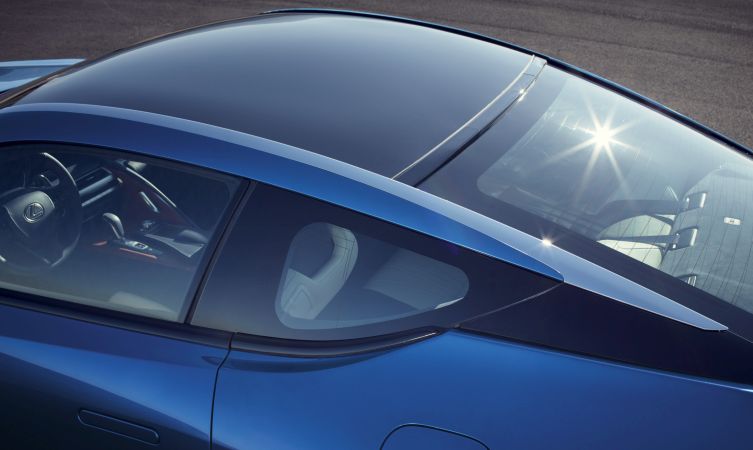 What was the most challenging aspect of creating this Lexus LC Manga artwork?

Drawing the Lexus LC, because it had to be as accurate as possible.

How do you see Manga evolving in the years to come?

With globalisation, the line between Manga and every other art form is beginning to get a bit blurry. Manga is not only Japanese now, and I am proof of that.

What do you think of the Lexus LC as a piece of design?

Elegant and classy without being pretentious.

It’s a term I can only really apply to the people I have learned from.